I Don't Know. You Decide.

Anyway, in 1964, this building went up and stayed there looking like that for a long time, generating lots of arguments about whether or not it was a work of art or a hideous mistake. 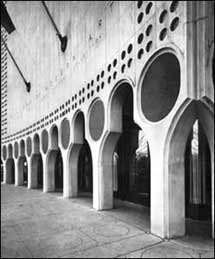 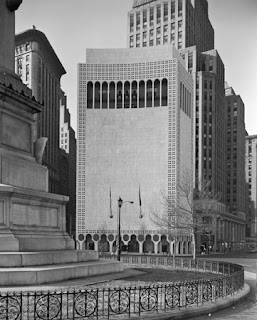 One architecture critic mocked the shapes at the ground level and the building was stuck with the moniker, The Lollipop Building.

I never had any strong feelings about the building one way or the other.  I think the first time I ever saw the inside was some time in the early 90's when it was basically a vacant building that was "maintained" by the city.  It was a real wreck inside, and frankly, the shape and layout of the place made it pretty useless. (Maintain = some guards sat in there every day and kept the vandals from trashing the joint any worse.)  Since there were no windows on most of the building, the only view was from the penthouse.  And it was (and is) great view.  But the room that housed that view was long and narrow and, as far as I was concerned, you couldn't do a whole lot more with it other than stand and look at the view. (I think there's a restaurant in there now but I imagine the seating is a little odd.)

Anyway, after many court battles (read the Wiki link; I don't feel like going into it), here's what stands there now. 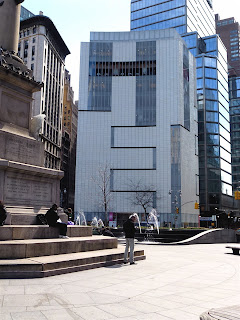 The renovated building houses The Museum of Art & Design.  The interior dimensions can't have changed, so I'm guessing it's still filled with long narrow rooms.  And it looks like it has more windows than it used to.  I'm assuming there are galleries where there aren't windows, so they're not needed.

Beyond that, I can't decide if I like this better or or if I prefer the old building.  As far as I'm concerned, they're both decidedly odd, but I can't really settle on a preference.

I will say, if I had had any say, I'd have torn down the old building and started from scratch.  There wouldn't have been a whole lot you could do about changing the footprint of the building -- it stands on an odd lot -- but I think it would have been an opportunity to put up something with a two-three story atrium at the bottom. I'd have made it feel like a little extension of the park; only glassed in.  The more you'd have been able to see all the way through the ground floors from any angle, the better it would have been.

That's my humble opinion.  Care to share yours?
Posted by Nathan at 8:12 PM

From the pictures I do like the old building - has some fun designs to it but I can see where it would also be a pain. They should have torn it down, though, and started over. That new exterior is hideous (don't tell the architect)