Pym: I'm Not Entirely Sure How To Describe It, But I'm Enjoying The Hell Out Of It! 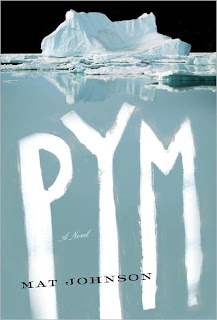 I'm in the middle of reading Pym, by Mat Johnson.

The book starts with Chris Jaynes being denied tenure by the college where he's supposed to be teaching American Literature with an emphasis on African-American Literature.  He teaches Edgar Alan Poe instead.  He's supposed to serve on the school's Diversity Committee, but as the only non-white on the faculty, he refuses to sit and discuss diversity with himself.

He discovers an antique manuscript that seems to indicate that Poe's only novel, "The Narrative of Arthur Gordon Pym of Nantucket" is, in fact, based in reality.  He assembles an all black crew of 6 to head to the Antarctic in search of both evidence and commerce.  What he discovers a land of ice with an incredible "snow honky" problem.

I've never read the Poe book (and I'm not especially tempted), but Johnson's extended dissection of it is worth the price of the book itself.  The book reads like a professorial Chris Rock performance.  The wit and the satire are all there...just with nicer language; most of the fucking time!

You know how Mel Brooks is allowed to mercilessly mock both Jews and anybody who has it in for Jews?  And you're allowed to laugh about all of it?  Johnson is as relentless in skewering black stereotypes; one minute describing how ridiculous they are -- the next demonstrating how real they are.

Update: So, I finished the book a couple of days ago and I don't think I'm as thrilled with it as I was when I first wrote this.  I'm not sure what the cause is, but the book took a distinct turn in a direction that just didn't work for me. It could be that the author was sticking to the structure of the Poe book, which is described as having either nor real finish, or, at least, an unsatisfying finish.  It could also be that the author put the book down for some period of time, (this is alluded to in the acknowledgments), and then had a very different mindset when he picked it up again.

Either way, I honestly didn't like where it went.  More importantly, I didn't like how it got there.  I won't go into detail, but the book went from really witty satire to, what I thought was an unnecessarily ugly denouement.  The word "unnecessarily", may not be fair here.  Clearly the author thought it was the appropriate way to go; but I felt as if I had been mislead about what kind of book I was reading.