What's That Stuff On The Ground?

Yesterday, Jeremiah's Vanishing New York had a post that brought back some memories for me. Now I could have just posted a comment over there, but 1), I thought it might be a little too long and 2),  why give up good blog fodder when someone suggests it.  Thanks Jeremiah!

You should go read the post, 'cause it's good, but it's mostly about The Triangle Building and how the Meat Packing District has changed over the last 25 years or so. 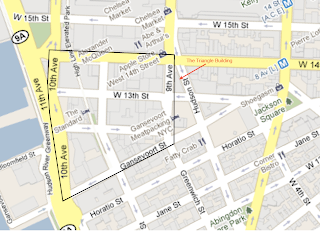 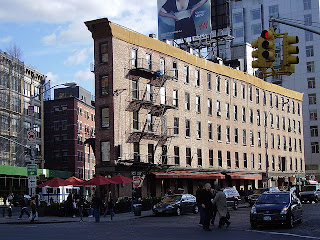 The pointy part of the Triangle Building
I've scouted in The Triangle Building a few times and I've got to say it's one of the friendliest buildings in New York.  Whenever I've gone in there, I've ended up chatting endlessly with whoever let me in in the first place and, without fail, they've ended up introducing me to one of their neighbors who's space sounded more like what I was looking for.

But that's not what this is about.

If you read Jeremiah's post you'll come across Ivy's description of what the neighborhood used to smell like.  Up until the early 90's, practically every building in the area housed a meat packer.  Their main hours of operation were from 3:00am to 3:00pm every day.  Each operation had a metal awning outside and a system of hooks on overhead rails to move sides of beef, pigs, and lambs from trucks to the inside.  Thousands of carcasses were delivered, butchered and then shipped back out every day.  And, at the end of the day, each business would leave these huge red barrels outside labeled "inedible".  That was the fat and bones and gristle that would get picked up and disposed of in various ways.

To say the neighborhood stunk would be the height of understatement.  Especially in the summer.  Sure, they'd hose down the sidewalk every day and the Dept. of Sanitation sent street sweepers through every evening, but those streets were and still are all cobblestones.  It wasn't so much that the streets were being cleaned as the stuff on them was being blended.  No matter when you walked through there, the streets were coated in a sort of slippery slime.

And, of course, the neighborhood looked gritty as hell, so lots of movies wanted to shoot scenes there.  One of my first jobs as an Assistant Location Manager was on State of Grace.  I got thrown into the deep end and assigned what would be the first day of filming.  We'd be shooting on 13th Street and it was a scene where somebody drives up, talks to someone and then shoots them and drives off. (You'll pardon me, but I honestly don't remember who it was shooting who in that scene.  If you've seen the movie, there's a hell of a lot of "driving up, talking to someone and then shooting them".)

Anyway, I was told to go to the location one evening to wait for all the "powers-that-be" to show up for the Tech Scout so I'd know what I needed to set up for the scene.  Of course, I showed up early and of course, the scout showed up late.  So, I spent about 2 hours kibbitzing with the tranny hookers while I was waiting. At first, they were pissed about the idea of a movie spoiling their business for one night, but when I told them we'd be wrapped by sunset, they were all cool with it and just wanted to know who was in the movie. (And I'll admit to having felt a little like Arlo Guthrie sitting on the "Group W Bench" after he got over being scared of all the "mother rapers and father rapers" and got around to the serious business of smoking lots of cigarettes and playing with the pencils and papers and stuff.)

There are two things I remember most about the shoot day.  First, this was back in the days when a producer could sign a "chit" and Accounting would accept pretty much any reason for you blowing through a load of cash.  On that day, I handed out something like $800 in Twenty-Dollar Bills to truck drivers who wanted to make deliveries on the block we were shooting with the request, "Why don't you go get lunch for an hour or so?"  The other thing I remember -- and this will be important later -- is that at the end of the day, all of the electricians were whining about all of the nasty stuff that was on all of their cables.  They made lots of noise about how nasty it was, but they picked it all up just the same. The electric truck smelled like spoiled rotted meat for the rest of the show.

On another show, Roger Dodger, there's a scene where Roger takes his nephew Nick to a "happy endings" massage parlor.  You'd be surprised how hard it is to find one of those places that'll actually let you shut them down for a day.  The solution was a club called Hellfire -- in the basement of the Triangle Building.  This was a place that changed it's name and clientele every night -- It was also Manhole.  One night it was a basic gay bar; another, an S&M club, etc. etc.  I distinctly recall a sign as you walked in with a list of rules -- what you could and couldn't stick in where -- stuff like that.  It was a fairly huge club and one section of it was devoted to little privacy booths on a central hallway -- exactly what we were looking for.

Remember that thing Ivy mentioned about the floors feeling like they were coated in glue?  Yup.  This was another place where they didn't clean the floor so much as just dilute it and move stuff around.  During the scout, the electricians were extremely concerned with what would happen to the cables when they touched that floor.  There were suggestions that we shoot there and then just leave all of the equipment and get new stuff from the rental house.  Ultimately, production bought all of them work gloves (and latex liners) they could throw away at the end of the day.  I also have a vague recollection of them hiring an additional guy the next day who spent the day on the truck wiping down all of the cable with Lysol or some such.

The neighborhood has changed.  Most of the meat packers have moved to the Bronx.  I think there are 4 or 5 of them still in operation there.  There are two luxury hotels in the neighborhood -- The Gansevoort and The Standard.  There's an Apple Store.  There are tons of chic little (and not so little), designers' stores.  With the exception of Hector's Diner, there aren't many places to eat that won't set you back $75 a head.  As you walk down the street, you'll hear more British and French accents than New Yorkese.  And you'll hear lots of New Joisey too. 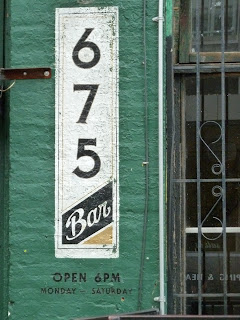 As long as we're on the subject...here's one other thing.  For years, Bill Gottlieb was buying up buildings in the area.  I assume he was getting them dirt cheap.  For the longest time, if you were looking for an interior to shoot in the neighborhood, you just sort of assumed that Bill owned it.  Invariably, they were in shit condition and he'd charge you a fortune to shoot in one of them.  I can't really blame the guy.  He knew before anyone else what would eventually happen to the neighborhood and he spent 20+ years buying up whatever he could get his hands on and then just sitting on it until the prices skyrocketed.  He died a few years ago, but his sons inherited the business. I don't know if they just sold off all of the properties and took the profit or if they still own them and they're getting super rents.  Either way, they made out quite nicely for themselves.

BTW,  I get nostalgic about places like the Meat Packing District changing but I'm not exactly going to go into mourning about it.  Sure, there are places that need to be preserved and protected, but not everything.  I'm not wild about what Times Square has become, but I can't honestly say I miss the sleazy shithole it was when I first moved here.
Posted by Nathan at 10:35 PM

Speaking as an electrician, it doesn't matter how many gloves production buys you (which goes especially for me since they're always too big for me anyway) we're still going to complain about it. Some things are just too gross.

It also goes to show that you should always wear gloves when handling cable... Because you never know where it's been.

I've been on jobs where nobody but me seemed to care that the cable was all strung out in random livestock droppings. Then again, I was thinking about the following day's location...a 100 year-old mansion with the original carpeting.

Truth be told, I lucked out in that instance. We had shot at that location for so long in sub-zero temps that the cable all froze to the ground and we had to get an entirely new cable package.

Then it was the rental house's problem.

I'd say it's more of a problem for the unlucky few who had to wrap that stuff before it could even be returned.

But better in cold weather than warm, I suppose. :)