One of the older  landmarks from early Manhattan is Trinity Church and the attached cemetery down on Broadway at the foot of Wall Street. It dates back to 1696.  Some time in the early 1800's New York City decided there shouldn't be any more burials in Manhattan south of Canal Street, so Trinity Church bought a parcel of land at what was then, the north end of Greenwich Village; on Hudson Street between Clarkson and Leroy Streets. (The spot now labeled James J. Walker Park). 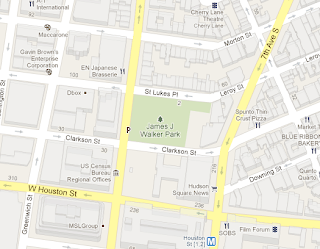 On that spot, they established the St. John's Burying Ground.  Here's a shot from the NY Public Library's archives showing the cemetery while it was fully established. (Note the large monument on the right side of the frame; it's where we'll be going.) 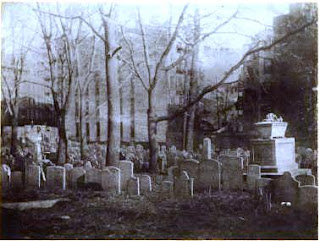 As the 19th Century went on, that block of Leroy Street became fashionable and wealthy residents built townhouses there and changed the name of the block to St. Luke's Place.  Ultimately, they decided it would be much more pleasant to live across the street from a park instead of a cemetery. By this time, it's estimated that there were approximately 10,000 people buried there (although only about 1000 had gravestones).  In 1896, the city took over the property under Eminent Domain and gave the church two years to move all of the bodies to their new cemetery at 155th Street and Broadway.

As far as I can determine, the church took the attitude that the city had unfairly appropriated their land and now all of the bodies were their problem.  Roughly 250 families paid to have their loved ones moved uptown and the rest were, apparently plowed under.

The new park was designed by the firm of Carrere and Hastings, later famous for designing the main branch of the New York Public Library that stands at 42nd Street and Fifth Avenue.  The park they designed, St. James Park was a Victorian garden with lush landscaping, a lagoon, a gazebo and a sunken garden.  The only evidence of it having been a cemetery was that they retained (albeit in a different location), the monument I mentioned from the above photo.

For some reason, after only seven years, it was decided that the neighborhood needed a playground instead of a Victorian garden and the park was changed again.  The next time anyone was reminded that the playground had once been a cemetery was in 1939 during another round of renovations.  Workmen hit an underground vault and unearthed a small casket.  The casket had been designed to mimic an Egyptian sarcophagus and had a silver plaque identifying its occupant as Mary Tisdall, aged 6 years and 8 months.  She had died on April 14, 1850.  According to The New York World-Telegram "The girl's cast iron casket...had a glass window in the top.  Her white silk dress still looked fresh and dainty.  After 89 years you could still see that she'd been a pretty yellow haired child."

The park has been renovated a number of times since then and renamed for former mayor (and St. Luke's Place resident), James J. Walker.  Here's a bit of what it looks like now, viewed from Hudson Street. (Yeah, I just did a screengrab from GoogleStreet.)

And that monument I referred to a couple of times?  It now sits on the north side of the park near the entrance on Leroy Street. 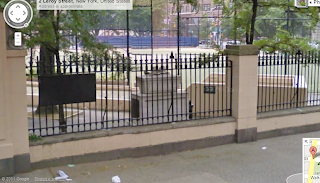 I'm guessing they saved it because it was attractive (and the largest monument in the cemetery) as opposed to any real sense of reverence.  Based on the fact that most of the bodies were never moved from where they were originally interred, it's doubtful they bothered to move the bodies associated with this monument when they relocated it.

Here's the monument as it looks today. 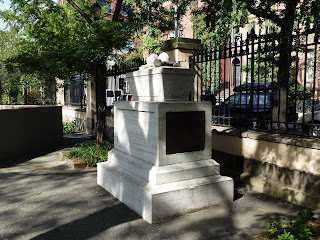 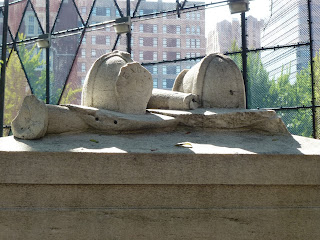 Those are a couple of firemen's helmets and a hose-nozzle on the top. 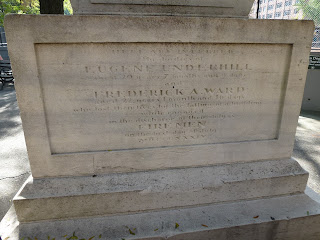 The north side of the marker is engraved:


Here are interred the bodies of Eugene Underhill aged 20 years 7 months and 9 days and Frederick A. Ward aged 22 years 1 month and 16 days who lost their lives by the falling of a building while engaged in the discharge of their duty as Firemen on the first day of July MDCCCXXXIV (1834) 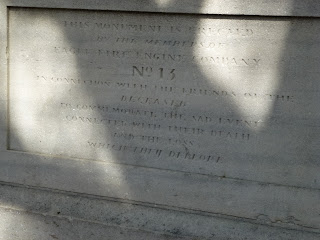 The south side reads: 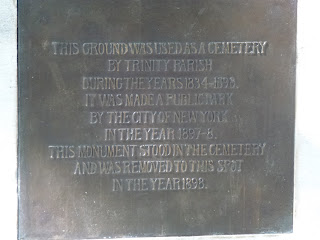 This bronze plaque is on the east side of the marker, the only nod toward the fact that a few thousand people are still buried under the ball fields and swing sets. 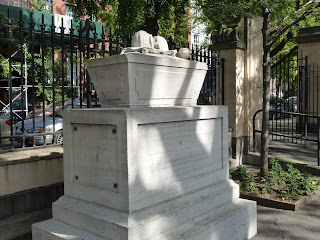 It looks like there was another plaque on the west side of the monument at one time, but that one is missing.

I hope Eugene and Frederick and all of their neighbors are sports fans.
Posted by Nathan at 9:16 AM

I was moved by this article. So much of the city gets destroyed or becomes entombed under the excruciating inertia of progress. I am glad that you took the time to tell this particular story, albiet one of no less than a multitude of others. Thank you.

Glad you liked it. Thanks.