This Is A Thing? Yes, This Is Definitely A Thing!

Quite some time ago, I was a little surprised when every media outlet in the universe went batshit over the fact that Michelle Obama had appeared in public wearing shorts. Shocking! Shocking, I said. (Actually, I think I settled on "Meh".)

The latest thing the world is wetting its panties over is the fact that Kate Middleton has a SCAR! 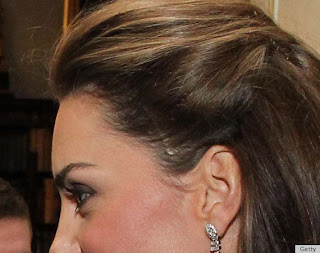 As usual, I can't be bothered to actually read all of the associated stories or do any other kind of research, but from what I have read (the headlines), I gather that this scar is the result of some "serious childhood operation" and it left a "huge" scar! (It doesn't seem all that huge in the photos, but for all I know, it snakes around for a few more feet under her hairline and then dives down her back - artfully hidden behind the shoulder straps of anything she's wearing. Who am I to debate what "huge" means?)

I think in this case, I'm going to have to agree that this may, in fact be A THING!  There are a couple of things to consider.

First of all, in some ancient cultures* prospective royalty was required to strip naked in front of their subjects-to-be and demonstrate that they were unblemished in any way.  Bodily imperfections were deemed a disqualification for Royal Succession, ("strange women lying in ponds distributing swords", notwithstanding). The British Monarchy seems to have abandoned this benchmark of perfection and, in fact, some news story I was almost paying attention to this morning did a serious expose' on all of the other Royal scars in evidence. (For a family that mostly sits around being fanned and fed grapes by liveried retainers, those guys sure manage to hurt themselves a lot. It's a good thing they seem to have bred out that nasty strain of hemophilia that dogged European Royalty for so long.)

The second and much more important consideration is this; just what produced that "huge" scar? It'd be one thing if the Palace had announced that she got it when she got clocked in the head in an unfortunate incident when a playmate hopped off of the other side of a Teeter-Totter. (It's amazing how hard it is to find a list of Britishisms for playground equipment, so I just settled on one that sounded poncy to me.)  I'd also totally be okay with an explanation that described her past involvement with a roving band of 8-year-olds beating the crap out of their rivals in the school cafeteria.  There's certainly honorable precedent for warlike Monarchs and having a nascent Valkyrie in the Royal Succession would be pretty damned cool.

But that's not what happened!  The Palace says it was a "serious childhood operation".  And I want to know what was the purpose of the operation. For all we know, they removed her little baby brain and replaced it with saved specimens from HITLER'S BRAIN!**  Do you know that Kate isn't whispering sweet nothings about Volksgemeinschaft and Lebensraum in William's ear every night? This could be evidence of a long ranging plan to reassert Empire and British WORLD DOMINATION! I don't know about you but I've never trusted that queen they've got.

Or it could be a harbinger of an ALIEN INVASION! Those movies you've seen may just be part of a conspiracy to make you believe that aliens implant themselves in peoples' torsos and then come bursting out of their chests all gory and drooly and covered in stuff that looks like milk that's three days past its expiration date!  Maybe the aliens don't need to pop out once they're implanted in a nice cozy human brain. And then, you get one of them married into the Royal Family and - BLAMMO! - no need for any of that silly "Take me to your leader" nonsense.***

I'm not saying this has to be an evil plot for world domination (although that's the most likely situation).  It's also possible that Rupert Murdoch was just planning ahead (or a head - get it?), and had Kate implanted with a camera and recording device years ago! Keep your eyes peeled for News Corp coming up with completely unexplainable inside scoops.  Paying off butlers and hacking cell phones is so 2010!

The fact is, there are all sorts of explanations for what that "serious childhood operation" was all about.  And most of them are NOT GOOD.

I think this bears some protracted, irrational, paranoid vigilance.

**How, you might ask would the British have gotten their hands on Hitler's brain samples? Well, everyone knows that the Russians got to Berlin first at the end of WWII.  And everyone knows they covered up the real story behind Hitler's demise. And everyone knows the KGB kept Hitler's Brain in a jar for decades. So anyway, 1989 and Glasnost rolls around and little Kate would have been just 7 years old. And the Queen could easily have challenged Gorbachev to prove how much the Soviets were changing by getting him to hand over some HitlerBrainChunks™to be installed in a future bride for her Grandson.  Those Royals have a long history of betrothing infants to each other.  Maybe the Queen had HitlerBrainChunk™ surgery performed on thousands of little prospective future brides.  It's not so far-fetched. You do the math!

***I don't know if the Queen is involved in this scenario or not,  but it wouldn't surprise me one little bit.
Posted by Nathan at 11:08 AM

Hmmmmm. Have you given any thought to running for Republican Presidential nomination? You appear to have all the skills necessary, and your version of reality is more fun and more interesting than any I've heard from the declared candidates.

That's a big scar? That's nothing!

Dang, I have scars all over, and my lower face is nothing but scar tissue after a bicycle accident where I tried to peel it off. Maybe my jaw got replaced with a T-Rex jaw. That could explain why I like to bite things. CHOMP CHOMP CHOMP.

Thanks for the morning laugh.

How can you be so cruel?!? The only logical explantation is that she was born with a face that kind of looked melted on the left side. It probably hung down a few inches and sagged and swayed and flapped in the breeze.

Her left eyelid was somewhere in the middle of her cheek, so blindness in one eye would have been a horrific trauma for the poor, poor disfigured young girl.

The left side of her mouth would have probably rested on her clavicle somewhere, so I'm sure she was teased mercilessly by her schoolmates as she ate in the school cafeteria, stuffing spoonfuls of kidney pie into the top of her shirt.

The scar is from the facelift that saved her from a life of misery and taunting. And you! You find humor in the poor thing's misfortune.

I don't even see this scar. Is in in her hair? I met her a few months ago and didn't notice it. THE WOOL HAS BEEN PULLED OVER OUR EYES LONG ENOUGH.

Clearly I have not been keeping up with the right kind of news.

If I'm right and she's been co-opted by aliens who's to say she isn't still stuffing spoonfuls of kidney pie into the top of her shirt? I've never watched her "eat"; have you?

I hope you realize that as a Canadian that the Queen you are talking about in the footnotes is my Queen. I just want to congratulate you into your keen insight into her personality.

Why is the lady in the lake with the sword lying? Is she trying to decive the world about something?

I don't actually doubt the lady in the lake's veracity (or even sincerity). I just agree that a watery tart handing out cutlery is a lousy way to go about choosing a government.