Apparently, half of the country is FREAKING OUT because the First Family went to the Grand Canyon over the weekend (where it was something like 7000º) and Michelle Obama WORE A PAIR OF SHORTS! How dare she?!?!!!?!!!? Doesn't she know First Ladies DON'T HAVE LEGS? And a lot of the reports refer to them as short shorts. Frankly, I just don't see it. I know that whatever a First Lady wears is supposed to be newsworthy but there are really people who think she's not ever allowed to show her knees? Gimme a break.

Apparently, the last First Lady to show up in public wearing shorts was Jackie Kennedy. Here she is with the family at Hyannis Port. Yeah, sure! I know this doesn't really count as showing up in public. This was private time with just the family and the White House photographer and the other photographer from LIFE MAGAZINE. Yeah, this was a captured private moment. Totally different. 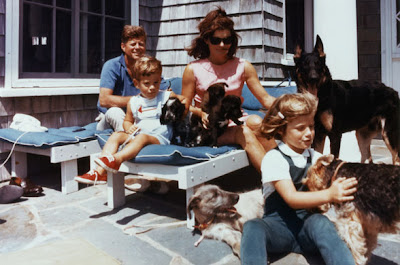 The thing is, I wouldn't begrudge any First Lady the right to dress comfortably in the right surroundings. It makes them look normal. 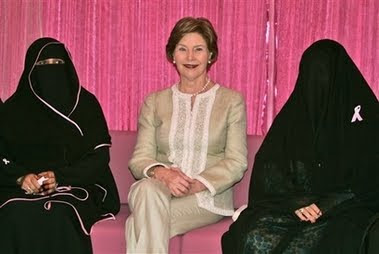 But what about here? Would America have FREAKED OUT if Laura had gone white-water rafting in a pair of damn shorts? (Note: The water here looks like it's got delusions of grandeur just trying to qualify as a Class One rapid, but still...in a boat?...go ahead and feel free to show your legs!) 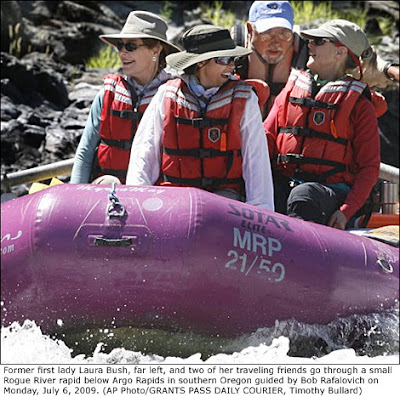 Hillary doesn't count in this discussion. She's been officially running for President since Fifth Grade, and she's convinced that there's a different set of rules governing what qualifies as presidential vs. what's First-Ladyish (lady-al?)...whatever. If she ever does get elected President, she'll be sunbathing topless in a thong on the roof of the White House every weekend (with the aircraft restriction expanded to 500 miles), and the Secret Service will be recruiting blind eunuchs. 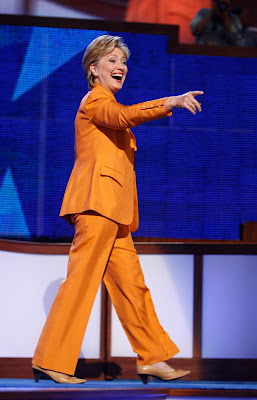 George the First and Barbara used to go to Kennebunkport all the time. I sure as hell wouldn't have begrudged her lounging around in a pair of shorts. My grandmother always wore shorts when we went to the beach and I'm not aware of having been scarred by the experience.

And really, if Barbara had been wearing shorts in this next shot, could you honestly say that would have been the most disturbing thing about the picture? 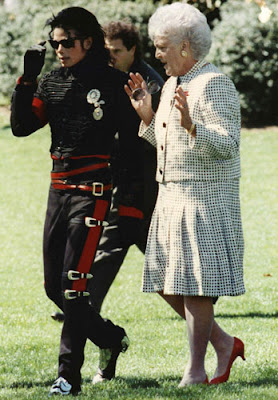 I'd have even cut Nancy Reagan some slack on the issue. Other than that unfortunate tumor growing on her ass, she appears to have had totally respectable legs. 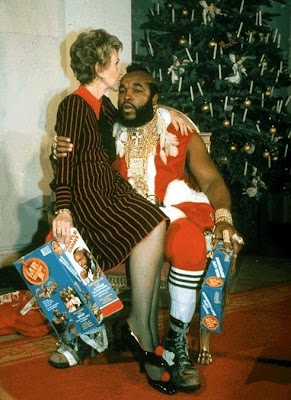 I am, however, only willing to go so far with my equanimity. I'm thankful that there aren't any shots of Bess Truman or Mamie Eisenhower in shorts. I don't think even Abe saw Mary-Todd out of her full length black dress. 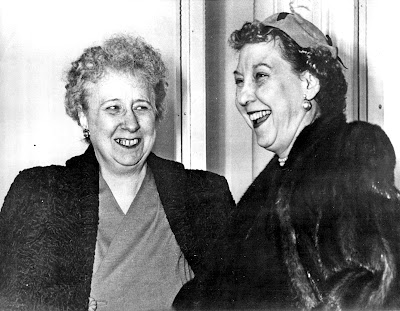 Our civilization is SO DOOMED.

May I take this time to point out, OMG Michelle Obama is HAWT!

Thank you, please continue with your day.

First the bare arms controversy, and now bare legs. People with way too much pet energy.

Oh, and that's for that vision of Hillary as President. Fortunately I'm going to Sam's Club after work and can restock on the big box of mental floss.

Those aren't short shorts. They are normal-sized shorts. I have a pair just like that.

One wonders how many of the critics are the same ones who voted for George W. Bush because he seemed like a "normal guy" and "someone you could have a beer with." Because, you know, real-live ordinary guys' wives all wear formalwear and dress suits all the time, it's part of ordinary-guyness. One pictures the Bushes showing up at a neighborhood BBQ in Dallas and the former First Lady joining the backyard volleyball game wearing an expensive pantsuit and heels. That's what people wear to backyard BBQs, after all.

Hey, sometimes you can't win for losing--the Obamas act normal, it's undignified, they act Presidential and it's hoity-toity.

And, also, I'm a little disturbed by the fact that I have to agree with Nathan about Nancy Reagan. Nice gams. Attached to Mrs. Reagan. ::shudder::

Please see this morning's post for some updatery on the subject. And lest you forget, Nancy was a Hellcat of the Navy in 1957. (I have no idea what the significance of that is, but I just felt like typing "Hellcat" this morning.)

Simpley the price one pays under the microscope that comes with being Mrs. POTUS. Personally, they need to leave Michelle alone, they're just jealous.

My legs & upper arms certainly don't look that good, but learned may years ago that there are times when my comfort trumps looks. That Mrs. O can pull off the look and do it stylishly, more power to her!