Have You Seen This House? 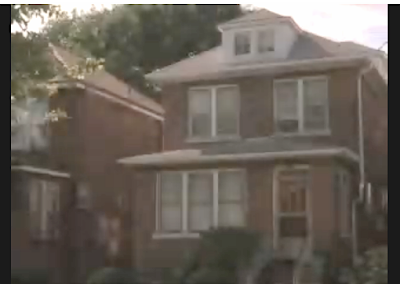 Movies make a lot of people obsessive. Some will debate the merits of a movie vs. the book it was adapted from. Some will stand for hours behind a barricade hoping to get a crappy photo of a star or...swoon, an actual autograph. Some sit in front of their DVD players watching movies frame by frame so they can catch mistakes and be the first to post about them on IMDB.

And then there are the people like visiting the locations that show up in movies. That's fine. The store where Madonna bought a jacket in Desperately Seeking Susan did a bang up business for years from that scene. You can go on a Kenny "The Real" Kramer Tour and spend 3 hours visiting sites from The Seinfeld Show. I can't tell you how many times someone has asked me where they'll find Central Perk, the coffee shop on Friends. (Take the Lincoln Tunnel to New Jersey and continue about 3000 miles west. You'll find it on a studio backlot, but it probably looks like a 1920's era Communist bookstore or a newsstand right now. Just sayin'.) The point is that these peoples' existence can increase a location's cache or at worst, it's almost always harmless. (Sex and the City fans are an entirely different species and shouldn't be let out without restraints and muzzles.)


Which brings us to today's topic. A friend of mine forwarded me a copy of an email correspondence he's been having with a fan in Connecticut. It seems that this guy, (we'll call him Mr. X), has been going crazy trying to find out where the house is located that was used for the exterior shots of the Heffernans' house on King of Queens (that shot at the top of the post). Since the show was shot almost entirely in a studio, all establishing shots were what we call "Dallas" shots. (Camera slowly tilts up massive impressive office building. CUT TO: Interior palatial "rich guy's" office -- in the studio.) Typically, the producers will call someone in NY (or Dallas or Cleveland or wherever) and hire them to put together a minimal camera crew, find some exteriors that work for the show, and shoot them. Then those shots get recycled over and over and over again for as long as the series runs. The people who shot them get paid for the few days it took to get them and promptly forget they were ever involved.

And it's not the type of thing that shows up in the credits. IMDB doesn't have a listing for the guy who found a great view of 42nd Street for Episode 3, Season 4. (And I bet you thought even the guy who pumps out the port-o-potties got a credit.) Mr. X had run into a brick wall and was at a loss on how to get the answer he was looking for. (Please note that I'm not slamming this guy in the least. He did a little bit of normal, every-day type of searching and suddenly, getting the answer to his question had taken on a life of it's own; the answer was no longer the most important thing -- but finding the answer had become like a schoolyard dare. I've been there.)

So, putting the story in order, it seems Mr. X found an email address for King of Queens' Production Designer and asked him if he knew where the house was. The Designer responded that “the shot of the Heffernan’s house was a stock shot that was in the Studio's library. It had been taken for a movie a few years earlier. There was no information on the shot as to the location. We will probably never know the exact location. Over the nine-year run,(of the show) no one ever contacted us that it was their house.”

Mr. X wrote back to ask if the Designer knew which movie the original shot had been done for and was told that the library just lists things like "red brick house" and some Post-Production Supervisor had chosen it years ago. There just wasn't any way of finding out the shot's history. Mr. X was not to be deterred.

The Studios' libraries are accessible online (with watermarks over the shots) to encourage people to look through them and buy stock footage for their projects. Mr. X went surfing. He found a variety of shots of the house he was looking for, but no further information. He was still at a dead end as far as getting any information about the house went. He decided to leave a note on the site's message board. That same day, he gets a phone call from the Studio's VP of Media Productions!

He was told that the footage had been filmed for something else years before King of Queens came on the air and that by the time it was used, nobody had any idea where the house was.
Studio VP said the house was in NY (he was wrong!) but that nobody seemed to know where. They thought for sure at some point the owner or a neighbor or somebody who recognized the house would contact them, but nope. Studio VP left his number with Mr. X and asked him to call if he was able to piece together any information. Apparently, this has been a mystery to the Studio folks for years and they were dying to know the answer too!

After much digging, Mr. X was able to discover that the shot had originally been done for a TV series called Sibs in 1991. So he decided to watch all of the stock footage in the library associated with Sibs, hoping a clue would drop. And sure enough, it did. At the head of one shot before the camera tilts up a "nondescript gray building", there's a slate in the shot for a second or two. And on that slate, were two names.

So Mr. X has a new clue and starts an internet search for those names...one of whom is a friend of mine here in NY. In 1991, my friend was just transitioning from being a Location Manager to being a Producer and those gigs getting establishing shots of the city were his bread and butter to begin with. He's pretty easy to find online. So Mr. X emails him asking him if he's that guy who shot the house in Queens for Sibs that became the Heffernan's House on King of Queens.

Now, as I mentioned, these jobs are pretty forgettable. The only reason my friend remembered at all is that A) he remembered having to hire a Korean Translator to make sure the homeowner really knew what the hell he was talking about because the homeowner didn't speak a word of English, and B), he'd gotten a good laugh the one time he had ever watched King of Queens and noticed the house in the shot. (He was only sure it was the house he had shot because he could see his 1990 1982 Honda drive by in the shot with a PA he'd hired driving it!)

So after a bit more emailing back and forth, my friend finds the original Location Agreement in his records and let's Mr. X know the address of the house (in New Jersey, not Queens).

And everybody is happy...but there's more!

It turns out that this job was done in the days before my friend had incorporated so all of the paperwork is in his name. And since there's no record of of a transfer of rights and ownership, all of that stock footage is actually owned by my friend -- not the Studio. I wonder what the back-licensing fee is for 9 years worth of using a stock shot and then putting it into syndication. Hmmmm!

Oh, and one more thing. The other location that has defied Mr. X in identification is a mansion in a scene at the end of National Treasure. The scene is the one where Justin Bartha is complaining about Nicholas Cage not accepting the government's 10% finder's fee before driving away in his new Ferrari. Mr. X has talked to a number of people who worked on the movie, but depending on the source, the mansion is variously in New York, Washington D.C. or London.

If anyone knows the answer, I'll be happy to pass it along.
Posted by Nathan at 10:10 PM

For some reason the mansion at the end of National Treasure reminded me of a place that was used in the Highlander TV series. Think in the series the mansion was supposed to be in Europe, maybe France or England.

Never gave it another thought, just knew I had seen it at some point in the past.

I had lunch in the Roslyn Cafe of Northern Exposure fame. Dumpy little town, but still cool. The best part was the crew's graffiti in the men's room. It's an experience to see Nietzsche, Hegel, Plato, Hawking, Feynman as fodder for bathroom scrawl.