Most older cities in America, especially on the East Coast, have carriage houses leftover from the days of...well, carriages. Brooklyn, which I'll remind you was a city unto itself until consolidation with NYC in 1898 quintupled in population between 1840 and 1870 (1870 pop. approx 280,000). Two of the most fashionable sections were Brooklyn Heights and Clinton Hill with their close proximity to Manhattan. The first of the bridges, the Brooklyn Bridge, was completed in 1883, but until then there had been regular ferry service.

If you walk through these neighborhoods, you'll find old mansions, most dating from the mid 1800's into the early 20th Century. And where you had mansions, you'll also find carriage houses. It's actually a little rare to find a carriage house on the same piece of property where the mansion stands, I suppose because space may have been at a premium even 150 years ago. I also suspect that those who could afford the mansions preferred to have their carriages, horses, and the men who worked them stashed away out of sight (and out of olfactory notice).

Nevertheless, there must have been some element of keeping up with the Jonses because some of the remaining carriage houses are absolutely beautiful and you can tell they weren't built on the cheap. (Note: I suspect that the grander ones are the ones that still exist because they were so nice. Some independent carter with his wagon and un-matched nags probably would have had some wood-frame shack of a garage that nobody would have thought twice about tearing down when the city was expanding. I also suspect -- I'm doing an awful lot of suspecting here, aren't I -- that the wealthy would have continued to use their carriage houses even after replacing the carriages with an automobile and chauffeur.)

So, let's have a tour of just a few Brooklyn Carriage Houses. First, let's look at Grace Court Alley, a small street that seems to have been dedicated to Carriage Houses. It's one block from the Brooklyn Heights Promenade, near some of the Heights' grandest houses with the grandest views and it's downwind of the prevailing breezes off the river.

Here are some of the houses at the corner of Grace Ct. Alley and Hicks Street. Note the hoist thingy sticking out above the garage doors where, presumably there was once a hayloft. (If anyone knows the proper name for the "hoist thingy" I'd love to hear it. It's not a davit, since that's nautical and it's not a gantry since it's fixed in place as opposed to movable on rails).

I'm not sure, but I think these first four carriage houses were actually one really grand carriage house for a really wealthy family. The three peaked roof sections seem to house two separate garage bays (with space for a hayloft above) and the central section seems to have always been dedicated as living space. The only reason I think the one on the corner is part of the original is the matching stonework around the windows. I could be completely wrong here, but they're 3 separate houses now. The entrance to the one on the corner is on the main street around the corner. 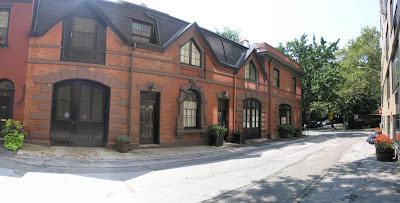 Here are some more of them at the end of the Alley.

And another one. I'd love to get a look inside this one. 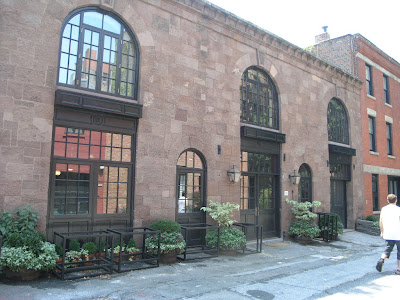 And anchoring the end of the alley is this shack. Pity the people who have to live in that. 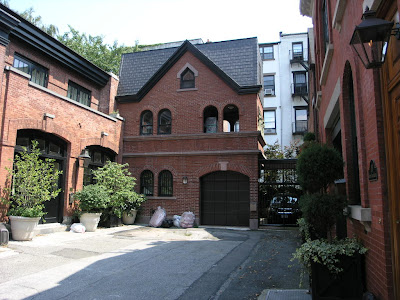 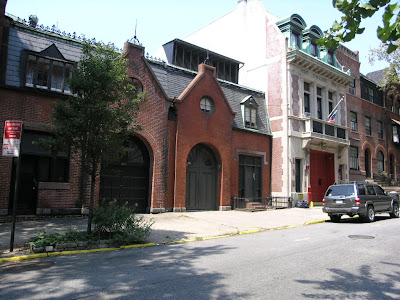 These are a little further down the same block. 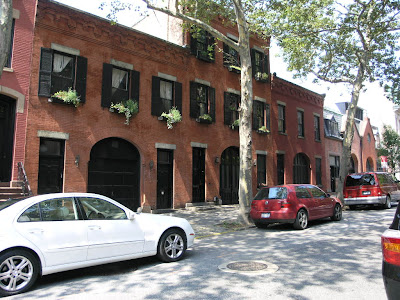 And these are across the street. 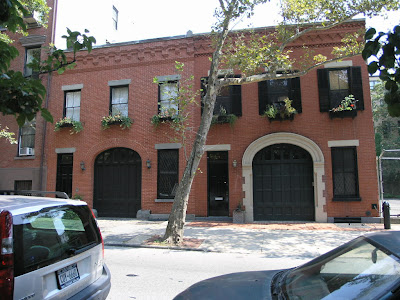 I'd imagine a bunch of you live places with renovated carriage houses as part of the landscape and I'd love to see pictures if you want to link them. I'd be interested to see what kind of variety there is out there.
Posted by Nathan at 2:44 PM

I've been to Brooklyn Heights on foot countless times, but I don't think I've ever stepped into this particular corner. Something to keep in mind for the next time I'm in the area. Thanks, Nathan!

I grew up in a building across from a fire station, and it wasn't a carriage house. My father used the daily 7am siren test as his alarm clock.

There are carriage houses around here. I'll see if I can go phototouring once I'm unemployed...

It is very interesting for me to read this post. Thank author for it. I like such themes and anything connected to them. I would like to read more on that blog soon.

It was certainly interesting for me to read that post. Thanks for it. I like such themes and everything connected to them. I definitely want to read a bit more soon.

Those carriage houses on Hicks Street are actually much "grander" than the ones on Grace Court Alley because they are much bigger inside. You can't tell from the outside, but they are built very deep on the lot. Most of them extend 75 feet, which makes a very grand interior space with high ceilings. I've been inside one of those carriage houses and can say that they are quite impressive on the inside. And they're charming on the outside! Perfect combo.