Dinner with the Sekret Scientist (or, When Will I Ever Learn?)

So, not only did I have lunch on Wednesday with Ilya, on Thursday, I met John the Scientist for dinner. Ultimately, we had a really good time and some really good food, but meeting up proved to be a dangerous proposition. John and I had been trading emails, the gist of which was that he'd be getting out of work around 4:45 p.m. and he'd be on the east side near 14th Street. That sounded fine and I mentioned that it would be a whole lot more convenient for me to meet him there than near the hotel where he was staying.

On the appointed afternoon, I tried calling the cell number I have for him and the call went directly to a robot-woman telling me that the "customer I was calling had not yet set up voicemail to receive messages". Fine. I sent an email (which I figured he'd get on whatever phone he was carrying), telling him what time I'd be heading into the city and that he should call my cell when he got out so we could meet up.

I got off the train at about 4:30 and made my way to a nearby park where I could comfortably sit and read my book while waiting for him. (The Chronicles of Narnia if you must know -- which I've oddly made it to this point in life without ever having read before.) All was good.

Now some of you live in the middle of nowhere and apparently, you have to concern yourselves with bears and moose and rabid coyotes and killer bees and a bunch of other shit I don't have to think about on a regular basis. That's one of the reasons I live in a city. If I want to see nature, I'll get on the damned train or into the car and I'll go to where nature belongs. Nature is a thing to be visited. And in my preferred version of nature, the wild animals who would like nothing better than to eat me, trample me, sting me, piss on me, or just afflict me with various parasites are kept safely separated from me by things like bars, fences, pits or moats...or even better, all of the above. I'm a big fan of the Bronx Zoo, where they've created acres and acres of natural habitats and it's not uncommon to stand at the rail looking at a big giant habitat created to mimic African Savanna and be told that I'd be looking at lions or cheetahs or killer marmosets if they weren't hiding in the trees 6 miles from the railing. I can live with that. And I'm certainly not one of those douchebags who's ever likely to fall in with the polar bears because I need to lean over the rail to get a better picture. That's why zoom lenses were invented.

None of this should make you think that city life is without it's dangers. While sitting there peacefully reading my book, I began to realize I was hearing a steady scratching and chittering. I looked over the top of my book and saw this guy approaching me. 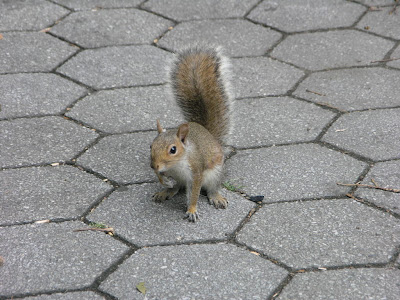 At this point, you guys are all probably thinking, "Aww! Look at that cute little guy."...to which I'd respond, "You wouldn't survive a minute in the city, you dumb country putz, you." See, your reaction is what they're going for. The cute guy is just the advance team...there to distract you while the rest of the little fuckers move in for the attack. It's a little known fact, but city squirrels are directly descended from those velociraptors you saw in Jurassic Park. They are just a multi-organism, highly efficient killing machine.

Don't believe me you silly Rural-tanians? Look here. While the first guy is being all cute and shit on the ground distracting me, this guy is quietly sneaking up. 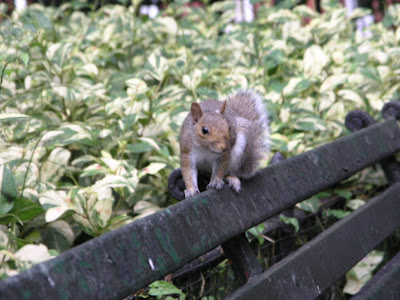 And he's got friends! Oh yes he does! 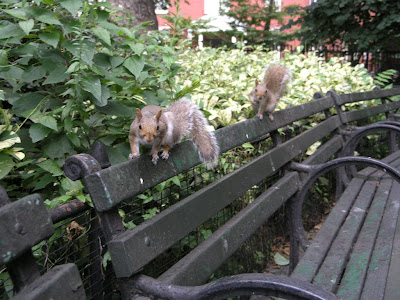 Remember that scene in Braveheart?...the one where Mel Gibson is riding quietly through the muddy little hovels with his hands in plain sight? And when he gets close enough he reaches behind his back and you find out that he used Midievel duct tape and he's got a war hammer stuck back there and he whips it out and BLAMMO!...some schmuck's head isn't attached to the rest of him so good anymore? Yeah, like that! Well look at this other little guy trying to get close to me. If you don't think there's something lethal hidden in that bushy little tail, you're out of your cotton picking mind. 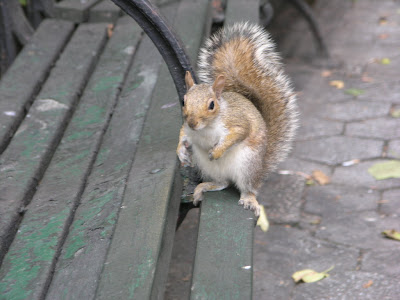 And while we're at it, here's one of those rare NYC black squirrels I've talked about before. I'm not 100% certain, but I'm pretty sure they're the squirrely version of REMF's...just more competent. They direct the battle but they never expose themselves to direct conflict. They're some of the most dangerous opponents you'll ever face. 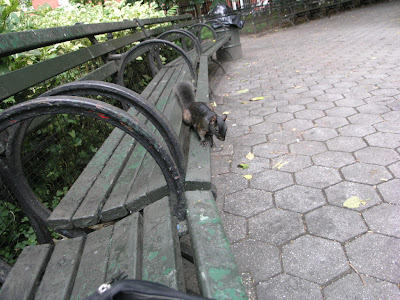 So anyway, I'm no fool and I went and found a nice safe little bar to hunker down in while waiting for the Sekret Scientist. Eventually, he called me a little before 6:00 p.m. and I remembered that he can only tell time in Greenwich Mean Time - plus or minus whatever -- and he'd forgotten to carry the "3" when calculating for Eastern Standard Time, so he was off a little. It can get a little annoying when he's being all scientific and stuff, but really... no biggy.

So we met up and decided that we were both in the mood for Sushi and until the moment we walked into the restaurant and he started babbling away in Japanese to the hostess, I had completely forgotten that he likes to order gross shit in languages I don't understand and make me eat it. I was going to make up some story about how he tried to get me to eat Tuna-Testicle Soup and how three guys came to the table with a live tuna and held it over a bowl full of some smelly broth and a fourth guy wearing scrubs took a scalpel and carefully sliced out the poor guys 'nads which splashed into the broth and we laughed and laughed and...but I'll restrain myself. 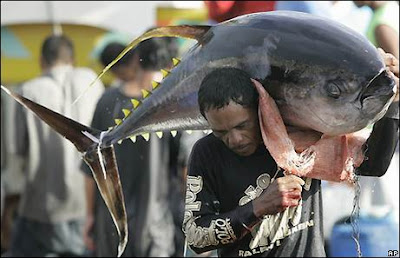 In the end, the most exotic thing we ate was a salad made with grilled eel. I like grilled eel, so this wasn't really all that adventurous on my part. I did, however, demand that we call it seasnake instead of eel. That made it sound a lot more alien. It tastes sorta like chicken.
Posted by Nathan at 9:00 AM

It's true. It's worse than you think.

I need to tell my sister to move back. Your city is just too crazy.

I've still not read Narnia, though I did see the movie and therefore consider myself sufficiently informed on that story.

Well, there are seven books total. The movies only cover the one with the wardrobe (I always want to call it "The Wind & the Lion in Winter in the Wardrobe"), and Prince Caspian. The others are pretty good too (so far).

Very funny. Left you a message in the clubhouse.

Ha! I daily defend myself from moose and bears and deer and things that would eat your wimpy hordes of city squirrels as a lazy afternoon snack. When I go to the big city I always bring a couple with me just to watch out for squirrels like those you mention.

You putz! You wimped out on me.

Next time I really will order something gross in Japanese. :p

Them squirrels, gotta keep a watch on them. But see, out here in the sticks wez also gots us some of dem hawks and eagles. They eats up all the squirrels and provide fine entertainment.

Plus, you know, squirrel stew.

Oh, and those little black fuckers, they're mean. It took at twelve of our grey squirrels to run one out of our yard.

Vince, I know I mentioned this during my little visit to your neck of the woods, but I still think you people are out of your freakin' minds. Your concept of Wildlife Management leaves much to be desired.

Like I said, as I was driving into town, a damn black bear just sauntered across the highway. I mean fine, go ahead and let them wander around willy-nilly, but you should at least have some of those yellow signs that say "Bear Crossing". How the hell else are the damned things going to know where to go. And once you get them crossing at the right places, you can put up some of those "walk/don't walk" signs too.

You guys are just plain nuts.

Those squirrels are so brazen because they're from NY. Everyone knows New Yorkers got a pair on them.

Down here by the beach we have sweet, friendly squirrels that eat quietly from the bird feeder and don't cause trouble.

Yeah, I left you a message in the clubhouse too. Bawahahahahaha.