This Is Not Appealing To Me. More TMI Just In Case You Feel Like You Missed Something Because of Today's Twitter Outage

Have you seen that commercial for Dell Laptops? You know...the one where they're singing Lollipop and they're in a candy factory and the laptops get made just like candy does? Well, it's a nice idea and it's reasonably well executed and in the end, the laptops do come out looking like tasty candy treats. But I just can't make it that far.

Even worse, it's the kind that even the most consciencious dog owner won't be able to adequately scoop off the sidewalk. Yeah, sure, I expect people to pick up after their dogs, but even I don't expect them to haul a wet/dry Vac around with them. 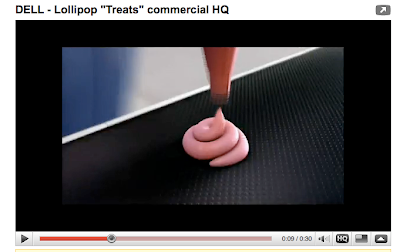 Hey Mom! Buy me one o' those dog poop candy computers, huh?
Posted by Nathan at 12:35 AM

shhhh, I'm sure that's one of those things the art director is just laughing his ass off over (there are some other subtle jokes about the computers as well in that commercial). Just like the copywriter who came up with, "You can't have just one Lays and not want more and more."

Which I've always mashed with the UPS commercial, "What can Brown 25 do for you?"

the other stuff may have been to subtle for me. Do tell.

Well, off the top of my head (without reviewing the ad), there's the point where the colored piles are whacked by rotating tennis rackets (or it's "where the shit hits the fan") And then the final scene where the thing is wrapped up, not just like candy, but like hard candy. Like Werthers Originals (or, "it's your grandpa's computer"). Also, there's the taboo that for a product people are supposed to use, the final scene is "wrapping it up" so you can't use it. It would be like having empty beer bottles in a beer commercial (that's something you just don't do). You want to show somebody using it at the end, instead the thing is hermetically sealed (I'll leave it to your imagination just what that signifies).

In fact, if memory serves, no person ever touches the computers anywhere in the commercial.

Ooo, just reviewed it, forgot the "elephant feet" squishing (and who doesn't want that), and the oven baking (while probably not intentional like the shit hitting the fans, reminds me that it was Dell computers that had the first problem with over baking and catching fire). And in every scene there is at least one person (and in many cases all people) with their hands in their pockets (also a no no for a product that is meant to be used).

So either their Art Director flunked basic visual story telling, was high, or missed symbolic story telling 101, there's someone laughing up their sleeve.