We Don't Do Important Here!

Let's start by (kinda) updating yesterday's post in which we talked about the MASSIVE CONTROVERSY surrounding the issue of Michelle Obama wearing a pair of shorts in public. This morning, The Today Show on NBC revealed the results of their (nonscientific) poll on the subject. The result is based on people voting on NBC's website, so I'd say the voting pool is limited to people who give a shit. And, I'll be honest -- you either have to really give a shit, or you must really need to find the poll so you can get a screenshot for your blog, 'cause finding this damn poll took me almost 15 minutes! So, anyway, among those searching for hours and hours to find a place to express their outrage, 83% think "it's fine" that she wore shorts and 17% thought it was "inappropriate".

Look! Here's the damned screen shot. Do I win anything for my diligence? 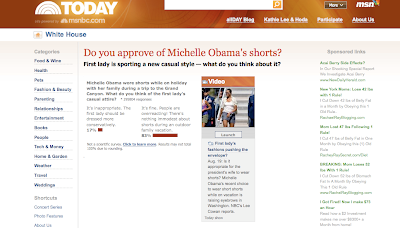 As Matt was telling us the shocking results of this poll -- "It's our biggest response EVAR! Over 300,000 people voted!" -- a thought occurred to me; all of the stories I'd seen on this started with some version or other of "Michelle Obama was seen wearing shorts while exiting Air Force One...sparking outrage in some quarters." (I'm as guilty of having reported this as anyone else, BTW.) But suddenly, I realized I couldn't, for the life of me, find out what quarters the outrage was coming from.

So I proceeded to do what passes for research these days -- I Googled the shit out of the subject. I filtered the search so that the results showed up in order of publication and tried to find the earliest stories about it. I spent an exhaustive 10 minutes looking at shit (that's 25 minutes of research if you're counting), and I'll admit, I couldn't find a single instance of anyone identifying any outraged quarters (or eighths, or sixteenths, or any other outraged fractions or factions). All I could find were bloggers and news outlets asking the question; Is it appropriate for the First Lady to bare her legs in public.

So all of this is my long-winded way of telling you that the outrage seems to have been entirely manufactured to provide content since there's no other news going on that warrants any airtime, newspaper inches or webspace. (Damn! If only there were something worth reporting? Where are all the wars, elections, corrupt politicians and instances of random violence when we need content?)

Allow me to provide a further example, if I may:

During the day, you may see 12 teases/promos breathlessly announcing: "Have microscopic aliens from a distant planet INVADED EARTH and infested 22% of Earthlings' colons? Tune in at eleven for the results of Channel 67's INVESTIGATIVE REPORT!

Then Eleven O'Clock rolls around and you tune in because THERE ARE MICROSCOPIC ALIENS INFESTING YOUR COLON! The story gets teased before every commercial break and then, finally, at 11:27 p.m., you get some frightening music and a big graphic (Maybe a silhouette of some guy with a microscope lodged in his ass?) and the screen dissolves to INVESTIGATIVE REPORTER, JOSH HOODWINK who seriously intones: "Have microscopic aliens from a distant planet INVADED EARTH and infested 22% of Earthlings' colons? Uh...not that we're aware of. We'll keep you abreast of the situation as more information comes to light.


Googling "Michelle Obama Shorts" will get you more than 2.8 million results. I apologize for being one of them.

Moving on to another subject... you may remember me blogging "...and it's not a good stigma". I thought it was a particularly "Duh" moment in reportage. Well, there's another story being reported that has a moment like that (at least for me).

As the NY Post (and others) have reported,Liskula Cohen went to court to force Google to reveal the identity (or at least the IP and email address) of an anonymous blogger who started a blog for the sole reason of calling Cohen (as publicly as possible) "a psychotic, lying, whoring ... skank", among other things. 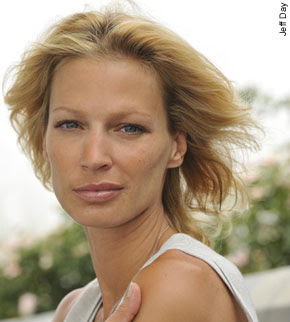 The judge agreed with Cohen and Google turned over the information yesterday. Now I'm not stupid -- I realize that the story and the case have some pretty deep ramifications and set a new (I think) precedent regarding anonymity on the internet and BLAH, BLAH BLAH, BLAH, BLAH! Those are important issues. Didn't you read today's headline -- We Don't Do Important Here!

Nah, the part of this story that caught my eye is this quote from Cohen's attorney:

"Under these circumstances, in the context of the blog at issue, the words 'skank,' 'skanky' and 'ho' carry a negative implication..." and "are actionable."

Ya'think? Thanks for the clarification. Duh!
Posted by Nathan at 9:10 AM

Nathan, I was just coming back to say I'd probably overreacted when I saw your comment that you'd updated, which led to the new post, etc. And the reason I was coming back to say I'd probably overreacted was that I just saw where Kate Harding at Salon reached exactly the same conclusion you did. Apparently the "controversy" is largely confined to NBC, The L.A. Times and maybe HuffPo. Who apparnetly feel August is a "slow news" month, notwithstanding ongoing work on healthcare reform, armed men showing up at Presidential events, an election occurring today in a country we currently occupy, a recent and devastating set of terrorist attacks killing and injuring hundreds in a country we're trying to withdraw from, etc., etc., etc.

Gee, I miss so much by not watching TV news....

And another Kate, Kate Dailey at Newsweek, not only backs you (and Ms. Harding), but is willing to bet "there's a photo of Eleanor Roosevelt in short pants somewhere in the national archive," which I point out because I suspect Mrs. Roosevelt would join Mrs. Truman and Mrs. Eisenhower on your list of First Ladies whose legs maybe should remain a mystery, a secret which humanity is better off not knowing about.

Then again, maybe she had nice legs. You never know....

Damn you to hell Newsweek and Salon! Here I am making sure I don't do important and you assholes come out and validate me!

I'm writing about the cats tomorrow!

I think that woman needs to eat a sammich. Not Michelle - the other one.

Just you wait, Nathan: National Geographic will devote their next issue to cats. They've done it before.

Oh, and the other part of the post, re: Ms. Cohen: actually, there probably is a bit of "duh" in the attorney comments, since it's not really fer sure that comments like "skank" and "ho" are actionable. They carry a negative implication, sure--but that's not the alpha and omega of defamation law: an expression of opinion (not fact), however negatively worded, may not be defamatory. Cohen will need to prove not merely that "skank" and "ho" are insulting, but that they would lead a reasonable person to believe that Cohen has loose morals or is engaged in prostitution (and that these statements are false). Unfortunately for Cohen, there's some precedent out there suggesting that terms like "skank" and "ho" are so fundamentally meaningless that they're not really defamatory (indeed, if I'm not mistaken, I believe there's a case-on-point floating around out there that specifically addresses one of those terms--I believe, though I may be misremembering, that the case is one in which a jurisdiction has ruled that "skank" is not defamatory because it's become a generic insult like "jackass").

Whether Ms. Cohen wins or not (I'm betting on not right now), the most significant result is likely to be the chilling effect the case has on anonymous speech, which might be a bad thing in spite of the fact that most anonymity is used to shield outrageous acts of asstardery.

And you don't do serious. Ha!

And I mean that!

This is the Nathan that I missed!

Wit, and wisdom, cunningly disguised as mere bloggery, specifically disclaiming to be anything close to wit or wisdom. But we know better.

Nathan scoops the newspapers, and news sites, and news magazines (and their sites), with the last word on the subject even before the others put their first words together.

And then he tops it all of with a gratuitous picture of a "lite-headed" blonde. Polybloggimous FTW!