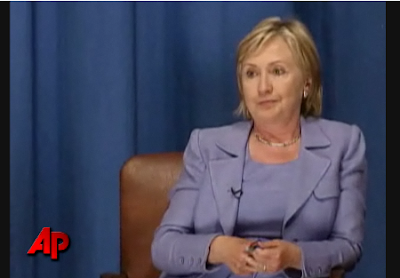 You've all, no doubt seen video of Hillary Clinton's response to a question from the audience at a Town Hall meeting in Congo yesterday. You haven't? Oooooh, go look at it; the video is here.

In the video, regarding a certain issue, she's asked, "What does Mr. Clinton think through the vows(?) of Mrs. Clinton...?"* Hillary,...uhhhh, takes umbrage. In response, she says, "Wait, you want me to tell you what my husband thinks? My husband is not the Secretary of State; I am." After a pause, she says, "If you ask my opinion, I will tell you my opinion. I'm not going to be channeling my husband." (I think her body language and tone make that little added emphasis accurate.)

On the one hand, I don't think it's unfair to expect our nation's chief diplomat to be....oh, diplomatic? On the other hand, I can imagine how that question might sound a wee bit insulting to Ms. Clinton. And just look at the lady. She's clearly having a bad hair day. She must be exhausted from the trip she's on. (Hey! Flying around the world on Sec. State's little Cessna is a big step down after you're used to Air Force One as a First Lady. Cut her some slack.)

*I've seen reports that claim the question was asked by a college student who got a little overexcited and misspoke, and others saying it was a translator relaying the question and screwing it up. All reports seem to agree that they shook hands and made nice after the event was over.
Posted by Nathan at 3:37 PM

Not a flattering look for her.

Nathan,
I would have missed this altogether.
( I live under a rock )

My FAVORITE part was the head bobbing while listening to the question.

kind of like when steve martin discovered Lawrence Welk.

Add in that part of her trip was to meet with (war) rape victims in the Congo (which I believe was to be the very next day). So I think she was a little touchy about the subject of male dominance of society that day.

It sounds like she was asked, "What does Mr. Clinton think through the mouth of Mrs. Clinton...?"; I finally looked at the clip on YouTube since I couldn't get the link you have to work (I'm not blaming you--Firefox on Linux can be tricky with some video formats).

I think the question was extraordinarily insulting, and I'm not sure how Ms. Clinton could possibly have answered it "diplomatically" without being a pushover, so I'm not exactly getting riled about the "meltdown." Matter of fact, I keep trying to imagine how Vice-President Biden would react to being asked what Jill Biden thought about something; but the truth is that I can't get past the fact that he'd never be asked that, notwithstanding the fact that Jill Biden is (by all accounts) the smart one in the family. And the fact that nobody anywhere in the world would ask Joe Biden that probably explains why Ms. Clinton's ire is understandable.

I'm not a huge fan of Ms. Clinton, but I'm giving her a pass on this one.

Overall, I give her the same pass. And I actually can't find fault with any of the words she used. But her tone, mannerisms and gestures combined to be...oh, i don't know...strident? She could have done better.

(And I agree on the concept of the comparison to Joe Biden being asked what his wife might think, but it's not a perfect analogy. President Clinton maintains serious RockStar creds in Africa. It's not really that surprising that someone wants his take on things (even if they are asking entirely the wrong person).