Do You Think That Would Be a "C" Ticket or an "E" Ticket Ride?

Yesterday's post got me thinking about Theme Parks. Stick with me; it'll make sense in a minute.

All Location Agreements say basically the same thing; that we have permission to film there, that the guy signing on behalf of the location is actually authorized to give permission, and that the Producer will be the owner of all the footage we shoot. It can take up to three pages of Legal-sized paper to say those things.

I've been asked to cobble together a short-form of the agreement for the job I'm about to start. I'm all for that idea. Shorter is betterer.

Anyway, let me show you some language that appears in most Location Agreements in one form or another.

You can certainly understand how that might come in handy. Say you shoot a new 007 movie and you shoot a really great chase scene through some really cool space-aged factory full of nifty machines and bright shiny panels and buttons. You might want to duplicate that for a ride at your theme park. That makes sense.

With apologies to W.P. Kinsella and Phil Alden Robinson, please imagine James Earl Jones reading the following paragraph to you:

People will come. They'll come to your theme park for reasons they can't even fathom. They'll turn up your driveway not knowing for sure why they're doing it. They'll arrive at your door as innocent as children. "Of course, we won't mind if you look around", you'll say. It's only $20 per person. They'll pass over the money without even thinking about it. And they'll look at cheap recreations of sets and it'll be as if they dipped themselves in magic waters. The memories will be so thick they'll have to brush them away from their faces. . Oh... people will come. People will most definitely come.

So, what, you may ask, would be so great about recreating, say...The Heffernan's Home from King of Queens? How the hell should I know? Maybe you get to pretend you're delivering a package and when you ring the doorbell, the door opens and an animatronic Jerry Stiller stands there and yells at you! That might be fun.

I bet you could set up a street of nothing but shoe stores so Sex and the City fans could pretend they're window shopping.

Really, it works for anything. Would you like to pretend to be part of a SWAT Team? Come visit Crack House- The Ride! 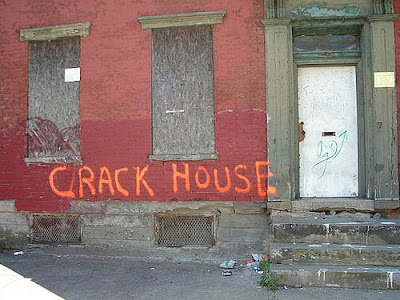 The truth of the matter is that if I were really ambitious (and smart), who needs to build this stuff or have a whole Theme Park just to cash in? I bet I could sell tickets to raid a real crack house! It's not like the owners pay a lot of attention to those properties.

Another thing that got me thinking about Theme Parks is the commercials that have been running for Six Flags. They've still got this creepy guy in all their commercials, but he doesn't dance so much anymore.

Now, he rates the fun level of different activities by the number of flags -- with Six Flags obviously being the pinnacle of fun. So, in one commercial, they'll show some teenage girl with her family at some historic educational place. She's churning butter while an old guy dressed in Colonial garb hollers "Churn the butter! Churn the butter!" In another commercial, a teenager is mortified watching her mother dance to the music of some tweenies pop star. In yet another, a father is teaching his little boy to hit a baseball and takes a line drive to the crotch.

In each commercial, the first activity gets a rating of two flags. Two Flags! I'm not going to say that any of those things sound like fun, but in what universe does getting hit in the nuts get the same rating as churning butter? If you're the hittee, I'd think this rates Zero Flags. If you're the little kid who hit the ball, we're probably up to a Three.

My point is...if they're so pitiful about rating the less fun activities, why the hell should I believe them when they give themselves Six Flags? Maybe they only rate four flags and they're just inflating their rating for the credulous. And if flags are so much damned fun, why don't they just buy a few more and offer Nine Flags!?

Or maybe they assume that anything more than, say seven flags would just overload most peoples' elation quotient.

Just to make this more of an interactive post, I'll conclude with this question. What scene from a movie would you want to see made into a ride? Tell us about it.
Posted by Nathan at 5:39 PM

On the Six Flags ads (we have one here, so get them all the time).

Two years ago they had the lil' old Elmer Fudd looking guy dancing around the park with the Warner Bros. characters and guests. Which was fun because it was different and showed all manner of people getting to the park and having a good time. And you always smiled when you heard that music because you knew he'd be dancin' up a storm.

Last year they had this annoying younger guy with spiky hair doing the 1 flag, 2 flags, 6 flags more flags and everybody hated it. He seemed constipated and pissed at the world, and got about the same response. Bring back the old guy said the survey results.

So this year they combined the two campaigns...Elmer Fudd old geezer with the more flags line AND the dancing tag at the end with the guy dancing off with the characters again. Plus they cut ticket prices to encourage the stay-cation at your local park efforts. Again...advertising gold, well maybe not so much gold this year, but it got people out to the parks again, even if it is in smaller numbers.

And yes, some of those coasters ARE 6 Flags o' fun!!!
E ticket material for sure. And some people reading this may not know what an E ticket is!! They're not old enough!

You know where the 6 flags came from, right?

One of 'em is the Stars and Bars. But they don't tell the Yankees that. :D

Yes, I believe they're still flown from the front of the original park in Texas.