I May Be An Idiot -- A Recurring Theme!

Am I the only one who has never heard of Tom Holt before. I went into a bookstore last week and found myself staring at a shelf filled almost to Terry Prachett capacity. This guy has written a lot of books (starting in 1987 or so). Maybe they just weren't released in the U.S. before? I have no idea, but I know who he is now. 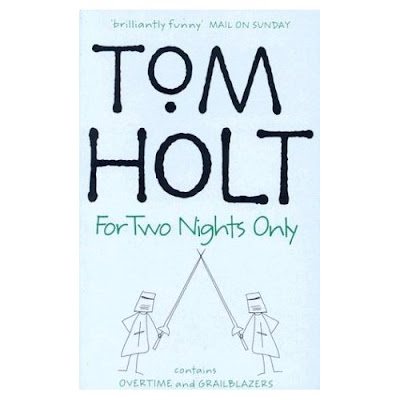 Right now, I'm reading For Two Nights Only. It's an omnibus edition containing two of his previously released novels, Overtime and Grailblazers. I'm thoroughly enjoying it. Overtime is a rather witty book centering on time travel, time demolition, financial advisors, insurance salesmen, the music industry, the AntiChrist, automatons, and bullet-proof hats. Really, I swear it. It's a hoot.

I've just started the second book in the volume: Grailblazers, which promises to have something to do with Aurthurian legend, but also promises not to hew too closely to anything I've ever heard or read about it before. One of the opening paragraphs goes like this:

A flash of brilliant electric whiteness cleaves the darkness and reflects, painfully bright, off a man in armour staggering up the steep escarpment of the fell. His visor is up, and his face is lined with agony. He is an idiot. You can tell, just by looking at him. It's not so much his tall, youthful, athletic build or the sopping wet golden hair plastered like seaweed down his forehead that gives him away; it's just that nobody with anything substantial between his ears would climb up a steep mountain in full armour in a thunderstorm.

How can that not grab you?
Posted by Nathan at 1:49 PM

Holt can be up and down, but I generally like his books. My favorites are the novels built around the evil J.W. Wells & Co, which he uh, borrowed from Gilbert & Sullivan.

From what I can tell, he's borrowed most of this themes...but he doesn't seem to have paid much attention to the original by the time he gets where he's going.

Grailblazers starts out making you think you're in for a Sleeping Beauty type tale...until she tells the knight to bugger off and goes back to sleep.

I have one of his books that I've never cracked open and can't remember the name of. Does that count?