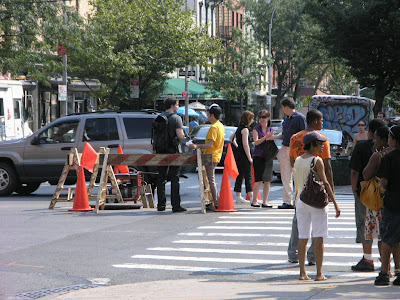 What the hell is that? See that ladder leading down into a manhole cover? Do we have some subway stations you can only get to by climbing down a ladder into a hole? Nope!

What you're looking at is the entrance to the Atlantic Avenue Tunnel (via a small manhole in the middle of the intersection of Court Street and Atlantic Avenue in Brooklyn), and this is one of the periodic tours where folks can go down and get a look at the place in person.

The short version is that there used to be a train that operated from the foot of Atlantic Avenue at the East River (meeting the ferry from Manhattan) with the intention of connecting to the Long Island Rail Road and eventually, (via more ferries) all the way to Boston. The project underwent a few incarnations, starting with a train at street level, then an open cut in the street (a big ditch, really) and finally a tunnel. Between the fact that the line impeded traffic trying to cross Atlantic Avenue and a few other problems, (the grade between the river and Court Street was too steep for early locomotives; the smoke was a blight on the neighborhood, the locomotives had a nasty habit of exploding), the line was never a great success and never even remotely approached popularity with the nearby residents.

In the early 1860's the City of Brooklyn (it was separate from NYC til the end of the 19th Century), assessed the adjacent businesses $125,000 to have the tunnel sealed up and closed. (I'm not clear on whether or not that was what the contractor was "paid" to do, but instead of filling the tunnel completely, they just sealed up the two entrances.)

The tunnel quickly faded from memory and became a thing of urban legend for over 100 years. It was searched for in the 1930's (there were rumors of bootleggers and other nefarious activity) and during WWII there was talk of finding it and refurbishing it enough to serve as an air raid shelter.

In 1980, an engineering student by the name of Bob Diamond, finally found an entrance after researching old news articles and city engineering documents. He founded the Brooklyn Historic Railway Association and hopes to eventually create a working trolley line with spurs along the waterfront and through the tunnel. Go look at the BHRA's site for pictures and some cool documents about the tunnel's history and planned future. 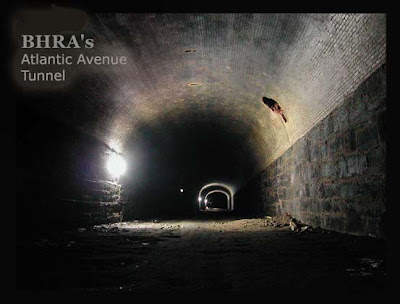 P.S. I was down there once in the late 80's to scout it for some project I can't remember. It's one of those places I'd love to bring a shoot to, but there are still some pretty serious access problems. To the best of my knowledge, there's still only one way in and out (through the manhole cover that's even smaller than most manhole covers), and the idea of getting a full crew and equipment (much of which won't fit through the entrance) is pretty daunting. Without a compelling reason to use it, I'm pretty sure that most producers would kick my ass and then fire me if I suggested it as a location. Ah well...one of these days.
Posted by Nathan at 9:19 AM

It could be used for one of those "hand-cam horror" movies that are all the rage with the kiddies these days.

I've never worked on one, but I don't think "hand-cam horror" movies go in big for paying for things like location managers. Bastards.

I ain't taking no crane down in that hole.

Nobody's getting much more than a pair of roller skates down into that hole. It's not just the width of the manhole cover, it's how much clearance you've got until you reach the floor of the entrance.

Think of it this way...if it's too long to go into an elevator without opening the roof-hatch, leave it on the truck.