It's Saturday! This May Turn Into One of My Patented Multi-Posts™.

A couple of days ago, I recounted the details of my wondrous visit to Key West in 1979. There are two developments. 1.) I mentioned that I'd be friending my co-star, David and making sure he'd have an opportunity to fill in some blanks. He actually wasn't all that easy to find. There are 167 Davids on FaceBook who share his last name (a name I wouldn't have thought all that common). Well, I found the right one.

He's still a Canadian -- don't hold that against him. He's also visiting NYC this weekend, so we'll be getting together at some point. I'll get him to add his memories of the trip. 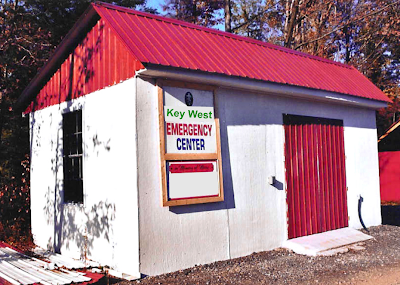 2.) You'll recall that I ended that tale by giving the Powers-That-Be in Key West the opportunity to fete myself, GF, David and his S.O. in an attempt to get us to alter our opinions of the place. Not only have the offers not been forthcoming -- I don't even show any hits originating in Key West. Me thinks their Auto-Google-mania (an obsession with Googling one's self), is sorely deficient.

Once upon a time, I mentioned that we had a single woman living directly above us and that she was a heavy walker. We never had any question whether she was home or not and, in fact, could track her movements through her apartment quite easily because she was incapable of moving anywhere without clomping! I always thought we had a fairy tale troll living up there.

Well, yesterday, the new people moved in. It's a couple with an infant. And a dog. And a nanny who comes during the day. And there were four guys with the moving truck.

I could barely hear anything from them even while they were hauling all of their stuff upstairs.

I think I'm going to like these people!
Posted by Nathan at 10:33 AM

Wait until the infant cries, or the dog barks.

In the apartment I lived in as a teenager the woman upstairs was normally silent when she walked, except when she wore high-heels. And then each step was like a little gun-shot. We heard other things, but that's a tale for another time.

When I was in the last of my Houston apartments, there was a married couple with 2 children living upstairs from me. One of the children was an infant, so I'm sure that child didn't wear clogs. But the woman and her daughter both wore clogs. I started referring to them by them the very appropriate name "the Elephants Upstairs." I even entertained writing a book of that name, hopefully to be read by them so they would understand just how their clogs drove their downstairs neighbor over the edge. But such was not to be. Instead, I moved from Houston to Boston, where being somewhat insane is looked upon as an asset rather than as a liability.

Now you know "the Rest Of The Story!"

I once lived in a condo next to three young beautiful lesbians. Dream right?

Fuck no. Those bitches fought all the time. They had LOUD noisy bang the wall sex every damned night complete with screaming and moaning (seriously, like cats in heat).

All three of them had car alarms that went off if a squirrel sneezed anywhere within a three block radius - and squirrels apparently only sneeze at 2AM.

That cured me of living near anybody else ever again. Now I live in a big house in the middle of ten acres and my bedroom is soundproof.

I also lived in a stateroom directly under the helicopter flight deck on a US Navy cruiser.

You haven't lived until you try to get your one lousy hour of sleep when they're running flight ops. Nothing like a 600lb tie down chain being dropped repeatedly on the steel deck about 2 feet above your head. It's like trying to sleep inside a running cement mixer.