Take That Home With You. You Can't Leave It Here!

Today's missive is about stuff you don't want anymore.  Or stuff that comes into your possession...that you'd rather never to have possessed. Here's a key thing to keep in mind:  If you don't want something, odds are nobody else wants it either.

I think we can all agree that nobody loves dog shit.  Most places make you pick up after your dog and dispose of its output somewhere other than the sidewalk.  That's a good thing.  Most people obey this rule out of good citizenship or the possibility of being shamed by witnesses.  I'd lay odds that actual enforcement isn't needed all that often. And honestly, unless a cop witnesses someone walking away from their beloved Fifi's deposit, what enforcement options are there? Yes, I'll admit that when pooper scooper laws first went into effect, I had visions of cops leaving tickets on steaming piles all over the place. I was a little puzzled about what this might achieve.

But it turns out that some people are really concerned about enforcement. In Fairfax, VA, a case is about to go to court because one woman has accused another woman of not cleaning up after the dog she walks. The Plaintiff's got pictures of the alleged poop to present as evidence.  The article goes on to talk about some places that make you register your dog's DNA so that offending poops can later be matched to the miscreant for prosecution.

This may seem overzealous to some of you, but I totally understand. As you should know, we have three cats. One of them -- and I'm not sure which one -- has particularly smelly poops and you can't go anywhere near the litter box for like 15 minutes after he--or she-- has been in there.  If I could only assign blame I might be able to do something about this problem. I'm not sure what I'd do about it, but I think figuring out which one is the mad bomber would be a good first step. Gimme a break--I can only think of so many things at one time.

Right here in New York, the Metropolitan Transit Authority has decided that there's too much garbage being left in the subways.  To combat this problem, they've come up with an idea that's sheer GENIUS!  They're running a pilot program where they've removed trash cans from a few stations. This makes perfect sense to me. If someone throws trash on the platform because they're too lazy to hold onto it until they can navigate the 50 feet to the next trash can, of course they'll hold onto it until they can get up to the street and find one. 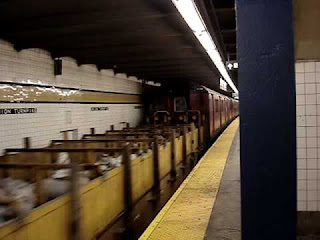 The garbage train will be a thing of the past in no time.

I think we can extend this logic to solving some other problems.  It's one thing dealing with stuff that actual New Yorkers need to get rid of every day, but the city is further burdened by stuff that visitors want to get rid of.  There are a couple of million commuters who come into the city every day and a bunch of them drive.  There are trucks that come into the city every day to make deliveries.  And what do they all have in common?  They create exhaust.  And they leave it here. I don't think it's too much to require that anyone driving in from outside of the city limits should be required to have a hose pumping the exhaust into the passenger compartment for storage until they leave the city again.  I realize this might cause a big buildup of exhaust at places like the New Jersey side of the GW Bridge, but let New Jersey figure out what to do with it.  If they're so great, let them come up with somewhere for those guys to work on their side of the bridge.

We also have a lot of tourists visiting the city.  According to something I found on the internet without looking very hard, there are almost 70,000 hotel rooms in NYC. Now based on my usual strategy of making stuff up, let's assume that 85% of those rooms are filled on any particular day.  And let's further assume there's an average of 2.87654 people in each of those occupied rooms. That translates into more than 6.8 BILLION people visiting the city every year. (My math may be a little off, but it's pretty damned close -- just stick with me.)

We like that those people all eat in the city.  They help keep our restaurants and our street vendors employed.  But an unfortunate result of all that eating is that they digest that food while they're still here.  And that's putting a real burden on the city's sewage treatment facilities.  I don't think it would be unreasonable to remove the toilets from those 70,000 hotel rooms.  That astronaut lady who drove from Texas to Florida a few years ago to resolve a love triangle wore a diaper for the trip.  I've seen what they call toilets in some parts of the world and wearing a diaper (and taking it home with you), doesn't seem like such a bad trade off!

I bet there are a lot of other ways we could keep New York cleaner if we just put our minds to it.

While I was in college I had a friend who did this. It will solve all your problems. Solution to all Nathan's poblems

Your link is broken so I'll just assume you meant the one about feeding the exhaust back into the car.