Official Motto: Kicked out of the best places on Earth and we're still here for you!

As you all certainly know, the "saved" will be called home shortly before the end of Shabbat this week (and they thought we had the wrong day of the week all this time...) I just wanted to reassure the un-holy among you that us Jews will continue to be here to see to your Earthly needs on Monday!  There will be no interruption in the supply of bagels, latkes, challah, corned beef, chopped liver (I can't speak for pate'), gefilte fish, or Cel-Ray Soda.

And you needn't fear that the impending tribulations will deter us either.  If the power goes out; So what!  To quote every Jewish Mother since Noah's kids made Emzara ride in steeerage, "Eh, so I'll sit in the dark."  And I guarantee you those three rotten kids never missed a meal!  There will be no wailing an gnashing from my contingent!

For your convenience, I'm republishing this map so you'll know where to find us.  That way, you can find both the areas where life will be going on without missing a step as well as the areas that may suddenly have a housing glut. (Hint: Life on the Upper West Side will be utterly indistinguishable from how it is today, but you won't be able to get a decent blintz in Krakow.  Hey! Did I tell them to get rid of us?) 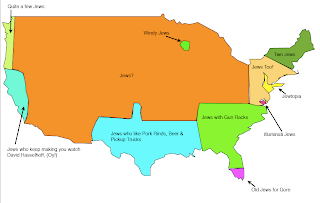 Another thing...this isn't just about comfort food!  Have you ever been one of those putzes running around bitching and moaning,"Oh those Jews; they own the banks and they control the media."  Go ahead and bitch about it on Monday when that machine in the wall still spits out Twenties like nothing even happened.  Whine a little when How I Met Your Mother comes on your TV right on schedule!

To paraphrase Colonel Jessep (written and directed by JEWS!),  "Winthrop, Muffy, Chauncy... we live in a world that needs food and money and entertainment. Who's gonna do it? You?  We have a greater responsibility than you could possibly fathom.  You have the luxury of not knowing what we know.  And our existence, while grotesque and incomprehensible to you, saves lives. You don't want the truth because deep down in places you don't talk about at parties, you want us in that office, you need need us in that kitchen. We use words like Matzoh, Kugel and Market Share. We use these words as the backbone of a life spent defending something. You use them as a punchline. We have neither the time nor the inclination to explain ourselves to men who rise and sleep under the blanket of the very necessities and luxuries we provide, and then questions the manner in which we provide it. We would rather you just said thank you, and went on your way."

So, come Monday morning, when a bunch of your neighbors are standing around in a daze saying stuff like, "Didja see that?  Ralphie just freakin' FLEW up inta the air!  Ffffffft!", your Jewish neighbors will be opening the banks and delis on time.  We'll be yelling "Action" and "Cut" on movie sets like Abraham Lincoln: Vampire Hunter, so you'll have new stuff to watch in a couple of months. *  We'll be driving 50 mph in the left lane with our turn signals on!

So we'd rather you just say "Thank you" and don't forget to tip you waitress!

The Jews: We were here before you showed up and we're not going anywhere!**

Well that's good. I don't know what I would do without good bagels. Anybody can boil bread, but a good bagel is better.

Help! It looks like I'm on the border, and I can't tell whether I'm gonna be in Two Jews, or Jews,
Too. I gotta know. Just north of downtown Boston. Where is that gonna end up?

Swampscott should be OK. Charlestown...not so much.

Damn you! I sprayed my keyboard down here in Jews Too (bordering on Jews with Gun Racks).