By now, I guess you all know you've only got a day-and-a-half until all the really holy people get lifted up offa this here earth and the rest of us - myself definitely included -- get left behind! Well, there's been a lot of misinformation running around and since I know stuff, I thought I'd try to set the record straight on a few things.

First off, they've got the date wrong.  If there's an imminent rapture, it won't happen until sometime after 5:00pm EST on Wednesday May 25th.  Do any of you idiots really think Oprah would schedule her last show to take place after the rapture?  I mean, c'mon!  She's Oprah, dammit.  If she doesn't know this stuff, nobody does.  I'm not saying she's scheduled to be leaving, but she definitely counts the rapturable among her target audience.  There's no way in hell, no pun intended, she'd give up one scintilla of market share for such a momentous occasion.  Ergo, no rapture until after Oprah's last show.

This is one popular view of how the rapture will take place.

You're driving along and suddenly, if you're among the chosen, you suddenly just disappear.  Some poor schmuck is left in the backseat with nobody controlling the car and, of course the rest of the drivers on the road are now faced with a bunch of driverless cars coming at them.  This is, of course, ridiculous.  Anybody worthy of being raptured will be hanging out in a meadow somewhere, eyes cast upward, waiting for that penultimate moment -- the one when they know they're going but haven't quite gone yet.  I don't care how virtuous these people are supposed to be; I guaran-damn-tee you, they're hoping they get just long enough to utter a couple of "Told-ya-so's".  They've been insufferable bores for as long as you can remember; you think they're going out without rubbing our noses in it?

Actually, if there's a rapture, I think it'll look more like this. 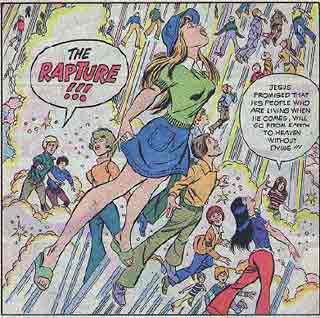 I bet you can totally see up that girl's skirt.  But only if you're left behind!

Another subject I'd like to address is looting.  There's a meme going around about how it's gonna be prime looting season immediately after the rapture takes place.  Clearly that's just bullshit.  Think for a minute people. 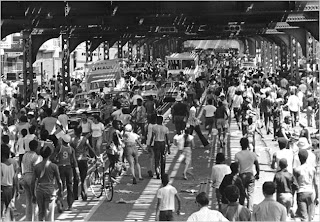 There are going to be a whole lot of people trying to get their hands on all of those sweet panini makers just lying around for the taking. And since none of the competition was rapture-worthy, they're all going to be out there trying to get their share.  Furthermore, since you don't actually have to be a bad person to be left behind, odds are, you won't even be that good at looting. 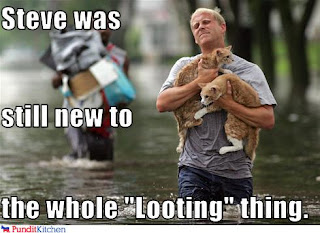 You, will then be free to just waltz in and take the inflatable mattresses and blankets and stuff that are all still quite useful.  In the meantime, your brick and campfire will have become the state of the art panini maker.  You're king of the hill.

If you're only scraping along during this period, don't worry too much; according to the prophesies, you've only got to hang on for another 5 months.  And why, you may wonder would you bother trying so hard to hang on if the end is a mere 5 months in the future?  Well, apparently, if you make it to the End of the World, you get a free pass on Hell. (I don't know why, I just report the news as I find it!)  Anyway, by the luck of the draw, if you were a total fucktard (or a mere unbeliever) during eons of history (or 6000 years, as long as you're rubbing our noses in it), you went STRAIGHT TO ETERNAL DAMNATION IN HELL as soon as you died.  But if you can hold out until the End of the World™, you become -- as it were -- an ex-parrot;  You merely cease to be!

Personally, I'm hoping that parts of this (the worthy being raptured) are true, while other parts (cataclysmic events) are not.  Think about it.  The rapture happens, and from your point of view, nothing is different.  But a couple of weeks later, you realize it's been ages since anybody rang your doorbell trying to bring you the Good News.  You can't remember when the last time was you saw that guy standing on the corner speaking in tongues at the top of his lungs.  Suddenly, you realize that some of the most annoying people on Earth...aren't anymore.*

**There's an old joke about St. Peter having a bunch of people in Heaven's Elevator and each time he stops, he announces which denomination that particular floor is for. At one point, he announces, "Folks, I need you to all be really quiet while we pass the 437th floor. That's where we keep the Evangelicals and it would totally ruin their afterlife if they found out anybody else was here."
Posted by Nathan at 3:21 PM

Bad news. Based on the haircuts in the second rapture picture (the one that looks like it came from an Archie comic) the rapture already happened in the '70s and we all missed it. Darn.

I thought it was distinctly Scooby-Doo-esque.