She's Off To Off The Wizard...Or, A Couple Of Things I Ran Across Today.

First up, is Dorothy: Locked and Loaded, A Collaborative Oz Novel. 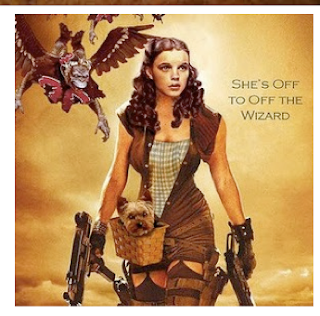 (Illustration ganked from Dorothy: Locked and Loaded)
In the words of the creators,


"Dorothy: Locked & Loaded" is the serialized, collaborative novel effort of five writers, each of whom will play a very specific role within the story of the return to Oz of "Dorothy". Only this time, it is not "Dorothy Gale" of the original; it is "Dot", her granddaughter, who grew up listening to the wild and hardly believable tales of her grandmother's adventures in the land of Oz."

Each chapter is written in the first person by a different author playing a different character, so we'll hear from Dot, a Narrator, Scarecrow, Tin Man and The Cowardly Lion.  Toto is a .45 ACP in this retelling, so I imagine he'll speak loudly from time to time.

I've only read a few chapters so far, but I'm having fun with it and I recommend you give it a look-see.

(Not for nothing, but this is essentially the type of thing a bunch of us tried a while back and gave up after a fairly short period of time.  These guys have been at it since May of last year and they've produced 51 chapters!) 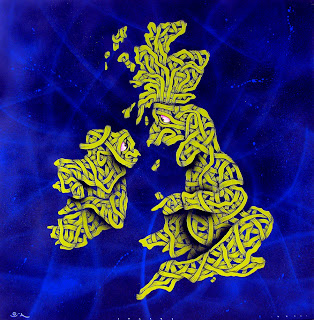 This one is called UK Internal Conflicts and I'll steal Strange Maps' description of it as "ribbony".  That's as good as I'd ever come up with, so I won't try.  Anyway, go look at Otto's site.  At the bottom of the linked page, you'll see buttons for navigating to some of his other works.  A lot of them are pretty terrific.
Posted by Nathan at 9:47 PM

It was all Sophie's fault.