It's A Grand & Glorious View!

I can tell we're really getting close to beginning to shooting this TV show because I have to get into the office earlier each day. This is what things look like on my drive into work. 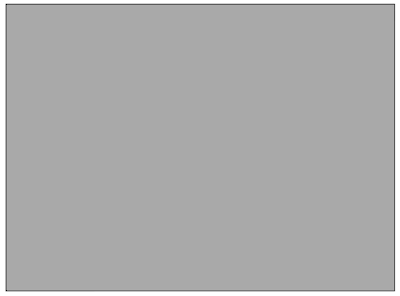 Today was especially lovely because the sky, in addition to being dark, is exceedingly wet. Note, that I didn't exactly say it was raining, it's just a wet sky...or the optimist in me would say it's kinda like a slightly dry swimming pool...if it wasn't for the fact that I keep the optimist in me locked in a deep dark dungeon. He's such a chipper jerk. Who needs that shit early in the morning?

We have monthly parking spaces at a parking lot a block and a half from the office. I had been pulling in a little before 8:00 every morning and there'd usually be two or three cars ahead of me waiting for one of the attendants to give them a claim check so they could dash off to work. The attendants are really slow and waiting for that claim check can practically double your commute time. Now that I'm coming in between 6:30 and 7:00, there are usually 8 to 10 cars ahead of me waiting. Where the hell are all these people going? As soon as I figure out the optimal time to show up so that there's no wait at the lot, we'll start shooting and I'll just being going straight to location every morning instead of the office.

Overlooking the parking lot, is this ginormous billboard for Armani underwear featuring Victoria and David Beckham. 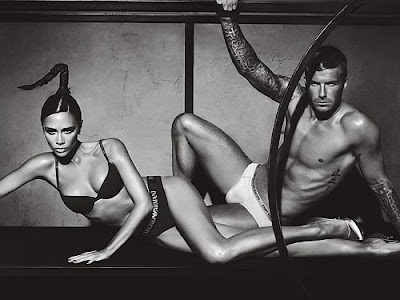 Look, I know it's supposed to be all cool and aloof and shit, but Victoria, David...I'm sick of looking at your pouty mugs every morning. Hey! You're rich and people pay you boatloads of money to pose in your underwear and you get invited to all of the coolest parties and David can at least play a game really well, but all Victoria ever did was sing in some lame girl-group a couple of eons ago. What the hell have you guys got to be so morose about. Smile, Dammit! You've got it made. All your damn billboard makes me think of is that I'm on my way to work and you probably just got home from some hellatiously bitchin' party and now you're going to take a shower in your champagne dispensing bathroom and then crawl onto you cash-filled mattress (Dollars, Euros, Yen...whatever might come in handy). You are not making my commute any more joy filled.

And that's not going to get me to buy any of Georgio's underwear! Just sayin'!

P.S. In breaking news, it has been revealed that every small child in America is currently not floating over Colorado in a homemade weather balloon...none of them. Similarly, none of them are in the cargo holds of 767's currently on the polar route. There are zero children in the lions' cage at the Bronx Zoo. Thousands upon thousands of children did not fall into a sausage stuffing machine in Omaha this morning. Video and more news as events continue to not warrant.

Who runs around in the their high heels when they're only wearing underwear?

Somehow I doubt anyone did any running except the one fetching her fruit juice smoothie.

Have you not seen some of the weird-ass stuff Victoria Beckham wears?

Ya know, if I was stuffed into that crap and made to twist into those incredible poses, I'd be pouty too after hours of shooting!

But yeah, not what you want to look at first thing in the morning.

And then there's the whole "Pebbles on Gor" hairdo. Just so not making me want to buy what they're selling.

You, Steve, are not the target demographic. That whatever source of benevolence you believe in for that. :D

Unfortunately i work in the Big Apple and
see plenty of that demographic. They ain't much nicer to look at with their clothes on.

Thank. I meant to say thank. Two groups of drunks in my hotel last night. Not a lotta sleep.