You And Your Fancy-Shmancy Technological...Stuff!

Yesterday, I was standing around with two of the guys I'm working with (OK, we were smoking out on the fire escape), and they started talking about video games. Guy #1 says he was never really into video games and didn't play them much as a kid. Guy #2 says when he was a kid, there was only one of his friends who had a Nintendo and the rest of the kids on the block would gather in a circle behind his couch to watch him play. (Q: How many Teamster's kids does it take to play a game of baseball? A: Teamster kids don't play baseball; they take folding chairs to the park and sit around watching the other kids play.)

I think I got my first video game when I was about 35. When I was a kid, I had a stick!

Here's the deal. When I was actually a kid, there were pinball machines. They were entirely mechanical and the numbers were on little wheels that rolled over to keep your score. Eventually, the numbers became digital. I think I was in college before I regularly played anything that could actually be considered a video game. It weighed 300 lbs. and it stood in the corner at a pizza place a couple of blocks from Kenmore Square. I think it was called Brickles. 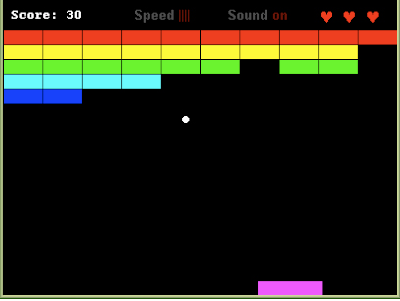 My college friends and I would go get really greasy cheese-steaks at the pizza joint and feed minor fortunes worth of quarters into that damned machine trying to get the high score. Eventually we'd have to go home to the dorms (where we had stereos that played LP's on vinyl and CDs were still almost a decade in the future).

Like I said, when I was a kid, I had a stick...and I liked it. We also had bicycles. We used to have races around the circular driveway in front of the Wolfs' house. Nobody ever officially won. The big kids would usually lap the little kids a couple of times and as they were closing in on the finish line, since they were approaching lapping the little kids again, it would looked like they were behind the little kids, and the outcome of the race would dissolve into screaming and a little hitting and a little crying and.... We had some conceptual problems with how to count who had completed how many laps. My stick would have come in handy but I never thought to bring it to a bike race.

We didn't have helmets or any kind of pads. My oldest brother wiped out once and lost a tooth. Mom threw the tooth into a glass of milk and hauled him off to the dentist while the rest of us just ran the next scheduled races. (Going to the dentist in those days hurt! I won't exactly compare it to having a limb amputated while biting on a leather strop, but still...)

We had cap guns. I could wear my holster and my two guns to school if I wanted to. (I probably had to leave the caps at home, though.) We liked our cap guns just fine, but we discovered that if you put the roll of caps on the concrete driveway and hit it really hard with a hammer, they'd all go off at once. That made a much more satisfying BANG! I know we never had any adult supervision for this and I also know that nobody had a problem with us blithely bashing the shit out of (admittedly small) explosives in our front yard.

At one point I decided to become an artisan. I'd take a bunch of fishing weights (pure lead), smash them flat with a hammer (damn that was a fun hammer), and then engrave crap into the resulting medallions with a chisel. Ahh...craftsmanship blending beauty and toxicity!

There was a creek we used to play in in a neighbor's back yard. OK, it was a drainage ditch and you'd have to dig an indentation in the bottom to make it deep enough to put your face into it to drown, but still...

I don't want to sound too much like an old fart, but I've seen some kids around lately who could probably afford to spend some quality time with a good stick.
Posted by Nathan at 10:14 PM

We had lawn darts. Now that's a game that made you a man! I often tell my kids about the 'good old days', when fun was what you made with what you had. Including sticks. This past summer son had a birthday party with about 20 of his friends. Being the chaparone, I decided to make the best of it. We have a tree that's perfect for scampering up into, and I saw one of them trying to climb it with great difficulty. I jumped up into it in a matter of seconds, to which this kid said "how'd you do that!" I jumped down, and did it again. for the next half hour I watched as one teenager after another tried to repeat the stunt. None could.

It was unbelievable to me that these kids can't even climb a bloody tree! Here's a fun idea - get the hell outside and entertain yourself. Of course, they won't until Nintendo makes a video game that simulates climbing trees, or playing with sticks.

For the record, playing Tetris as a kid was awesome training for loading grip trucks.

Now tell me which game was great practice for the 100-meter 4/ø haul. (For the uninitiated, that's one of the premier events in the "Grip Olympics", along with "traffic-cone-ring-toss and "how far can you walk with 5 30lb. sandbags stacked on your head".

Yeah, sticks! I remember a few rock fights as well, using the neighbor's steel trash can lids for shields.

And ramps! Can't ride a bike without trying to jump over something. Like somebody's brother (sorry about that, Mike.)

I've got a vague memory of seeing some guy on TV balancing cinderblocks on his stomach and then another guy breaking them with a sledge hammer.

This gave us the brilliant idea of placing a board over someone's stomach and using him as part of the ramp. Now that you mention it, jumping bikes over him might have been a better idea. Oh well. I'm sure he's forgiven us by now.

Keith, I know exactly what you mean. I have young relatives who whine when their mom makes them go outside, because they want to play with their various Gameboys and Nintendos and whatnot. Mom makes 'em go anyway.

Nathan, I bought a bicycle this year, and actually road it around and around. Well, it was move oval and oval, and the oval was four miles with inclines where I struggled to get up while wise-ass kids zoomed by me, but it was still a bicycle and I don't yet have a helmet, although the bike place tsked-tsked when I didn't get one with the bike.

I got a bike about 15 years ago. And I bought a helmet. And I rode it through traffic in Brooklyn and decided I didn't like riding on Brooklyn streets with anything less than 1500 lbs of steel surrounding me.

The bike's in the basement. With the helmet.

We lived next door to the school bus garage, jr high & elementary schools. Our bike races were around the bus oval. And the snow plow blades being stored beside the garage made great play areas!

OH, and in the winter if we had a really big blizzard, our side of town dumped all the snow onto the the front part of the school property, between our house and the next. It made fine sled & saucer runs that would be nearly 2 stories high and could run well over a block in length!!

And we had sticks, balls & jump ropes. The neighbors had climbing trees and a FENCE you could walk all the way around their house on!

We had a tree in our backyard that the neighborhood kids called "the climbing tree" because it was just that. Many a time I climbed up that sucker, went hand over hand along one particular branch until close to the end and jumped down. We also wandered the neighborhood in a pack playing Mission: Impossible or Star Trek or cops and robbers with water pistols, sticks, and a set of walkie-talkies (!!!) that someone got for Christmas or Chanukah one year. Fun times.

Not only did we do the caps n hammer thing, we'd build model cars, paint them up, put on the decals, the whole thing -- then set them on fire in my neighbor's back yard in clear view from my mom's kitchen.

We rode our bikes far and wide but got home by dark.

I have fought with my wife over whether our son should wear pads and helmets. Whenever she tells our son to put them on he doesn't want to ride his bike/scooter/skateboard. She gets pissed off when I let him run out without the pads but at least he's out doing something.

Mostly now he sits inside with his buddies playing Halo.