Here's a spider web I noticed earlier today. The right side of it is anchored to the side of our front steps and the left side goes to a little evergreen in the neighbors front yard. 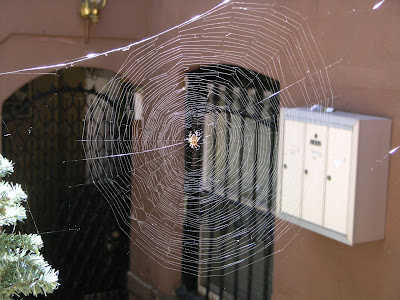 In case these pics don't give you enough perspective, trust me -- that's one big-ass spider. 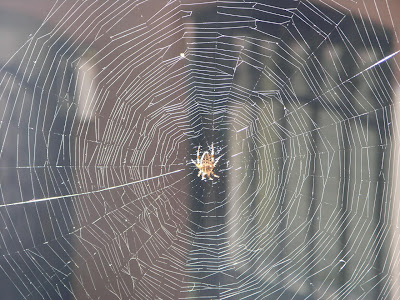 And it's got nothing to do with anything else in this post. I just liked it.

I'm pleased to report that our trip to Home Depot was ultimately successful. I'm not going to go into the details, but we encountered our share of clueless civilians and employees alike. The visit was more painful than it should have been and it took about twice as long as it should have taken but they're going to deliver the stuff we bought tomorrow and that's all I'm going to say about that. Let us speak of it no more.

After we finished our home improvement extravaganza, we decided we deserved a reward and went to a little pub near home that we like a lot. Unfortunately, since our last visit there, they've obviously gone headhunting for staff at the Home Depot. I ordered the brunch burger. I asked for it "medium - medium rare". The Girl Scout taking our order proceeded to tell me that "medium - medium rare" doesn't exist. There's either medium or medium rare; nothing in between. She then went on to tell me about warm centers with no pink left and cool centers with a little bit of pink and I decided the better part of valor would be to just order it medium and shut the hell up. (I like most steaks medium rare, edging toward rare; burgers a little more done; and Prime Rib should be hit over the head and brought to the table squirming.)

Now this may sound like a really small annoyance, but it got under my skin. I wanted to tell our infant server that she could show me any cut of meat and I'd be able to identify it for her. I wanted to tell her that I pride myself on being able to cook most meats, seafood and poultry to exactly the level of done-ness I intend to. Mostly I wanted to tell her to ask the cook to make the burger medium rare and then leave it on the grill another 30 seconds or so. But then I realized that the laws of physics might be suspended in their kitchen or that they might have some highly technical computerized cooking system incapable of cooking meat to any level of done-ness other than three or four pre-programed options. I kept my mouth shut, but I self-heated to...oh...medium rare.

GF ordered what sounded pretty good. It was touted as sort of an Eggs Benedict, only with a crabcake instead of a slice of ham. It showed up dry. GF asked if maybe they'd forgotten something...like the hollandaise sauce. Baby Einstein admitted that they had, in fact forgotten the sauce and s-t-r-o-l-l-e-d right off to let the kitchen know about their error. About ten minutes later, a guy showed up from the kitchen bearing a teeny little condiment cup filled with something that looked a whole lot more like French dressing than any hollandaise I've ever seen. It was the orangest hollandaise ever concocted.

We decided it must have been some sort of computer glitch...or maybe a nod to Halloween?
Posted by Nathan at 6:43 PM

Was that the same pub we went to?

So, let me guess. You had a warm, pink center. Were you steamed, or just broiled?

And a successful Home Depot trip? Since when have you gone back to writing fiction?

Ah, the trials and tribulations of life in a modern big city. Retreat, Nathan, back to your work facilitating the creation of fantasy for us all. Then go home. Do not open the door. Do not venture out among the uncivil. Retreat!

I would share with you the address of a lost-in-the-time-glitch Greek restaurant where they serve perfect Benedicts for Sunday branch (2 eggs, potatoes, small mountain of ham and few slices of grapefruit, coffee refilled on demand) for whole of $7.99. But...looks like you jinxed your Perfect Place. I'll keep mine anonymous.

Now that is one cool spider web.

As for the restaurant issue -- that seems to be happening with a restaurant that I like too. Perhaps it is a country-wide plot...

My spider is bigger than your spider! :D

That is an impressive spider. But I suspect it an "ex"-spider...a spider who has "ceased to be". (or possibly one that is pining for the fjords.)

On the other hand, she probably has thousands of descendants by now.