Finding The Right Needle In A Haystack Full Of Needles.

If I said I was looking for a NYC Rooftop with a brilliant view of the skyline for a scene, you'd think there must be just gagillions of choices. I mean NYC has a brilliant skyline surrounded by buildings, right? And the buildings all have rooftops, right? This ought to be as easy as falling off a log!

But it's never that easy. The script said, "Ext. Chinatown" and "Ext. Chinatown Rooftop". There are three scenes to be shot there. The first is at night showing the arrival of our lead actors at a crime scene where someone has killed himself by jumping from a roof. This scene will take place on the ground. The next scene has a crane shot starting on the crime scene (street level) and rising up to see two actors up on the roof (still night). The third scene is up on the roof and takes place the next morning.

With all of the obvious choices out there, where will we begin? Well, first of all, you may remember that I can get a permit to shoot in Chinatown, but I can't get the equipment trucks anywhere near a location there. The mere fact of the crane shot and the amount of lighting necessary for a night scene takes Chinatown out of the running before we even start. (And with apologies to JTS, the Chinatown in Flushing isn't a viable option since it's way too far from the skyline).

OK, so far we have some limiting factors without even talking to the director. The fact that there's a crane shot showing two actors up on the roof means that we can't use a building with a high parapet wall - we wouldn't be able to see the actors. The fact that the brilliant skyline needs to be in the background when we the crane gets high enough to see our two actors on the roof means there can't be higher buildings blocking the view of the skyline. The orientation of the street and the building to the skyline need to be right, (i.e. if the camera is looking north - at the south-facing front of the building as it rises -- the skyline needs to be behind the building). Since we're using a crane on the street (as well as the emergency vehicles you'd expect to see on the street at a crime scene), it needs to be on a street that we can control. And since we'll be shooting one day scene on the roof and two night scenes on the street and seeing the roof, it's obvious we'll shoot it out of order, (i.e. we'll shoot a split day -- Start around 1:00 or 2:00 p.m. to shoot the day scene and then shoot the night scenes after sunset - at about 4:30 p.m.) That means the first of the night shots will take place during rush hour -- which eliminates a whole lot of places from consideration -- like stretches of Ninth, Tenth, and Eleventh Avenues where there's no way in hell we'll get a permit to control any part of the street leading to the Lincoln Tunnel. (Traffic on those streets move at a snails pace even when the parking rules clear the parking lanes for additional traffic every afternoon.) And the scene on the roof means it has to be a roof that's accessible for getting the crew and the equipment up there.

Then I met with the director and got some more particulars about the crane shot. Look at my nifty diagram showing the dead guy on the street with the camera starting on him and the crane going up until you see a guy on the edge of the roof and a skyline in the background. (That's Perth's skyline, not NYC's because...I have no idea why I stuck Perth's skyline into the diagram instead of NYC. I just did.) Anyway, the director and D.P. add a couple of more particulars about the crane shot. He wants to see into windows as the camera rises and see people inside doing...whatever... maybe watching what's going on outside the window...or being completely oblivious. He wants a building that 3-5 stories tall...tall enough to kill yourself by jumping, not so high that the camera move will take forever in screen time. 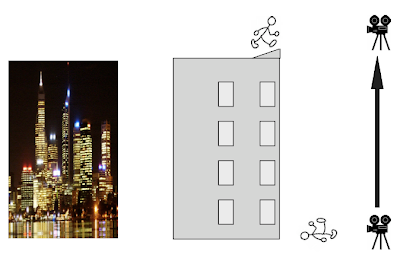 At first, we scouted a bunch of 3-5 story buildings. Then, we decided which crane we'd be using for the shot -- the Super TechnoCrane. It's a really cool crane with a telescoping arm which, among other things, lets you get a shot that goes straight up as opposed to a usual crane which makes the lens describe an arc as it rises. But the Super TechnoCrane (at least the version we were getting), has a maximum lens height of 50'. A quick run back with a laser rangefinder to some of the buildings we'd scouted told us that that most of those building were 65' or more in height. So we started again. We needed a building approximately 40-45' tall (with a 6'2" actor added, we'd be able to get the lens up near his eye level). These were all 3 story buildings.

Here's one roof we considered. It's facing directly toward Times Square and even the buildings you couldn't see behind the Salvation Army building would have made a really cool glow. The only problem here was that when we went up to look at it (with only 5 of us on the scout), we were afraid that we'd fall through the roof. There was no way we were putting a full crew with heavy equipment up there. 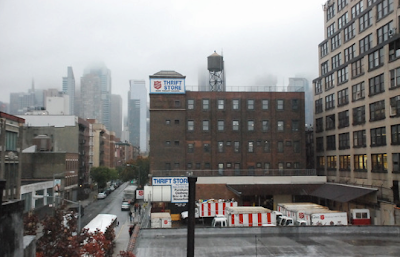 This one wasn't bad, but the view isn't in a straight line with the camera move we intended...the camera would have had to pan off to the right and things just wouldn't have lined up just right.

This one was pretty good but the city didn't want us shooting there during the day on a weekday. 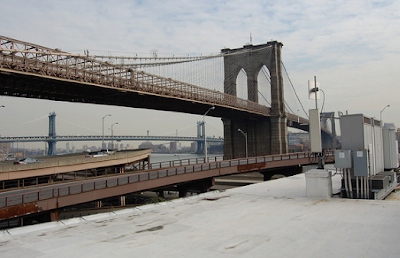 This one had one cool building nearby, but the rest of the skyline was too distant and would have been really small in the shot. 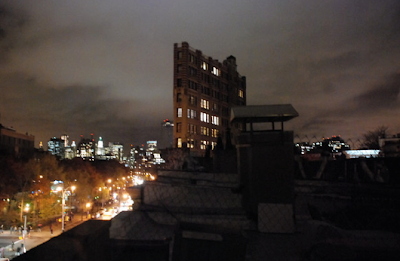 We settled on this one in Long Island City (part of Queens). Mid-town really looms over this one. 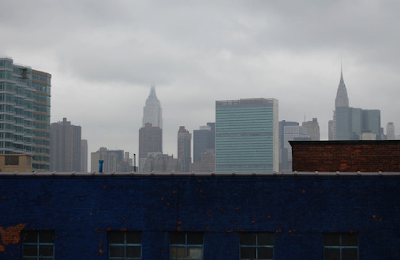 And here we are shooting the scene last Thursday night. There's an 80' Condor (Condor is really a brand of man-lift, but, at least in NY, we call all booms and articulated arms "Condors"...kinda like nobody asks for a "tissue", they all ask for Kleenex), on the left side of the shot for lighting. The white building is the main building we're using. You can also see a scissor lift on the left side of the neighboring building for getting gear and people up there. (The building itself had a roof hatch and a rickety ladder for getting up to the roof.) 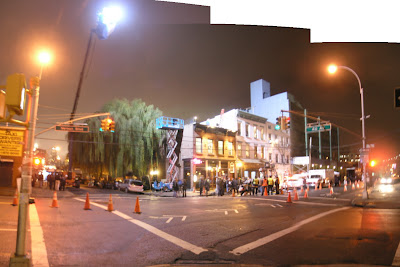 Here, you can see the crane in operation. And you can see all the cones from our traffic diversion, so we could all play in the street without getting killed. 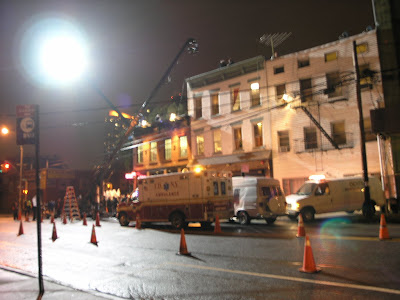 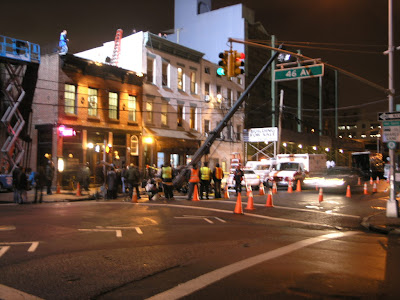 Oh, did I mention that we only settled on this building on Tuesday night at 11:00 p.m....for a Thursday shoot? And before shooting there, we made deals with the owner of our building and the owners of the neighboring buildings on either side for lighting. And we made a deal with the owner of the bar next door. And we made a deal with the veterinarian in the ground floor of our "hero" building and with two of the upstairs tenants. And, we found another location to shoot a scene across the street because the work at the rooftop wouldn't have been a full day's work by itself. We did all that in one day.

BTW, I'm sorry the night shots are a little..uh...soft on focus. I was about to pull out the tripod to get some decent timed exposures when the battery died on me. So you get the ones I shot standing as still as I could (apparently not very).
Posted by Nathan at 12:23 PM

Why can't you film them on any rooftop with a blue screen, and then interpose the brilliance of skyline after? Or is it more money?

Nathan, the shots are all tre' cool! If you hadn't called my attention to the supposed fuzzieness, I wouldn't have noticed. Hey, I still don't really see much to bitch about.

And your insider voice, wow! Not to mention the cool shots. Oh wait, I already mentioned them.

While it's not at all undo-able, using a bluescreen (usually a greenscreen actually) can be problematic on location. If it flaps in a breeze, it causes problems with whatever you're trying to "insert". It needs to be lit with extremely flat lighting...also a difficulty outside of a studio environment.

But the most important consideration (you blasphemous cur), is that if they're inserting locations with a greenscreen, they wouldn't need me. That would be bad.

And thank you Tom.

Couldn't you just move the city closer to the fourth building choice? I mean, that would have been perfect. :)

Nathan! You old warrior, you.