I told you a couple of weeks ago that we were doing some helicopter shots of a car going off of a cliff and I promised you pictures. I haven't posted any yet.

We're not really driving the thing over the edge, but here's a little taste of what we were doing, though. This is the cliff it will look like we drove over. See the little white car waiting there? You can't tell from the pictures, but the ledge is about 100' above the river. 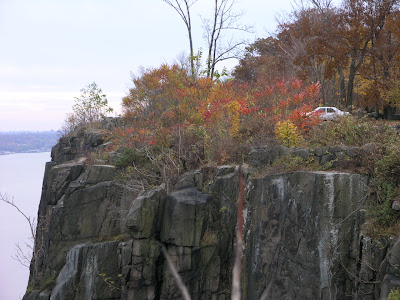 And here's the chopper with the chin-mounted camera. (It's not every day you get to shoot pics of a flying helicopter from above it. In the shot, the chopper would hover level with the cliff edge and then it would do a quick dive toward the river. 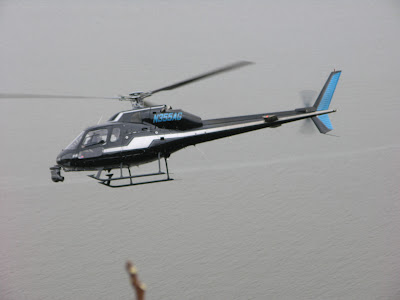 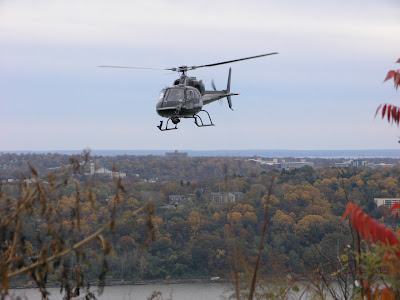 And that's all you get from that today. I have more...but no time to post about it. We're back at the same location today, but with the full company to shoot the stunts of the car fishtailing toward the cliff and then crashing through a break-away wooden guard rail. It'll all look fantastic...I promise.

I will tell you that one of the things we had to have done for the shoot today was get some boulders moved so we could drive the car onto a closed section of roadway. I showed up a few days ago to meet someone from the Parkway Authority to show them what we wanted moved and make sure they could do it for us. Instead of just being a meeting to point to stuff, when I showed up there was a front-end loader waiting for me and a guy who greeted me by saying, "Where d'ya want this shit moved?" I love big machinery and helpful people.

I'll shoot a bunch more pictures today. That'll give me a whole lot more stuff to feel guilty about not getting around to posting. It's delayed Lack-of-Gratification. I'm sure that's good for all of us somehow.
Posted by Nathan at 7:44 AM

Is this off the Palisades Parkway?

I gotta remember that when I get behind on a project and have to explain why.

And Lack-of-Gratification is the name of my next band.