In Which Nathan Is Dragged Kicking And Screaming Into The 21st Century. (Now With Klaxon Sound Effects)

This is what my old phone looked like. You'd flip open the cover and you could make phonecalls. You could recieve text messages. I'm told you could send text messages with it but I refused to learn how because the letters were all on the numbers (three to a number) and they were tiny and...I had no interest in trying to type on a telephone keyboard. I did know how to take crappy little pictures with it but since I never figured out how to get those pictures off of the phone and onto my computer (or anywhere else), that was a pretty useless feature for me. I'm sure it had some other features I never bothered to figure out, but I didn't care -- it made phonecalls.

Over the weekend, I finally knuckled under. I bought a Droid. Look at that sweet sucker! 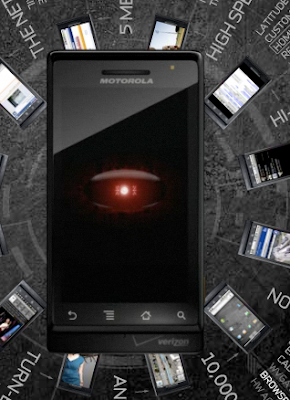 With a full QWERTY keyboard and even a little trackpad. Or you can use the touch screen. 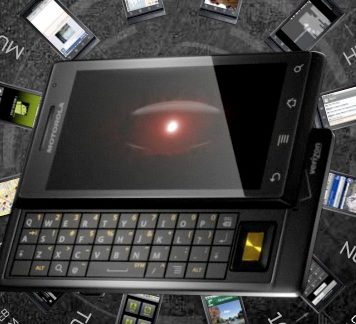 This little guy can do everything! I'm making phonecalls. I'm sending texts (really short ones with lots of misspelled words). I'm getting emails wherever I am. I can find the nearest Starbucks no matter where I am. (I don't really like Starbucks, but the App was free.)

This morning, the nice lady in the phone told me how to get where I was going. (She doesn't even get pissed off when I disobey her "In 800 feet, turn left" instruction. She just figures out the new route and starts bossing me around all over again.)

I could shoot a feature film with this camera (as long as it needs less than 32 Gigs). I totally wasted 45 minutes playing Jewel Drop on the thing this afternoon. I came close to getting it to mate up with the bluetooth in the car I'm driving, but that was because the guy riding with me was doing all of the programming -- until it got the little safety lockout that prevents you from completing the mating unless the car is in "Park". I can't get the car to ask me the same list of questions when I'm in the car by myself and not moving.

The phone makes lots and lots of random noises...one noise for phonecalls coming in, another for emails, another for voicemail, another for an incoming text. There are some other noises it makes and I've gotta be honest, I haven't got a fucking clue what those noises are trying to tell me. (A year from now I'll probably discover that one of them was a noise telling me that Verizon would have given me free service for life if I had only called them back within 2 days.)

I'm still getting used to the touchscreen and to the little buttons on the keyboard. I'm really good at mashing 2 or 3 at a time. It'd be nice if there were some benefit to that. I have a bag full of accessories I haven't unpacked yet -- one set of new technology to learn at a time is enough for me. I'm also totally good at hanging up on people before we finish talking.

Oh...and one other thing. If this thing is obsolete before I get it figured out...the kitty gets it! 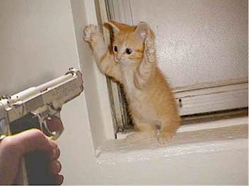 Is it me, or does Nathan's phone look like a Cylon? DUDE: do NOT have sex with it. It will get inside your brain and you will help to nearly destroy the human race. Repeatedly.

That, or HAL. DUDE: make sure you know how to unplug all the memory in case it tries to kill you.

Any other cautionary advice for the man?

WTF? Howcome I didn't get a text? Michelle got a text. What, your damned droid is to fucking good to send me a message?

Frankly, I don't think I could sleep with that thing in the house.

...unless it turns into Tricia Helfer? Because, dude, seriously if Number Six wanted to kill me...I'd let her. Slowly.

What? What were we talking about? Sorry.

I did send you a text. It said WTFBBQ!

(In all fairness, I may have sent it to your landline. Go look at the notepad on the wall next to the kitchen phone and see if anything showed up.)

That's not a phone. A phone has a dial. That's the kind of thing that's going to get all schizo on you at the wrong moment. Like when you're trying to get back into the garage.

A phone is something you pick up and it goes 'Number please' and you answer 'Five' and Jim the Barber answers.

And if you misbehaved with it, it would tell your parents.

Nathan, I'm a bit like previous you (the incarnation where you didn't have a spiffy new phone). My phone does phone. It might do text, but I had that turned off when I found out random strangers could send me messages at $.10 a pop. Do I want to pay for random strangers to send me messages? NO! And my phone doesn't do pics, so I never needed to learn how to send said nonexistant pics anywhere.

Do we have to call you "Buck Rogers" Gendzier now?

So, the most important question is:

Did you put Domino's on the speed dial yet?

Hey -- how come I didn't get a text (whine, whine). Cool phone though.

Nathan, your phone and my phone are cousins. I've got the T-Mobile myTouch, made by HTC with the Google Android OS. I like it quite a bit, though I'm realizing a physical QWERTY keyboard would work better for me - the touchscreen keyboard is nice, but I keep hitting the wrong keys with the fingers on my left hand.

Also, you can always text me if you want. *hint-hint*