It's All About The Ladies.

A few blocks from my house stands this lovely old building. It was built in 1851 from the generosity of John B. Graham, a paint manufacturer and philanthropist of sorts.  Total cost of the building (including the land it sits on) was $29,044.95.  And the purpose of this stately edifice?  It was the home of the ''Brooklyn Society for the Relief of Respectable, Aged, Indigent Females.''

It contained "55 rooms to accommodate 90 old ladies, (called "inmates" at the time), each with a closet; apartments for matron and attendants; eight large pantries and a complete bathroom on the 1st floor;  a chapel and committee room which opened on to one another, and an eight bed hospital, all on the 2nd floor". Admittance to the home was reserved for women over the age of 60 who had lived in Brooklyn or Williamsburg for at least 7 years and had appropriate character references.  The cost for life-long care was $60.00 (approx. $1,800.00 today). 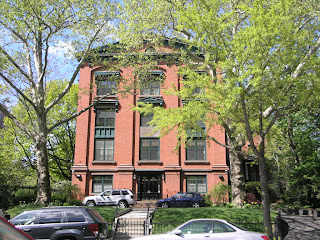 In late 1887, there were of accusations of mistreatment of the old ladies played out in the pages of The Brooklyn Eagle. Dr. Minton, one of the attendant physicians at the Institute was interviewed by the Eagle and claimed to know the accuser well and to consider her a highly moral woman who couldn't possibly be lying, but, nonetheless, he couldn't believe the accusations.  He went on to say that he knew the Matron to have employed harsh methods, but that might be understandable since "old people are worse than school children."  Eventually, the uproar seems to have died away on its own.


I'm only guessing at the reason, but apparently, in 1899, being called "respectable, aged, indigent females" must have taken on a negative connotation, because they changed the name to the "Graham Home For Old Ladies". 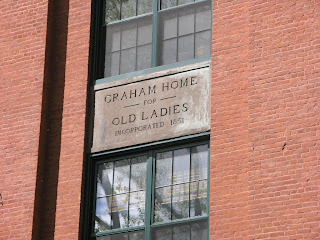 The Institute lasted into the 1960's and the house was briefly vacant until it re-opened as the Bull Shippers Motor Lodge which became notorious as a cheap hotel for prostitution. By 1985, the building was one of the most notorious welfare hotels in the city. "Up to 27 families were temporarily housed in such Gothic squalor that newspaper articles were written about it. Bob Herbert, then with The New York Daily News, described the former home as an ''ancient, soot-black, five-story building that sits back from the avenue and looks dismal enough to have been designed by Edgar Allan Poe.''  The building was, once again, closed down and boarded up in the late 80's.

Ah, back when we could institutionalize people to forget about them. The wonderful world of yesteryear, the golden age.