...Because Sour Grapes Are Just Tacky! 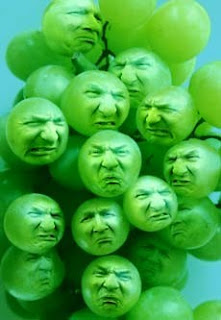 A friend told me I couldn't blog about being all pissy and stuff because I just lost out on a job to some other guy.  That would be beneath me.

Even if the guy is getting the gig because he's the producer's son.

And even if the DGA is supposed to have jurisdiction over Location Managers in New York--but this guy can come from L.A. and work here because the Guild left in an exemption for Teamsters Local 399 members.  (Hey, does that mean I can go to L.A. and drive the Honeywagon?)  But I won't whine about any of that because it would be poor form.

And I probably shouldn't mention that the guy hasn't worked in NY since before the turn of the fucking century. No, that wouldn't be nice of me.  Why should I care that the rules for shooting in NY change and morph so often that I often find myself up a creek when I haven't done a job in the city for more than 3 months.  Nah, he'll get along fine with his 12-years out-of-date experience.

Wait, he was never actually a manager here in New York?  He was a scout and an assistant?  Oh well, I'm sure he'll do just fine.

If I said anything else, that'd just be sour grapes.  And that wouldn't be at all sporting, would it?
Posted by Nathan at 5:55 PM

Snort! Ya amateur! Sour grapes would be calling every one of your contacts that you know will have ANYTHING to do with the shoot and telling them about all the really snotty, backstabby, disrespectful, horrid things this guy has been saying about having to work with them.

I'm so classy and above all that, that I'm gonna pretend I didn't even read that comment.

The producer's son, of course he is the most qualified.