Some Folks Just Give Chiroptera A Bad Name. 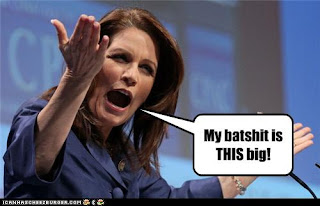 The other day, we got into a fairly extensive conversation about why Michele Bachmann might be classified as "Batshit Crazy".  Well frankly, I kinda took that as a given without any need for further investigation.  And so, apparently, do a lot of other people who do Google Searches.  She features rather prominently in Google's suggestions when you begin by typing "batshit".

But here's the thing.  While it's true that batshit certainly isn't very good for you and under certain conditions it can give you diseases -- even fatal ones -- I can't find anything that ties batshit in with crazyness.  Or any other type of mental defect.  Bats can be cute! 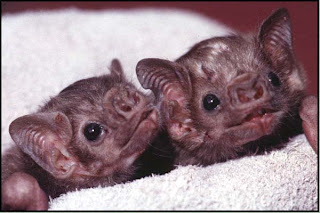 Fairly or not, they take the blame for a lot of stuff.  But I really think we're stretching things a bit when we blame Ms. Bachmann's lunacy on them.

Give the bats a break!
Posted by Nathan at 6:30 PM

And bat shit is actually a very useful substance.

I mean, it can be used to make fertilizer AND gunpowder. How can you go wrong?

I'm tellin' ya...she's getting the better part of this association!

Y'know, you and Phiala make good points, Nathan: batshit, unlike Representative Bachmann, is in fact a useful substance and she benefits from the comparison. Hopefully another difference will be: the importance of batshit had a surprisingly significant influence on world affairs (European nations were willing to go to the brink of war for access to South American guano)--hopefully Rep. Bachmann's influence will be much less notable.

Batshit crazy however is a term I've long heard.

I wonder if anyone's ever gone apeshit on the batshit crazies.

I'm pretty sure apeshit is more like exuberance than batshit. And I'm not all that concerned whether or not apeshit is being maligned.