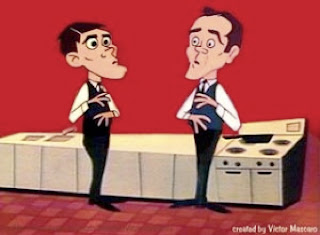 There wasn't anything nefarious going on when Dick Sargent replaced Dick York on Bewitched. Dick, (the first one), had such severe back problems he couldn't work. The important thing is that nobody seemed to notice anything had happened.

Aside:  I renew my invitation to the writers of The Simpsons to pen an episode in which Homer will be replaced by another "actor" and nobody will notice except Lisa.  It'll work best as a secondary plot line. I hereby release them from any and all obligation to me for use of the idea. A teensy-weensy credit would be cool but not absolutely necessary. I just think it would be funny and I want to watch that episode.

Anyway, I think one of my neighbors may have twitched her nose and replaced her husband while I wasn't looking.  I can't remember the last time I heard a certain annoyingly low, know-it-all voice coming across the backyard fences.  I can't remember the last time I saw a certain extremely tall patrician personage flaunting his patrician-ness all over the neighborhood.  The wifely half of the duo is certainly still in evidence, but the man of the house seems to have shrunk by nearly a foot.  And let his hair go black. And modulated his voice by such a magnitude that eavesdropping on him when he's in his(?) backyard has become impossible...as opposed to impossible to avoid.

And I may not pay much attention to their kids, but even if I might not recognize one of them after a few years of unobserved maturation, I doubt any of them grew younger.  There seems to be an added, smaller kid there now.

I'm not accusing anyone of anything villainous; more likely I'm acknowledging my own obliviousness.  How could I have missed such a thing?  In my defense, I mentioned this to Anonymous GF last night and she's observed even less on the mystery than I have.

Moving on from Brooklyn skullduggery to Canadian cunning.  Once upon a time in the not-so-distant past, a fair amount of movies and TV shows were shot in Canada, but pretended they were set in New York or L.A. or other American locales.  This was, of course, to take advantage of cheaper crews, tax credits, and favorable exchange rates.  Those shows, at least made an effort to appear to be in the place they were set.  The police cars looked like NYPD cars.  The uniforms were right.  The streets were realistically dirtied!

Now, those bastards are foisting off shows on us that are not only shot in Canada, but set in Canada!  Rookie Blue and Flashpoint are set in Toronto. The Border deals with Canadian immigration and...uh...border security.  I haven't seen that one, but can someone tell me if Canadians are really losing a lot of sleep over the prospect of mad bombers sneaking into Saskatchewan from North Dakota.  I call FOUL!  It's like they're not even trying anymore.

Last, but not least, let's, for a moment, contemplate the scourge of Sharia Law making inroads to our cherished American way of life.  A bunch of states have been taking this seriously enough to make attempts at outlawing Sharia law in their jurisdictions.  Tennessee, if I'm not mistaken, wants to make it a felony to follow Sharia law in their fine state.

First of all, this is pretty unnecessary. It's not like Sharia can supplant local laws.  Let's suppose (for whatever insane, paranoid reason), that a thief is caught and he gets sent to Sharia court instead of a State criminal court. Yes, I know, but we're supposing here...just like the guys who think Sharia is such a threat to them.  Suppose the Sharia Court finds the thief guilty.  Well guess what.  It's already illegal to cut someone's hands off anywhere in the U.S.  Furthermore, there's no jurisdiction in America where you can blithely stone someone to death for adultery.  I'm pretty sure no court in America will accept "She shamed our family" as a defense for killing your sister or daughter.

Now, since the fear mongers favoring these legislative initiatives aren't likely to back off of their paranoia, let's give self-interest a try.  The use of Sharia in the U.S. is pretty similar to the use of Ecclesiastical courts and Rabbinical Courts.  They're all used to decide religious issues and, at least in Judaism, religious divorces.  An Ecclesiastical court can dismiss a clergyman if he's in conflict with tenets of the church.  A Beit Din validates a Jewish divorce and settle questions of Kashrut, among other things. (Note: In some Orthodox communities, only the man can grant the divorce.  To supersede that issue, NY civil courts require that a divorced couple separate so that the woman can't be a "chained woman".  She may still have problems in a religious sense, but the civil authorities consider her a single woman and force the issue.)

The most common use of religious law in Civil Courts is when a conflict in a religious setting ventures into the Civil Justice System.  Let's say a Synagogue or a Church or...gasp...a Mosque develops a problem amongst its congregation.  Let's say half the members want to split off and form their own institution.  They're all founding members.  They've all got a financial stake since all were paying dues and supporting the institution since its founding.  The court will take religious law into account because it is the de facto applicable contract in the case.

Now let's say Tennessee (or someone else), finally comes up with a law that withstands questions of constitutionality.  By virtue, it seems to me that such a law would have to be neutral with regard to which religious law it was outlawing.  Then, let's say the East Jesus Church of You're Going To Hell finds out that Pastor Billy-Joe BattyBelfry has been buggering men at the I-40 on-ramp of delight.  The church wants to fire him because buggering men is definitely against the tenets of the church.  Pastor Billy-Joe decides to fight his ousting in Civil Court. Things may get complicated.

The church may bring in their copy of the Pastor's Terms of Employment and show the judge where it specifies that the Pastor must live a "clean and holy life in accordance to the ideals cherished" by the Church.  The Judge then asks them to be more specific.  They respond, "He must live according to the Holy Bible".  The Judge asks, "Which one?"  The Church plunks down their version on the bench.  The Judge points out that there are approximately Twenty-Bazillion denominations using the same text and they all have their own interpretations. The judge continues, "Show me the part of his written contract that says he can't have ButtSeks with boys."

In short, if you manage, somehow, to outlaw Sharia, you'd better come up with a really, really, really detailed contract for any situation your church enters into. If your Pastor can be fired for use of "intemperate language", there had better be a comprehensive list of every "shit, piss, fuck..." he's not allowed to utter.  Do you have a problem with him committing "adultery in his heart"?  Leering had better be on the list of no-no's.

Be careful what you wish for.  You may just get a little more than you imagined.
Posted by Nathan at 5:45 PM

The first season of Flashpoint was in an anonymous city that looked exactly like Toronto, but could have been anywhere in North America if you didn't know it was Toronto. Then it was decided that it ws to our benefit for US citizens to begin to understand the society they'd be living in when we took over all of North America so we decided to make all the shows take place in Canada. It'll make the transition easier for you. You're welcome.

BTW, we won't be taking the debt that's why we're allowing you to default on it now.

Calling Newfoundland is kinda like calling Alabama, but if that's what you want you're welcome to it.

Seems the means streets of Atlanta are hosting a myrid of filmings these days as well. Not sure what city we're supposed to be, but we certainly are popular at the moment.

I just wish they wouldn't close multiple lanes of Peachtree Street with production vehicles during morning rush hour when I'm trying to get to WORK!!! (2 days this week!) Yes, I'm thrilled for the Georgia film industry, but a warning sign from the city traffic department BEFORE I made the turn would have been helpful!

I like Flashpoint. But they're even using actors from Canadia. What will they think of next, eh?