The Eye of the Sturm: A Continuation of Irresponsible and Lackluster Irene Reportage

So we went to bed around 4:00 a.m. and got up about 45 minutes ago. I, of course, as the dedicated reporter I am, walked all the way outside (after having my first coffee), and ventured all of 100 yards from my front door. The things I do for you.

As near as I can tell, we're in the eye of what's left of Irene.  It's been downgraded to a Tropical Storm with 60 mph winds.  The news guys are out desperately looking for flooding over their ankles. (OK, I did just see a shot from somewhere out on Long Island with a largish boat floating down a street near a church.)

Here? Not so much.

However,  there is one bit of devastation I must report to you. Y'know that picture I've been using for a while now for my banner? Here, I'll put it up again, so it stays on this post after the banner changes eventually.

Well the background for that is a plywood construction wall around a church down the block from me.  And it's a little bit of a goner. 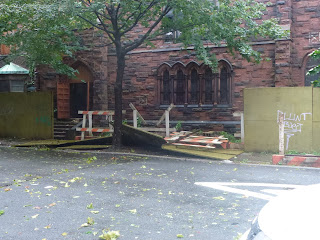 That green is the color it really is.  It' brown on my banner because I own a computer and I'm an Ahtist. 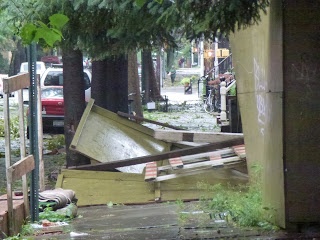 Truth be told, a few months ago we had a wind storm and the whole thing blew down in that one, so Irene's a bit of a fizzle.  At least on my block.

As you may have noted in the first of those two pictures, the front door of the church is wide open.  Come back a little later for some interior shots.  I risked my life for you people!

Update 11:12 a.m. We pause now for a brief impression of Hurricane Irene (disguised as a knight on a castle wall).

Apropos of nothing, here's the inside of that church.  There were about 10 people wandering around taking pictures. 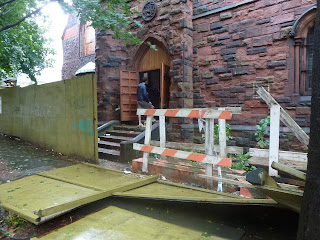 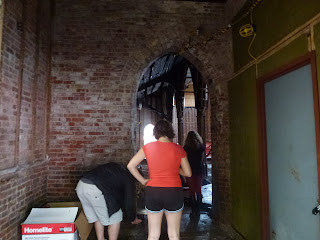 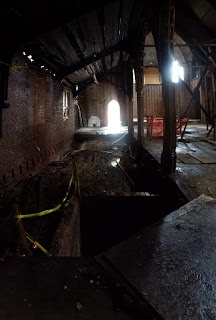 Dedicated reporters don't have coffee first. Just so you know.

I challenge you to find any instance of me claiming dedication!

Dedicated reporters always have coffee first, the 8 AM mill around is an all hands affair involving both on-air and the techs. Not to mention coffee and Danish.

What I took away from this whole thing is that you must have been delirious from lack of sleep to risk your life venturing out into the gentle, dewy breezes. By my calculations, you should STILL be asleep. 4:00 a.m. plus seven or eight, carry the 23, subtract the fact that it's Sunday, and I'd be sawing logs until noon.

dicsiss - I don't know, but it sounds like it should have something to do with Marcus Bachmann

There's totally napping in my future. But the cats started getting pretty insistent around 9:00am.

Yes you did claim dedication. And I quote from the first paragraph of this here post:

I, of course, as the dedicated reporter I am...

I don't think you'd had enough coffee yet when you responded to my comment. Or sleep. Or bacon.

You'll have to decide if I was lying when I said I was dedicated or when I said I'm not. I do think I have a well established history for making shit up.