Polybloggimous: Your Home Of The Most Incomplete Hurricane Irene Tracking Anywhere. 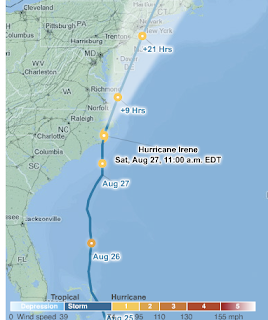 Hurricane Irene is barreling up the East Coast on it's way to visit Polybloggimousville.  As a public service, I intend to keep you all up to date as the storm approaches and let you know how we fare here in Brooklyn.  I'll also offer helpful advice.

First advice:  If you're in an evacuation area, please leave if you haven't already.  Please make sure you take your pets with you.  Please make sure the kids know where the fuse boxes are and how to operate your sump pump.  Assure them that you'll keep in touch as long as cell service is still up.

Here's a screenshot of the evacuation zones including my enviably safe position in it.  With the help of GoogleEarth, I was able to establish that we live 31' above the East River so we should be good with any storm surge.  Let this be a lesson to any of you who invested in backyard bomb shelters.  Next time, instead of going underground, build a bomb tree house. 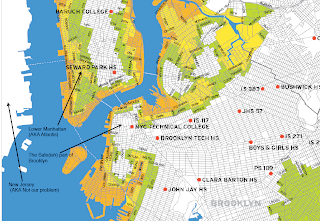 It's currently almost 1:30pm and I've given up paying attention to what time they say the worst of the storm is going to get here.  It was supposed to be around Midnight tonight, but now I think they're saying it'll be more like 7:00am tomorrow.  I'll know when it gets all windy and stuff.

Right now it's dead calm and eerily quiet.  It's raining a bit.  It's a comfortable 73º with 422% humidity. The cats are confused.  They're doing they're usual whining for dinner 5 hours early.

P.S. If anybody is worried, we're well stocked here.  Plenty of Milk Duds and Cheetos. The crunchy kind...not the abominable puffy ones.

Update 2:30 p.m.  Still no weather to speak of, but the potential misery is taking root.  If we lose power, it's not just losing food in the fridge and reading by candle light.  We'd also lose WiFi and Netflix!

Update 2:46 p.m.  Various middle eastern websites are quoting Al-Queda sources as claiming credit for Hurricane Irene and the "impending doom of Coney Island and all of those infidel hot dogs".  Several candidates in the Republican Presidential Primaries were quick to blame President Obama for antagonizing Al-Queda by "killing their number 2 man over and over and over again".  A White House insider, speaking on condition of anonymity said, "Get real.  Hot Dogs are German in origin.   I have no idea why anybody thinks they're so all-fired American. And have you been to Coney Island?  What a dump! Mom and Apple Pie are safely ensconced in an undisclosed location."

Update 4:00 p.m. Mayor Bloomberg and NYPD officials are reaching out to New York's bondage community requesting the loan of some specialized equipment.  "Many of our officers will need to remain deployed throughout the worst of the storm and we hope to lash them securely to various stationary objects at strategic locations."

It's thought that some enthusiasts were eager to provide assistance, but they were tied up with other things at the time and couldn't respond.

Update 5:55 p.m. Just received a text from Irene.  "Stl on t way thr. Hld up a bit n VA. C U l8tr dude."
I don't know about you but I appreciate it when expected guests let you know they're running late.  A very considerate storm, she is.

In other news, our lack of self control means we may work our way through all of our snacks before the storm even gets here. By Midnight, we'll probably be fighting over those nasty puffed rice cakes. The Lord of the Flies will be playing out in Brooklyn. So sad.

Update 6:34 p.m. Undeniable evidence of the Apocalypse: We've just ordered a pizza from Domino's.
Edited to add: I have to admit I like ordering a pizza online and I like the "pizza tracker" even more!  But I just noticed the tracker page offers you the opportunity to "Leave a note of encouragement to the team making your order".  As you'll see from the screenshot below, "Get it right this time, you numskulls" isn't an option.

Update 9:30 p.m.  Guess what?  It's been raining a little bit.  ARRRRGGGGHHHHHH! (Sorry if that bit of panic was unseemly.)
Domino's showed up just on time. The delivery guy called me from his car out front four times.  I had the ringer turned down and I didn't notice.  Then he rang the bell.  He seemed very annoyed with me that I hadn't answered the phone.  Maybe he expected me to come out to his car for my pizza?

Update: 10:30 p.m. Seems like some heavyish rain is arriving.  And they've just announced that the 5 buroughs are under a tornado watch until 5:00 a.m.  Oh, Joy!

Update: 10:45 p.m.  Knock, knock...is this thing on?  I know you're out there. I can hear you breathing.  Actually, a bunch of people are visiting today but you're not talking. You may recall I'm a comment-whore.

In honor of my impending doom, you're invited to tell me the stupidest thing you've ever done in really crappy weather.

Update: 8/28, 12:40 a.m.  Here it cooooomes! (That's meant to be read like the little girl in Poltergeist saying, "They're baaaaack".  I'm not sure I spelled the inflection right.)

It's been pissing rain for a little while now and the wind is starting to kick up impressively.  Considering they've said we won't see the heavy stuff until about 7:00 a.m., this could get exciting.

Update: 2:53 a.m.  Channel 2 is in my neighborhood doing some live coverage.  They just reported a blown (or knocked) over trash can.  I repeat...live coverage of a trash can on it's side sitting in the curb lane of Atlantic Avenue.  Also, the banners outside of P.C. Richard are moving in the wind.  MOVING!
I'll be going to bed soon.
Posted by Nathan at 1:25 PM

The weather panic on TV is amazing, if you didn't listen carefully Thursday you thought a Cat 4 was hitting dead center up Broadway. They actually said Cat 1, but kept talking about Cat 4.

My cat went off in a huff after I wouldn't let her out.

Also watch out for the backlash after the storm passes. Remember, most of your services go underground and below water level. This your sewers. If there is big flooding they may be problem even in non-flooded areas.

(Remember, New Orleans didn't flood when Katrina passed over, but when it moved north into the Mississippi flood plain which drained right threw New Orleans - and that's when the city flooded).

I knew I could count on you for some cheerful thoughts. :)

I figured you'd be too busy eating all those nummy snacks to pay attention to the blog.

Stupidest thing I've ever done in really crappy weather? Drive in a snowstorm where I could hardly see the road, and sometimes not even the hardly part. I've done this a couple of times, although when I started out, I actually could see the road.

And the constant updating wasn't a clue? Remind me not to hire you when I need detective stuff done.

Hmm... driving at normal highway speeds in an ice storm, where the windshield was completely iced over except for a small hole right in front of the driver seat. I was in the left lane, following the trail of people's brake lights in the right lane, and working under the assumption that there really was a road where the brake lights said there was.

I eventually decided that it wasn't the brightest idea to continue going 70mph when I made an involuntary lane change into the right lane.

I was with some friends headed north in Vermont to go skiing once with that kind of road condition. We knew we wouldn't have any problem getting to the bottom of the hill we were on and we didn't give any thought whatsoever to getting up the next one. We ended up sitting at the bottom of the hill for about an hour with traffic backed up behind us and a few other idiots while we all waited for the plow and salt trucks to come through.

Glad to know you're still okay. The way this guy on CNN was warning NYers to stow away their outdoor furniture, I was imagining you bleeding on some wet street corner impaled by a random patio chair leg.

The stupidest thing I said in freezing snowy weather (I don't think I've ever been in really crappy weather, I'm assuming heat waves and earthquakes don't count) was when my friend was driving me through Montreal, after she had been struggling with the poor vision through the ice on her windshield for a while, and waiting for like forever for her to do something about it, finally blurted out "You know, you would actually see better if you turn you wipers on and clean your windshield with some water". Ta-dah!

Stupidest thing I've done in really crappy weather, well I'm from northern Illinois so diving in a blizzard is the norm rather than stupid.

Run stark naked through a thunder storm at night on a golf course with my ex, who was equally naked and thought of the idea. We were both cold sober and not on any drugs, it simply seemed like a good idea at the time.

Nathan, glad we cold be of help.

I always try to cut you some slack since you're afflicted with Ohio-nism.

Oh Nathan, I'm commenting late because I JUST got power back (living in the wilderness smack dab inbetween DC and Balto). I just had to tell you the stupidest thing I maybe ever did in bad weather. My house had a gutter problem with leaves and other crap piling up so that the water would run directly into the basement. Big storm outside, I decide to talk a 4 ft. aluminum ladder and a metal ladle from the kitchen to scoop out the leaves and muck. Well, just as I'm atop the ladder with a great big scoopful of, jesus, I don't even know what, a huge crack of lightening hits really close. I jumped about a foot and threw the muck directly into my own face, fell off the ladder. Nice. Needless to say I ran, quick like a bunny, into the house. I'm probably lucky to be alive. The muck was not tasty.

When standing on a 4' metal ladder during a thunderstorm to clean out your gutters, you're supposed to attach a 6' metal rod to your ladle if you really want to attract lightning. I'm sure there are some prisses out there who'd say you should have climbed onto the roof during nice weather to clean the gutter, but they're clearly idiots. Why would you need clean gutters when it isn't raining?

Glad you got your power back (and delurked).

Oh, I should have mentioned that the gutter in question was above the backyard deck so the 4 ft ladder was high enough. I have no doubt that a metal extension pole would have seemed reasonable to me had I needed it.

Thanks for all the laughs.