The Magician King: Here There Be Monsters. 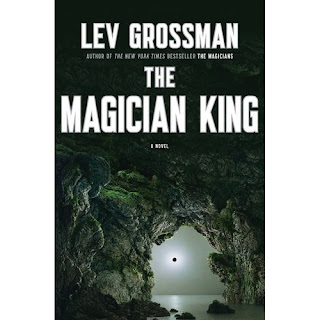 Let's suppose you got your invitation to attend Hogwarts and learn magic.  But let's suppose when you fell off your Quidditch broom, the professors couldn't just put you back together again with a potion..or maybe they just couldn't be bothered.  Because Brakebill's ain't Hogwarts and you'd do well to get that into your pointy little head rather quickly. Sure, you'll come out of it a qualified magician, but some of your classmates will fall along the way -- some in rather horrible and sanguinary ways.

Let's further suppose that after you graduate, you and a few of your classmates decide to skibble off to Narnia.  Only Aslan isn't a good and cuddly Lion always there when you need rescuing; teaching you to be honorable Monarchs.  Because Narnia may be out there somewhere but you've landed in Fillory.  Instead of Aslan, you'll get Ember, a somewhat taciturn ram.  He shows up when he feels like it.  He hands out assignments.  His reasons are his own and who the hell are you to ask, "What's in it for me?"

Lev Grossman's The Magician King continues the story begun in The Magicians and pretty much picks things up right where we left off.  Quentin and his friends have been installed as Fillory's four monarchs and they're leading a charmed, indolent life.  But things in their magic kingdom start behaving in ways they're not supposed to.  Little glitches keep popping up.

Quentin volunteers to go off on a small tax collecting mission and soon finds himself with more mission than he signed up for. By the time he realizes he might have preferred the quiet life, his choices have narrowed considerably. Quentin's story intercuts with flashbacks to Julia's experience picking up magic in a series of safe houses after not being accepted to Brakebill's.  She doesn't get the official sanctioned version of magic; she gets the underground version found in the school of hard knocks, but you get the feeling it may be more effective in some situations.

To add to his heroes' worries, Grossman generously salts his worlds with a cast of Gods to contend with.  They're not New Testament Gods, cajoling with rewards and they're not Old Testament Gods prodding with dire threats.  These are ancient Gods motivated by self interest; mostly not giving a crap about Quentin and his friends -- until they want something from them. And the rewards for heroism aren't always what the story books told you they'd be.

The Magician King makes frequent reference to Fantasy genre conventions and turns them on their heads.  Heroic acts don't get you brass bands and parades, they get you bruised and bloody.  Stepping through mysterious doors doesn't always take you to a land of wonders; sometimes it just gets you into a dull, dim institution.  Grossman's characters aren't likely to describe something as "eldritch"; they're more likely to ask, "Have you ever seen anything so fucking weird?"  Don't forget, Quentin and his friends all come from the contemporary world -- they've all read the same books you have.

If you're the type who devours Fantasy novels, but you find yourself frequently wishing they'd speak some damned English...or maybe you're just a little tired of cuddly, benevolent deities...or maybe you'd just get a kick out of your heroes finding a pot of wooden nickels at the end of the rainbow; then you'll enjoy the hell out of this series.

As a little aside:  I distinctly recall relishing The Lord of The Rings trilogy a few times, beginning when I was about 14 years old.  And I'll admit I always found things beginning to get a bit tedious somewhere in The Return of the King. It always seemed to me that every vestige of humor had left the series and I kept wishing Tolkien would give Frodo a break now and again.  At one point in The Magician King I started to get that sinking feeling that we might be heading that direction and my first thought was, "If this is where we're going, I hope this story wraps up without leaving room for a sequel".  Well, the last page definitely telegraphs another book -- and I'm pissed that I can't read it yet.

Damn you! Another book I must read now. This way I will never be able to finish reading books and have time to do some productive type things.