You Too Can Be A Programming Prodigy.

I've decided I must know as much about programming daytime television as the people who currently make those decisions.  Not that I honestly care all that much about the issue, but something caught my attention recently.  The saga begins with ABC deciding to cancel two of their long-running Soap Operas Daytime Dramas.  I'm guessing that the cast-of-millions must have been the big expense with those shows since they obviously weren't throwing gobs of money at things like production value or scripts.

You may ask, "Nathan, just why is it that you are so familiar with All My Children and One Life to Live"?  Well, that's a two part answer. The first part of the answer is that I happened to be home sick a bunch in 1970. I may have just not wanted to go to school, but Mom bought it.  Regardless, I was on the couch being nursed to health during the debut season of All My Children and I vaguely remember watching it.  Because of the glacial pace of some Daytime Drama storylines, there are some subplots begun that season that have yet to be resolved.  You can miss a ton of episodes without missing much.  The second part of the answer is that Anon GF and I are both freelancers.  There are days when both of us are home and when Anon GF is here, she likes to catch up on those two shows*.  I don't pay all that much attention**.  Frankly, the two shows just run together in my mind -- I'm never sure which one is on; whether one has ended and the next one begun (unless Susan Lucci is on - even I know which one she's on). And with the way characters get married/divorced, murdered/resurrected, born/cloned, etc., it really doesn't mess with the viewing experience all that much to just blend the two into one nonsensical melange.

I don't know what ABC is filling the second hour with, but one show they've announced is The Chew.

It's a Foodie show starring these people... 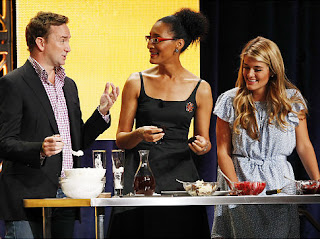 ...and Mario Batali. who will, presumably, wear shorts and orange, plastic shoes! 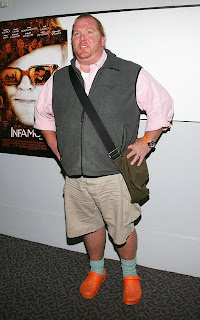 I suppose all of this is my way of saying that the only potential audience-attracting feature The Chew has is that it rhymes with The View!

With that in mind, I have a few suggestions for what ABC can schedule to fill their second open slot. Heck, I'm pretty sure they could just fill their entire daytime schedule with stuff like The Zoo, The Queue, and The Pew.  I haven't taken the time to imagine what those shows would actually be about, but here are some ideas I've fleshed out a bit more.

How about this one? 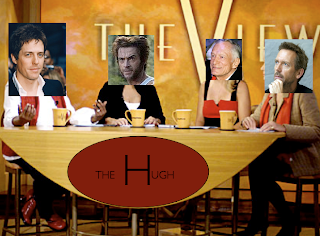 The Hugh! An exciting new panel discussion starring Hugh Grant, Hugh Jackman, Hugh Hefner and Hugh Laurie!  The four of them probably won't get along very well, so this show promises conflict out the wazoo!  And if Jackman gets really pissed off, he may just go all Wolverine on his panel-mates! 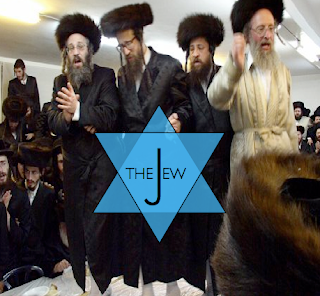 The Jew will be an edgy update of What's My Line, in which a panel of C-list celebrities will try to pick the one real Jew out of a group including two impostors. I'm almost certain Arlene Francis would be happy to rise from the grave to appear.  And there's apparently some question about whether or not she was Jewish, so she could be a panelist or a contestant!  Win-win! 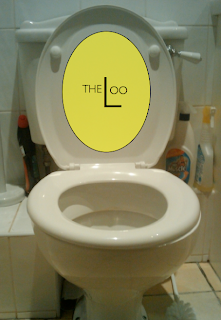 Last, but not least, The Loo will follow the adventures of a quirky Englishman roaming the rural South in his fruitless search for a toilet.

These are sure-fire hits and ABC, you're welcome to them for a nominal fee.  Have your girl call my girl.***


---------------------------
*It probably won't improve your opinion of me to know that when I get to choose the daytime viewing, I opt for the channel that can only afford to show crappy movies like How to Stuff a Wild Bikini, The Beast of Yucca Flats, and Mannequin Two: On the Move.

**In both of our defenses, neither of us really pays much attention to whatever might be on. We're both the type who kinda like the TV on in the background whether we're watching it or not. Sue us.

***Maybe send me an email first to warn me that you'll be calling so I can line up a girl to answer the phone.  Thanks!
Posted by Nathan at 2:39 PM

Pshaw! It's obviously going to be based on the comic Chew!

I'm pretty sure you're giving them more credit than they deserve.

What? You don't want to see Mario Batali eating corpses?

I'd rather see zombies roasting Mario on a rotisserie. (Not all zombies like people-sushi!)

I liked One Life to Live and All My Children. in the late 70s I dated, I think that is the correct euphemism, a lot of actress from that show (plot twists had characters from one show up on the other a lot) and the last woman I dated before my wife was the Tech Manager on All My Children.

As to production values, you try putting out 52 minutes of program 5 days a week, those took a long day when they were 15 minutes long, going to 60 was not easy.

I'm with you on roasting Mario.

Ahhh, '70s All My Children and One Life to Live. Tadd (Michael Knight?) and Jennie, roped me right in. And Vicky/Nicky. One thing I definately remember was a guy who was some kind of orderly or nurse or tech in the hospital. Later when I saw him on regular (non-soap) TV, I said, "I know him!" Turns out it was a very young Tommy Lee Jones.

Yeah, early '70s daytime TV, when I was between college/tech school and the Army.

I'm going to be completely un-PC here, and state that the current programming people should rename the View according to the logic used for your potential replacements. It should be called "The Moo".