I have a habit of watching Who Wants To Be A Millionaire and That Other Game Show Which Shall Remain Nameless (where that guy with the initials "A" and "T" tells three people answers and they have to say the question) and hollering at the screen a lot because, of course, I know all the answers. So every time I see that one of them is having auditions (online or not), I try to get my ass on the show.  O.K., not really every time, but I've taken that online quiz for The Other Game Show Which Shall Remain Nameless a few times and since I've never heard back from them I'll have to assume they were grading from the wrong set of answers.

And once, about 5 years ago, I went in and tried out for Who Wants To Be A Millionaire.  There were about 300 people in an auditorium and they gave us a test in the form of a booklet which kinda made the SAT's seem like a short pop quiz.  On that occasion, I passed the test (with maybe 1/3rd of the other people) and went off to the Interview Segment of the tryout.  I'm not sure what happened to me in the interview.  I sat down with two of their Associate Producers (I assume that's what they were) for about 5 minutes and proceeded to wow them with the fact that I had apparently forgotten how to speak English. This did not impress them and I never heard from them again.

So, yesterday, for no reason I can recall, I went on their website and discovered that they were in the midst of holding auditions for the Fall Season.  I signed up around 12:30 in the afternoon.  I wandered off to do other things.  At 4:00pm, I checked my email and Holy Crap--I discovered that I had to be at ABC for auditions in an hour and a half!  Cool beans, huh?

So I put on a clean shirt (the bluish-green one that shows off my dirt-brown eyes so nicely), and hopped on the subway.

This time, there were maybe 30 people there.  It turns out that they're looking for contestants for both the regular show and for their special Movie Week shows. So I got to take a general trivia test and a movie trivia test.

If you've been hanging out here for any length of time, you may recall that in spite of working on movies and knowing a hell of a lot about how they're made (if I do say so myself), I'm not really good at movie trivia.  I'm pretty sure I couldn't name any of the movies nominated for the last Academy Awards if you pointed a gun at my head.  (Yes, I know that might be a stressful situation in which to come up with movie trivia, but I couldn't do it if you left out the gun and offered me a nice piece of choclolate for the answer either.)

Anyway, when you take the tests, there are 30 questions for each one and they give you one of those old style answer cards (please fill in the box completely with a number two pencil).  The questionnaire comes in a manila envelope (please don't open your envelope until we say to), and -- here's the important part -- there's a random number written on the upper corner of the envelope.  That number is your personal I.D. for the test.  I was utterly distracted by the assumption that I'd forget my I.D. numbers (412 and 78 -- Ta Daaaaaa), and wouldn't get called for an interview even if I did well on either of the tests. (I managed to remember them.)

And two of them were mine.  I passed both tests! I have to admit that when one of the questions involves a maternal hamster and a father who smells of elderberries, the Gods must be smiling on me.

Anyway, I sat down for my interview.  I tried my best to be engaging and energetic. I think they like that sort of thing. Certainly my previous attempt at channeling Marcel Marceau didn't impress anyone.

So now, I have to wait "two or three weeks" to receive a postcard telling me they want me on the show.

Or not. (Receiving a postcard, that is.  I don't think they send you anything to notify you that you sucked and they don't want you anywhere near their studio again.) 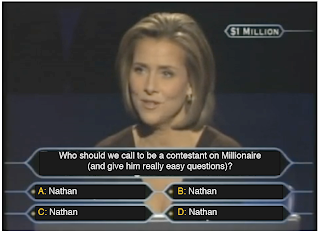 Anyway, let's all keep our fingers crossed. If I get on, you can all root for me to be a big winner.  Or, if you think it'd be more fun, A Beeg Weiner!

BTW, I don't know how far in advance they tape shows, but if I get on, I assume I'll be signing something promising not to talk about my appearance until after it airs.  But we'll have a Super-Sekrit Code.  If I announce that I've actually bought one of these things, you can assume I did pretty well.  But let's keep that just between us, K?
Posted by Nathan at 2:41 PM

May the call be with you.

We all fart in your general direction as a gesture of camaraderie and best wishes!

I tried out for That Other Game Show Which Shall Remain Nameless (where that guy with the initials "A" and "T" tells three people answers and they have to say the question) twice, back before they had the online quiz, when you actually had to go into the studio for the initial quiz. I never did get on it, though.

Best of luck to you!

Perhaps I was too subtle?

Suppose I'm asked "Who starred in Gone with the Wind with Vivien Leigh?" and the possible answers are:

Unless, of course, you're hoping to get me my own slot on the YouTube "Millionaire Wall of Shame".

In which case you're exhibiting cunning, the likes of which have not been seen since Vizzini faced The Man in Black over a wine goblet laced with iocane powder! Never go against a Sicilian when death is on the line!