While I continue to be lazy about actually writing anything, I'll share a few pictures of stuff I've run across in the last week.

Let's start with this unassuming church. This falls into the category of stuff I'm sure has been there a while, but I just don't seem to have ever noticed. 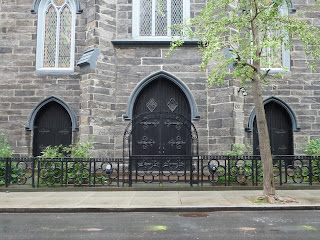 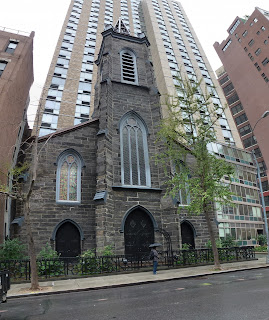 Nothing unusual here, right?  Just a perfectly lovely, if ordinary church.  But what's this? 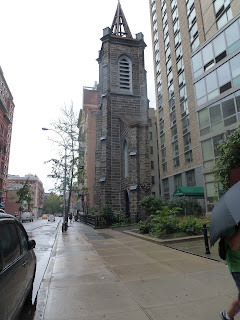 That building behind it (an NYU building) seems awfully close. 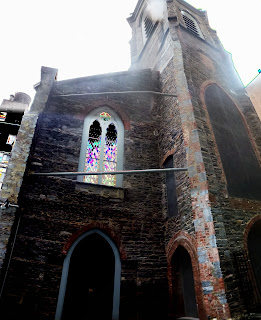 There's no church in that church.  NYU preserved the front wall and the steeple and built their hi-rise behind it!  This gets three polite golf-claps from me.

Next, we've got this item. I'm sure you're all familiar with this famous image. 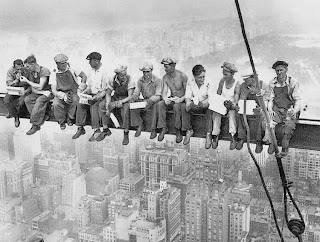 Well, this next thing falls into the category of stuff I've seen a bunch of times and I never get tired of it.  I'm not sure what prompted this guy to create this on his truck, but I like it. 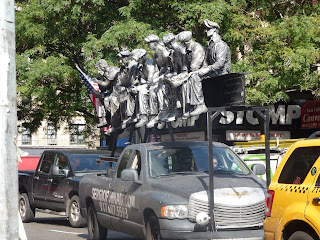 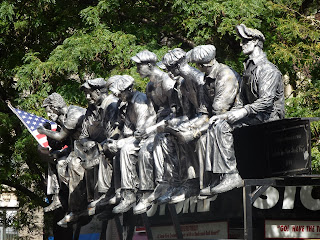 Next, we have a building that I'll forgive myself for never having noticed before.  I'm pretty sure that it endured a number of years with some sort of hokey-crappy facade covering the front. And I know that the last time I spent any time on this block, the front was covered in scaffolding during restoration.  This is a pretty unique building. I'm pretty sure I've never seen a spiral staircase going up the 3 floors on the front of a building. 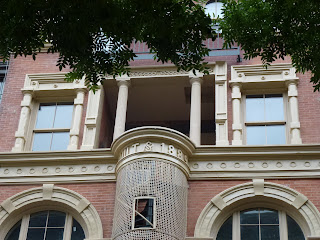 And now, last but not least, is a little photo essay I like to call "Photographer on the Downtown Platform shoots woman on an Uptown Train: Pissed, Pissed-er, Pissed-est." 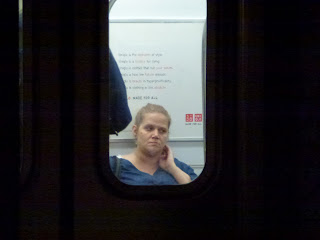 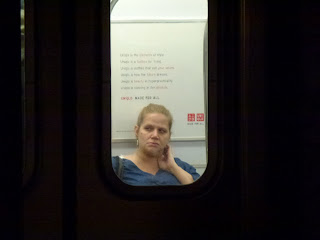 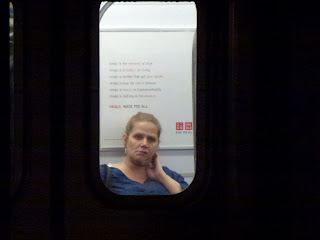 P.S. I thought it was ingenious of me to opt for posting a few pictures I'd already shot instead of going to all the effort of writing something.  It turns out that I forgot to reduce the size of these images, so it took for-fucking-ever to upload them.  Best laid plans and all that.
Posted by Nathan at 11:55 AM

I thought it was ingenious of me to opt for posting a few pictures I'd already shot instead of going to all the effort of writing something. It turns out that I forgot to reduce the size of these images, so it took for-fucking-ever to upload them. Best laid plans and all that.

Yeah, sometimes being lazy bites you in the ass.

Very interesting! The church thing reminds me of an old bank near the hospital. They gutted it, but left the facade, put an iron cage in it, and built residences (apartments, town homes, whatever) coming up out of the facade. I guess it's nice that they preserved the stone front of the old bank.

Well now, doesn't that make you wonder how many other building in NYC are nothing but flat facades?

MY God! The entire city could be one big movie set! You don't know unless you check the back of every building!

What deviltry is this?

There are a lot of building in NY that are only facade, the interior is something else.

There is an old National Guard Engineering unit Armory on W 66th between the park and Columbus. It even looks like the Engineering Castle.

The facade was landmarked, so ABC left it and turned the inside into a very large TV studio.

The Knox Building at 5th and 40th is only a facade, 10 stories tall. It looks like it is freestanding, but up to the 8th floor is connected to a glass skyscraper west of and behind it.

I believe I have walked past that a couple of times, I hadn't caught it was free standing. Son did his Masters (pl) at NYU and I started one.

Jim, there is no New York City. When you go down in the subway, it is noise and vibration while IATSE on the surface changes the set around you.

It's on E. 13th Street. I wasn't paying all that much attention but it's either just west of 3rd Ave or 2nd Ave.

And you're absolutely correct about the subway thing. It's a little known fact, but elevators don't move either. The buildings go up and down around them.

Nathan, the sculpture is advertising for the artist who created it.