No Parking Today Cuz We Made A Park In The Parking Space Where You Usually Park. Park You!

Also known as Kill Some Sod For Nature Day.  Or something.

Honestly, I know they do this every year and I'm pretty sure I knew what it was all about once upon a time.  And I even saw a story online somewhere this morning and I didn't bother to read it.  Because, beyond giving me a bit of fodder for the blog today, I don't really care all that much.

Anyway, here are some miniature parks (made in parking spaces) in my neighborhood today.

The first, you'll find outside of a little dress boutique right around the corner from me.  I could tell they're the ones who put it up because they've also got some matching balloons on their storefront. I do recall that in previous years, these little parks seemed to be put up by random granola eating, Birkenstock wearing, whale saving individuals, not by businesses on the block. But since (as I've acknowledged), I don't remember what it's all for, I won't get all incensed over the commercialization of Soon-To-Be-Dead-Grass-In-The-Street Day. 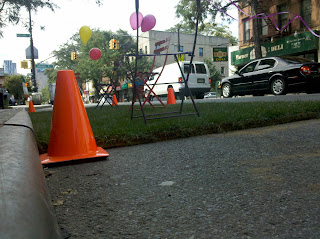 As you continue down Myrtle Avenue (I was headed toward the grocery store, after all), you'll pass that place that magically transforms me into a dick.  And their little park. 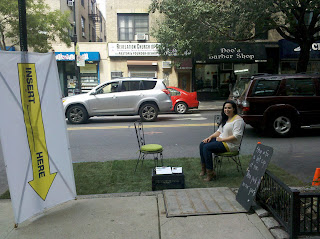 The woman in the picture is not responsible for either of my two previous  forced-to-be-a-dick experiences.  She is, however a perfect demonstration of how this store projects forced-to-be-a-dick rays clear out onto the sidewalk at me. As I walked up, she was standing on the sidewalk holding her clipboard. Here is the transcript of our brief interaction:

Me: Hey, would you mind sitting in your park so I can get a picture?
She: Sure.

As she sits, the forced-to-be-a-dick ray ZAPS me right in the back of the head.

She: (continued) Do you know what this is all about?
Me: Nope.  Don't care.
She: I've got a flyer.
Me: Nope.  Just want a picture.
She: We're giving away free green tea samples inside if you'd like one.

This last was too much. So I shot her.

OK, I didn't turn into that much of a dick, but I did say something neutral-ish and continued on my way.

Lastly, we have one right across the street from the grocery store. Like I said, I don't remember the point of the entire exercise, but I kinda doubt it's about providing extra seating space for restaurants.  Having said that, I don't know if I should give it a break because it was set up by the folks who own a little coffee shop I really like or if I should be all-on-my-high-horse because it was set up by the folks next door who I don't know from a hole in the wall.  It's also possible that they set it up together, in which case I'll just let the voices in my head duke it out. 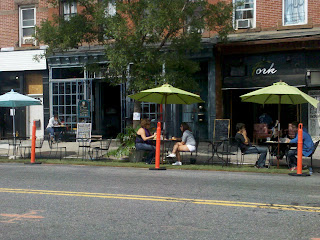 Dick Rays, yep, that explains it.

We need a device for measuring it, like the UV index. The Dick Index, they could announce it on the news, the DI is extremely high in Wasilla Alaska today folks, wear a DickBlock of at least 30DPF.