On June 17th, Brig. Gen. Lori Reynolds assumed command of U.S. Marine Corps Recruit Center, Parris Island. If I'm not mistaken, the Navy is opening up submarine duty to women. Women are serving in roles that, if not actually classified as combat, are only distinguished from combat by some really creative defining of the term. I don't think twice when I see a female NYPD Officer.* I've probably had almost as many women bosses as men. The fact of the matter is that nowadays, the thing that stands out most to me about these "milestones" for women is that I find myself surprised that they are milestones.

With that in mind, I ran across stories in the last few days about a couple of different extraordinary women.  They'd be extraordinary in any era, but their achievements stand out all the more because of when they lived.  But, bearing that in mind, ask yourself if you could have done the things they did. Yeah, I'm lookin' at you, you big macho dudes.**

First up, on August 31st, Betty Skelton died at the age of 85. At the age of 12, she took her first solo flight (illegally).  At the age of 19, in 1946, she performed in her first aerobatics show at the same show where the the Navy's Blue Angels made their debut.  Flying a Pitt Special biplane, one of her signature tricks was to cut a ribbon with the propeller -- while flying inverted 10' off the ground. The first time she attempted the trick, her plane stalled and she managed to right the plane and land on its wheels unscathed.

Twice, she set altitude records for  light aircraft, reaching 29,050' in 1951 in a Piper Cub. It's worth noting that the temperature at that altitude was 53 below zero and she flew barefooted. She also got a P-51 Mustang up to 421 mph, which would have been a women's speed record, but she didn't get credit for it because she didn't land at the same field she took off from.  Her engine exploded at her top speed and she couldn't bail out over Tampa Bay because she remembered, "I can't swim"; so she made a dead stick landing at a nearby Air Force base. 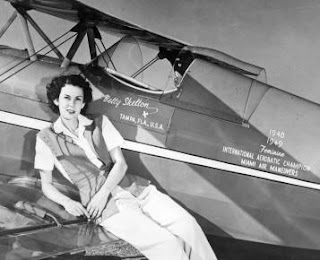 When she was finished with her aerobatics career, she started in on a couple of other careers. In 1954, she became the first woman test driver for the auto industry.  This led to her being an Ad Exec on the Corvette account. In 1957, she was the first woman pace car driver at the Indy 500. Throughout the 50's she set a number of speed and acceleration records at Daytona and the Bonneville Salt Flats. She set records for driving from NY to Los Angeles and also across South America from Buenos Aires to Chile. 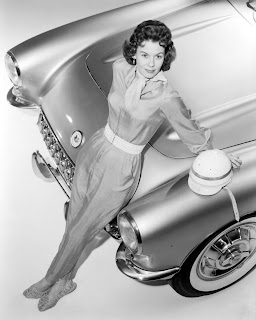 Early in the Space Program, there was an school of thought that said women, due to smaller size and weight, might be better candidates for NASA's Astronaut Program.  Betty Skelton took -- and passed -- exactly the same battery of tests administered to the original Mercury Astronauts. She appeared on the Feb. 2, 1960 cover of Look Magazine wearing a spacesuit with the inside story headlined, “Should a Girl Be First in Space?” 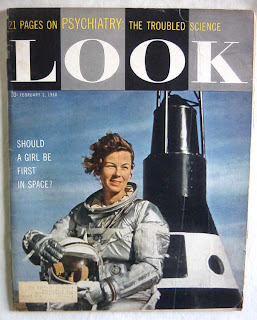 Skelton set her final major land-speed record in 1965, when she topped 315 mph during one run at Bonneville, driving a jet-powered car and wearing no more protective gear than an open-faced helmet and a windbreaker.

Our second badass woman is Nellie Granger.  Nellie was part of the 2nd Class to qualify as Stewardesses for Transcontinental & Western Airways.  She was a registered nurse.  She was 22 years old, weighed 110 lbs. and stood 5'2" tall -- all within the narrow parameters required to have been considered for training in the first place. 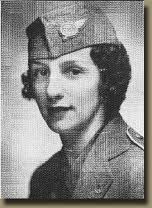 On April 7, 1936, she was the lone Air Hostess on TWA Flight 1, a DC-2 "Sun Racer" traveling from Newark, NJ to Los Angeles with nearly a dozen stops in between.  Headed toward their 2nd stop in Pittsburgh, the pilot flew into low clouds over the Alleghenies and crashed near Uniontown, PA. (An investigation confirmed that radio beacons were functioning properly and judged the crash to be caused by pilot error.)

The pilot, co-pilot and nine of the 11 passengers were killed in the crash.  Granger was thrown clear of the wreckage and when she came to, approximately 125' from the plane, she went back into the flaming fuselage and dragged out the two survivors, Mrs. Meyer Ellenstein, (wife of Newark's Mayor), and Charles Challinor.  Both were severely injured and while Mrs. Ellenstein would recover, Mr. Challinor died the following week from infections that set in.

The crash site was near a mountain top and roughly 4 miles from the nearest road - a fact that Nellie Granger wasn't aware of.  After dragging the two survivors from the plane, she managed to locate a telephone line and followed it 11 miles cross-country through sleet and snow until she reached the first place she could report the crash.  Allegheny County Airport was aware that the plane was missing, but no one knew of the crash until she reached a telephone nearly 4 hours after the crash.

After reporting in, she rode back with a neighbor to lead ambulances to the crash site -- once again, 4 miles from the nearest road.

The stories I got this from contradict each other on some of the details, but I've pieced it together as best I could.  Other than stating that she returned to her job with TWA with a promotion, I can't find anything else about what became of Nellie Granger later in life or how long she lived.

Here are a few links worth reading:

A Time Magazine story from April 20, 1936.
A blog post on Props, Pistons, Old Jets and the Good Ole Days of Flying, created from a number of contemporaneous sources.

**You may take that challenge with a grain of salt since I happen to know that most of the men who read  this "are not now, nor have they ever been" big macho dudes.
Posted by Nathan at 3:13 PM