Yesterday, people gathered in lower Manhattan and Shanksville, PA and in Arlington, VA. Names were read.  Tears were shed. Politicians, past and present, spoke and posed.  The media watched and so did we.  When the ceremonies ended the  somber images were replaced with a couple of NFL games and a World Cup Rugby match between Ireland and the U.S.

That's probably as it should be.

I've mentioned that my grandfather served in World War I. I'd seen a picture of him in uniform, but I have no memory of ever having spoken with him about it. I'm sure it played a large part in molding the man he'd become, but it doesn't seem to have been the defining moment in his life. Other men didn't come home.  Or they came home damaged in obvious or less visible ways.

Nearly 100 years later, I know the broad strokes of America's involvement in World War I and I know some details and dates, but with the exception of some reading I've done or some movies I've seen, World War I is no more real for me than Henry V at Agincourt. A cursory search of the internet will find you stories about High School students who can't identify which countries were allied with which.

For those who lived it, World War I was an occasion for heroism or glory. Or opportunism or barbarity.  There was worry and pain, suffering and relief; mourning and celebration.  For me, and probably for you, it's history.  I'm pretty sure I can find a World War I memorial in practically every town in America, most of them fairly quaint; glorifying all things martial in the fashion of their time.

On December 7, 1941, The Empire of Japan executed a sneak attack on Pearl Harbor, HI.  To my way of thinking, nobody on the ground that day was a combatant. If America was at war already, nobody had told them. My father was 13 years old on that day, living in Florida. I have no memory of him ever speaking about his personal experience of those war years other than how they followed campaigns on maps.  Logic tells me he must have known, or been aware of people who served and didn't come home.  Or came home damaged in obvious or less visible ways.

For me, World War II is more real than World War I. Is it because it's more recent?  Because there's so much surviving documentation?  Because I grew up with movies telling the story from every imaginable angle?  It's still history, but it's history I can process and experience on some level.

But once again, for those who lived it, whether at home or on the front, World War II was an occasion for heroism or glory. Or opportunism or barbarity.  There was worry and pain, suffering and relief; mourning and celebration. In the aftermath, names were read. Tears were shed. Politicians spoke and posed. The media and the public paid attention.

Eventually, there were memorials.  The U.S.S. Arizona lies visible below the surface of Pearl Harbor, a shrine to the sailors still entombed in her; still leaking oil into the surrounding water.  A number of it's survivors have chosen to have their ashes interred there after death.  I've never been there, but even reading about it is a deeply moving experience.  I've never visited Auschwitz but I can't help thinking you'd have to be made of stone to see it and be unmoved.

It was only recently that the National World War II Memorial opened on The Mall in Washington DC.  I recall a controversy when it was revealed that one of the construction firms building the memorial, (a company that had been founded in America in the early 20th century), had financial ties to a German company that had used slave labor during the war.  Personally, I saw that as just one more tangible demonstration of how thoroughly America had won the war. Just a bit more than half a century after the end of WWII, Germany and Japan are two of our most important allies and trading partners.

A cursory search of the internet will find you stories about High School students who can't identify which countries were allied with which. And it's probably easier to spout Nazi propaganda in Topeka than it is in Munich. One of the peculiarities of our system is that you have a Constitutional right to be vile.

Regardless of whether you find that sad, or infuriating, or just pathetic, it's probably as it should be.

My experience of September 11, 2001 took place  2-1/2 miles from the World Trade Center.  The smoke was visible from my rear window. The sounds and smells were present in my living room. I had walked through the Plaza at the World Trade Center three days earlier.  The attacks took place within my personal geography.  But I wasn't there any more than most of you were.  In truth, my experience of September 11, 2001 was closer to that of someone watching events unfold from Chicago than it was to anyone who was there or was worrying about someone who was.

For months afterward, an army of volunteers and City and State and Federal employees worked the site -- first, looking for survivors, any survivors and then searching for remains. Many of them have catastrophic health problems and I'd be amazed if most weren't permanently traumatized by the experience to some degree or another.

Within a month of the attacks, the first U.S. Troops were on the ground in Afghanistan.  A year and a half later, rightly or wrongly, there were troops in Iraq.  Thousands will never come home. Others have come home damaged in obvious or in less visible ways. At present, there's no end in sight to the trauma for these people or the families they leave behind -- or come home to so fundamentally changed.

As a society, we'll fulfill our debt to many of those who acted on our behalf and we'll fail others.  I hope history will look back and decide we made a good faith effort.  But the War on Terrorism will eventually give way to some other conflict, be it hot or cold.

A hundred years from now, whatever shape mass media takes will have human interest stories on the last surviving child born to a 9/11 victim.  A disappointing number of High School students will answer that the Khmer Rouge attacked the World Trade Center and that Shanksville, PA was a Civil War Battlefield where Teddy Roosevelt delivered some speech.  They'll be convinced that the question about an attack on The Pentagon must be a trick question.

In the meantime, Ground Zero doesn't seem to exist anymore.  It's been replaced by a well conceived and executed memorial. And every day it requires less imagination to see the completed new World Trade Center surrounding it.

This is as it should be. 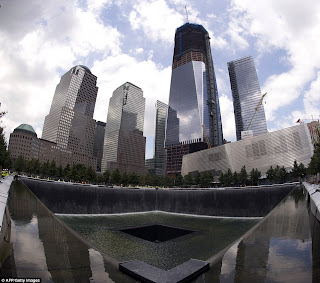 Right now, to visit the site, you need a reservation and they seem to be booked solidly until late October.  I plan to visit before the year ends.   I'm pleased that they decided a traditional memorial combined with resurrecting a vibrant part of lower Manhattan was the right approach; was the right way to pay homage.

And I hope when I visit, there are children chasing each other through the trees with no idea they're anywhere other than a really pretty park.

As a historian, it has always fascinated me how memory transitions over into history. I wonder how long it will take for that to happen in this age of personal media technology. A lot of the transition involves forgetting, glossing over. That's harder to do now.

Excellent job, my friend, and thank you.

Thanks, Nathan. You captured the rhythm of events and memories perfectly.

I was reminded recently that this year is the 150th anniversary of the beginning of the American Civil War. These things seem to be cyclical.

Thank you, Nathan, for your thoughtful words. Well done. :)

Possibly the best commentary on the subject I've yet read.

I'm having trouble with the media re-hash, re-play, show it over and over ratings grab and am ready to let it go. It is time to stop re-living the day and look to the present and future. The memorials are beautiful and serve their purpose with dignity and grace.

Lets help those who still (and maybe will always) need our help, and know that we were all damaged by the barbarism but it's also time to move on. Certainly we can remember without reliving.

Read this yesterday, was speechless. Replayed it in my head. Read it again today. Can't help but feel taken aback by your restrained but palpable underlying emotions.

My favorite sentence: But the War on Terrorism will eventually give way to some other conflict, be it hot or cold.