Holy Shit, I Made Bagels! 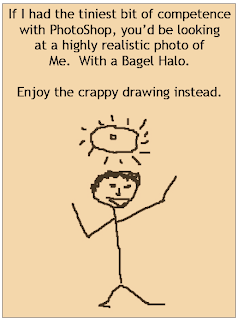 In addition to a non-craptacular picture, you'd also be hearing about 5 seconds of a Celestial Choir singing a beautiful chord in unison. I don't know how to do that either, so join with me for a moment, if you will.

Here's the thing.  There are certain foods that, irrationally, I've always just assumed had to be made by professionals in a professional setting.  I distinctly recall the first time Anon GF said she was making Chinese Food for dinner and I just looked at her and said, "Oh, sure. Like you can do that at home." In my defense, we did not then, nor do we now, have one of those big swinging faucets that reach out over the burners on our stove. 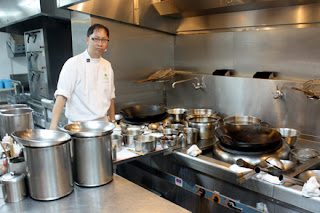 We don't have a wok the size of Nebraska either! In her defense, she just looked at me like I was a mildly retarded child and went on to make Chinese Food for dinner.*

Anyway, for some reason I got it into my head yesterday that I should make bagels.  I looked around at a variety of recipes and chose one that looked like I might be able to handle it.  But let's be honest; I absolutely expected to fuck it up.  Imagine my shock, surprise and near ecstasy when they came out looking like bagels and tasting like bagels.  With the texture of bagels!  A little crunchy on the outside; soft and chewy on the inside.

If you didn't know any better, you'd think they were bagels! And it was really easy.  You should try it.

This recipe makes 8 reasonable sized bagels.  I decided to make 4 of them plain and to get creative with the other 4.  More on this later.  You'll need...

Dissolve the yeast in the warm water until it looks like Lake Erie (ugly and frothy). Add the sugar, salt, and oil.  Mix that in until it dissolves and then sift in the flour.

Mix this all in your mixer with a bread hook just until all of the flour is incorporated. This is where the additional 1/4 cup of warm water comes in. Depending on how dry the mixture seems, you may need to add a bit more moisture. You want to end up with a fairly stiff dough ball that just releases from the mixing bowl -- I think I ended up using an additional couple of tablespoons of water to get it right.

Dump the mixture out onto your counter and knead it for about ten minutes until smooth. If your forearms aren't singing, you aren't doing it right.  Cut the dough into 8 equal parts and let it rest for 20 minutes. 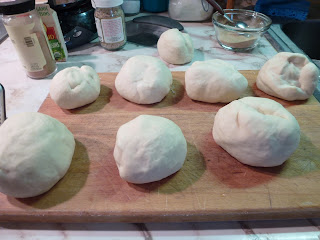 I purposely did my dividing a little sloppy to maintain that "rustic" homemade look. (Also, my name is Elmer J. Fudd; millionaire.  I own a mansion and a yacht.)

When the 20 minutes of resting time is over is a good time to start preheating your oven to 425º.  Also, it's time to form your bagels.  For the plain ones, use two hands to roll out little caterpillars just wider than your two hands next to each other.  Hold one end of the doughy caterpillar in the palm of your hand; Bring the little guy around the back of your hand; and then mooosh the ends together in your palm.  You can roll it up off of your hand like a rubber band and then sorta plump it up before setting it down to rest and rise a little. Also, this is when you should put a big ole pot of water on to boil. (The recipe I used called for plain water.  Others call for a sorta malty brine.  I'll probably play around with this a bit in the future.) 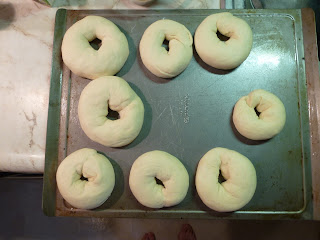 This is where we'll briefly address the topic of getting creative and adding stuff. If you're just putting stuff on the top, you'll wait until after the next step - the boiling. If you're adding other stuff, that goes inside, this is when you do it. Those two bagels on the upper left had the added step of flattening the little dough caterpillar so I could sprinkle in cinnamon and raisins. Then, I pinched them back into cylinders and formed them into bagels. The problem is...other than being the two biggest bagels, I didn't give myself any way of distinguishing them from the plain bagels.  Oh well...surprise bagels are fun.  The one on the bottom left is loaded with garlic.  I'll let you know, but I'm betting that one is a failure since I doubt the garlic got cooked enough and I'm sure it isn't nice and toasty.  Live and learn. 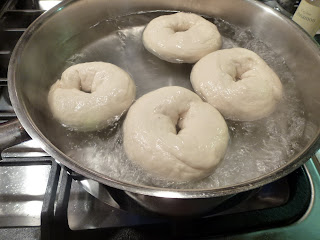 They don't need long; only a minute or so on each side.  The important thing is to make sure your water is boiling decently and that you use a pan with as much surface area as possible.  They'll float, so you really only need a few inches of depth, but you want to be able to boil a few at a time.  A pair of chop sticks are a really good tool for flipping them in the water with a two-handed non-authentic grip.

When it comes time to take them out of the pot, you'll need to find whatever the best tool is in your house.  I tried lifting them out by sticking a chopstick through the middle but that was a mistake.  At this point, they've absorbed some water and, in addition to still being really soft, they're relatively heavy.  The chopstick through the middle is a good way to mess up the shape. 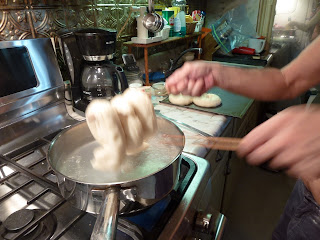 I had more success with a flat hole-y utensil (that I'm sure has a name).  You want to choose something that supports the weight and let's the water drain.  Don't worry about it still being damp or getting a small amount of water on your greased baking pan; the hot oven will deal with that. (Also, if you tried to pat them dry on paper towels, they'd stick and that would be bad.) 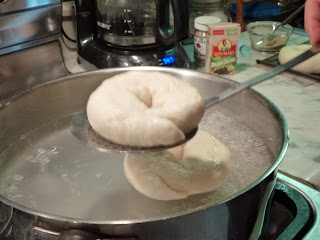 Sorry about the focus on the last two shots; I cook better than I stand still modeling.

If you're adding toppings - seeds or whatever, now's the time. I probably should have waited til this point to add the garlic. 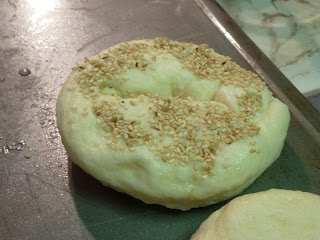 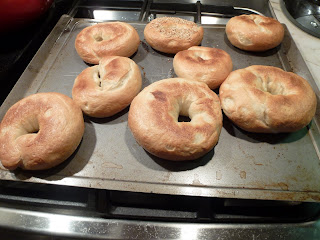 And here are some followup Before & After pics. (Before and after toasting - not eating.  That would be gross.)

The Cinnamon-Raisin ones turned out quite nicely, but I think I could improve my cinnamon and raisin distribution.

The garlic bagel needs work. First of all, since I didn't put any garlic on the surface, there are no visible toasty bits, so I had to sniff and cut open two bagels before I found the bagel one. Even the inside wasn't real obvious visibly.  But it did taste really good.  That's one shredded clove of garlic in that one bagel and it turned out pretty mild and tasty -- not overpoweringly garlicky at all. 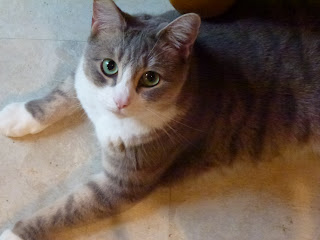 Holy shit! You DID make identifiable bagels on your first try. That's not snark, trust me.

The first few times I tried making pie crust (stinkin' pie crust, fer gods's sake!) it ended up at least once in a big ball thrown across the room in the general direction of the trash and partially stuck on the wall above the garbage basket. That's called 'baking as an aerobic exercise.'

Anyway, congrats on the bagels. They do look good enough to eat, and I imagine by this time at least a couple have given their lives in the name of breakfast. Were they yummy?

Believe me, I've fucked up my share of first (and second and third) tries on baked goods. These really are easy.

And yes, they actually are delicious. The first one we tried warm out of the oven was great and the ones we had this morning (after 1/2 day of storage) were just as good. I'm not sure they'll last long enough to get stale, but I'm sure we'll have at least a sample left to try tomorrow.

My, what feminine arms you have (in the picture). Com'on, fess-up, you didn't really cook the bagels, did you?

Those are my very own girly arms. And if you doubt me, I'll scratch your eyes out!

But if you scratch my eyes out, I won't be able to admire your girly arms, waahhhh!

Bagels turn out to be easy, but they don't really freeze.

I use a Julia Child recipe

Perhaps when it is cooler.

And you boiled them - I'm very impressed.

Well it's not really a bagel if you don't boil it.

To date, the worst thing about the gluten-free diet is no bagels. Yes, gluten-free bagels exist. I tried one. It was awful. Horrible. Nasty. And plain old bad. I may be turned off bagels for life.

Your bagels look great, and I'm salivating down here.