Fair Warning To Cat Burglars. (The ones who are cat-like, not the gangs of nefarious takers-of-cats.)

Every winter, as soon as the first decent snowstorm is predicted, the news is full of stories about people STOCKING UP on supplies, since, obviously, they'll never be able to get out of their front door again.  And even if they could get out the door, when they got to the store, there wouldn't be any BREAD left!*  I, for one, don't get all that freaked out about about the idea of going out in the snow.  I think it's kinda fun.

Heat, however, is an entirely different thing altogether!  We're undergoing another heat wave on the East Coast. I'm not sure the news isn't overdoing it a little bit, but there is a chance that temperatures today will be suitable for melting Iridium. (Look it up if you must, but that's hot!) 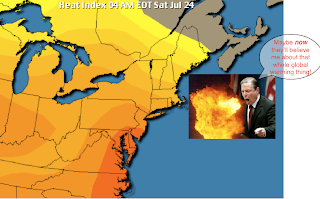 (Look.  It's another one of my really crappy illustrations!)
Well, we're totally prepared here.  We went to the grocery store and stocked up on everything yesterday.**  We have new discs from Netflix. The gist of this is that we may not leave the house again before Monday.  Truth be told, I have no plans to get further than 15' from the air-conditioner aside from sporadic, hastily executed forays to the refrigerator for survival supplies (and frozen smoothies).
So, all of you thieves who follow blogs and Facebook, waiting for someone to announce that they won't be home and that their place is ripe for plunder, you'll just have to keep looking.***  We'll be right here the whole weekend.***
--------------------------------------
*Why are people so concerned about bread?  I never see stories about everyone panicking about the supply of beer and Fritos.  Uh...priorities people?

**There didn't seem to be that "stocking up for the blizzard" rush on the store shelves and there wasn't anybody from Channel 7 News waiting to ask us if we managed to get enough ice before the store ran out. Once again...I just don't understand these people's priorities.  It's like they're from another planet or something.

***I don't know whether or not our neighbor has anything planned, but they're that annoying out-doorsy type, so it might be worth checking them out.  Just sayin'.

****If you are part of a gang of nefarious takers-of-cats, just ring the bell.  Teufel's been bugging the crap out of me since 6:00am.  He might be available.
Posted by Nathan at 10:22 AM

Any time there is a snow/ice storm warning the grocery stores here are mobbed. The South just doesn't deal well with wintry weather.

I'm always amused by the sheer number of people who stock up on more bread and milk than they could use in a month. Not only that, but knowing the power will probably go out, also get vast quantities of frozen pizza AND microwave dinners.

Worse, for warm weather storms, these same folks stock up on the exact same things!! Yeah, the spoiled milk and moldy bread will go real well with the defrosted pizza.

Only time in the last 20 years that type of stockpiling turned out to be justified was the Blizzard of '93. That sucker clobbered the South in a deadly swath from Texas to Georgia and then north to somewhere in the Virginia's. I got lucky, my neighborhood never lost power. Several friends that did lose power couldn't get to my place as streets were impassable with 3-4 feet of snow, downed trees, power lines and abandoned vehicles.

But I digress...back to the heat. Yeah, I live in the South, it gets hot. But not usually this hot and normally not this humid. Worse, the heat was supposed to break a bit this weekend, BUT TS Bonnie's low to the south of us is blocking the "dome of high pressure that is centered over the Eastern half of the country."

Add all that to the fact that I've known since I was a teenager I get heat exhaustion very easily for some reason. I take the proper precautions-water, shade, loose clothing, everything. But I already had one episode getting home a couple weeks ago. Rather not repeat that again if I don't have to.

My fridge is full, I've got books to read and a couple movies I haven't viewed yet, plus I brought a file from work home just in case I get really bored...and maintenance recharged my depleted a/c coolant yesterday.

So...for the 4th or 5th weekend in a row, I'm essentially shut in for the weekend as well. It's just too damn hot to be running around waiting on buses or trains on public transit.

It hit 80 degrees here today so I celebrated by having a chocolate milkshake for dinner. Nothing else; just the milkshake.

Also, I didn't stock up on bread and milk either. I tend to stock up on popsicles, corn chips & guacamole, fruit and iced tea.