How I Managed To Become (Temporarily) Cool.

This post is sorta, kinda by request.  It seems that some of my UCF friends have gotten together in West Virginia.  By all reports, it's been quite eventful.  They've visited Falling Waters, WV (by accident), and then Fallingwater (the Frank Lloyd Wright House they meant to go to in the first place.)  They've argued over the merits and prevalence of IHOPs, Perkins, Waffle House and some other crappy places that really shouldn't elicit such passion, but, well, UCFers can be weird that way.  Today, they went and bought some Fiestaware right there from the factory and they got to see the incomparable mountain-of-shards-too-small-to-even-sell-at-the-factory-seconds Outlet! 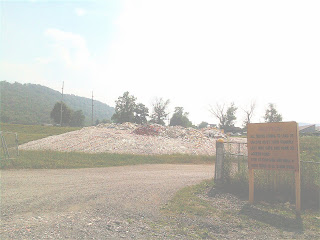 But, by far, the most exciting portion of the get together was when they dragged Vince into a little place to get his ear pierced.  (I'm convinced he got some other stuff done too, but they're all keeping quiet about it.) They called me last night and in spite of the fact that I don't think anyone had been drinking, they sounded drunk as hell. 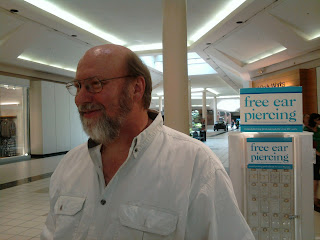 Anyway, although I've retired my uber-coolness, I too, used to be cool just like Vince!  And there was nothing voluntary about it.  Let's step into the WABAC machine, shall we?
The first thing you should know is that I've never been impetuous when it comes to changing my look.  When I was about 11, way back in 1971, I convinced my parents to let me grow my hair long. (It helped that I had older brothers who were already stretching the bounds of hippie-freakdom.)  So, for a number of years, a pair of scissors only approached my hair once...to get my split ends trimmed before my Bar Mitzvah.  In 1976 or so, I started to think maybe I should get a haircut.  I considered the pluses and minuses of cutting my hair very carefully, and then, without warning, I went and got it all cut off...in 1980.  Hey!  These decisions take time!
Anyway, in my early 20's I started thinking I might like a tattoo.  It would be something discrete and tasteful.  By the time I had thought it over carefully, I had reached my late 20's.  And the problem was that by then, everyone else was suddenly getting tattoos...some discrete and tasteful, some less so.  Now, like any young man, the reason to get a tattoo would have been to express my individuality.  With everybody and their mothers getting tattoos, I figured I could be more of an individual by remaining untatted. (It had nothing whatsoever to do with a fear of needles and innate cheapness on my part.  And anyone says different is a dirty, rotten, lying...)
During this same period, I was also thinking about getting my ear pierced.  The first issue to figure out was whether to get the left or the right ear pierced. If you weren't 'of age' in the 80's, you may not recall that the choice of piercing your left vs. your right ear (at least according to urban legend), was a choice of whether or not you were coming out of the closet and announcing your dedication to all things Liza.  Look, I've grown up quite a bit since the 80's, but I don't recall, even then, having been overly homophobic.  But the fact was, I was straight...not that there's anything wrong with that.  And I was still fairly shy and awkward...OK, I was a fucking dork.  I had enough trouble getting a date without having an earring announce I was playing for the other team.  Oddly enough, with this bit of indecision over which ear to pierce, I couldn't find anyone who actually agreed on which ear meant what.  So much for displaying signs that everyone knows.

Cut to 1993.  My skin is unmarked by ink.  I have no holes in any part of my body that I wasn't born with.  I'm in Berkeley, CA working on Made In America, and we're shooting scenes at The African Queen, the store that Whoopi Goldberg's character owns in the movie.  Here, look at a shot of us shooting an interior.*  And yes, those are a carbon arc lights being used...a piece of equipment that throws much more beautiful light than anything regularly in use today. 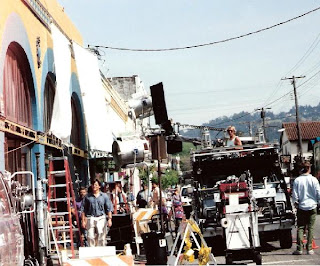 So, anyway, one day we've got the block (the one your looking at) dressed for some exterior scenes. At one point, I was standing around chatting with Annamarie, Richard Benjamin's assistant on the film.  Somehow the topic of my never having gotten around to getting inked or pierced came up.  And then we were finished chatting and we both moved on to other things...or so I thought.
We had the street dressed with a whole bunch of vendors' carts to give it a funky, happening look.  While waiting for the crew to finish an interior scene, I was sitting outside on the curb talking on my cell phone. (Why yes, chatting on a cell phone out on the street  in 1993 was still early enough to qualify me as either really cool or a pretentious dick.)  While I was talking, Annamarie walked up and told me to move the phone to my other ear.  As soon as I did, one of the street vendors took one of those pneumatic piercing guns and shot a little gold stud into my left earlobe.
I have no memory of who I was on the phone with, but all they would have heard for a minute or so was, "Owwwwww! What the fuck was that?  Damn, that hurts!"
I wore an earring for the next 7 or 8 years, and damn, was I stylin'!  (I had one earring that looked like a dolphin leaping through my ear that I especially liked.)  Eventually, the earring must have fallen out one night while I was sleeping and I actually didn't notice for a long enough time that the hole closed up.
And that's the story of my short-lived, temporary cool.
Thanks Annamarie.  (I think) I owe you.
-----------------------------------------------
I had a hell of a time finding any production stills from this show.  Finally, I located a page on H. Tulanian & Sons' website.  They own the shop we took over and re-dressed for the movie.  There's more pics on the linked site.
Posted by Nathan at 9:51 PM

Funny. And cool. And I'm jealous that they called you. Actually not too jealous since I got to see them. :-)

Eric, I believe you've heard this elsewhere, but you do know, you can be replaced.

Who's to say I haven't been already?

It was really Evan responding,not Eric.

Eric, anyone with the balls to go wit me to a restaurant that I picked out - after the stinky tofu incident - is, by definition, cool.

Or just willfully stupid. It may be a tossup.

Nathan, Jeri posted a better picture of the pile o' broken plates on her Flick page.

It was really amazing, and I wish it hadn't been a zillion degrees so I'd have been able to see the pile closer.