Subway Updates -- Of The Cool & The Not-Cool Varieties!

I moved to NY in 1986.  Coming here from Boston, I thought of the NY Subway system as utterly massive.  No offense, Boston, but unless things have changed a whole lot, your subway system has about 63 miles of track (rapid transit and light rail), compared to NY's 660 (not counting another 200 or so miles of service and yard tracks).  And, can you say 24-hour-service?  Uh-uh.

But the point isn't to be bashing Boston's system, it's just to say that when I got to NY, the system seemed incomprehensibly large and confusing.  There are vast stretches of the system I've never ridden, and I'm pretty sure there are a couple of lines I've never been on.  When I got here, it never occurred to me that the city might ever expand the system.

Well, needless to say, over time, first I got used to the trains, lost any sense of intimidation and ultimately became as jaded as any other NYer. (OK, I'll admit that I'm not one of those people who can actually sleep on the trains and somehow miraculously wake up for my stop.  And if you think people are just attuned to the announcements, you've never heard them on most trains -- they sound like the adults in a Peanuts cartoon on a good day.)  By jaded, I mean that I came to lament the fact that there aren't any trains west of 8th Avenue and once you get north of Canal Street, it can be an awfully long walk to any destination on the East Side.  There are very few cross-town trains and those are mostly just a byproduct of the trains having to make their turns toward Brooklyn or Queens -- and, once again, none of them went further west than 8th Avenue. (Yes, there are a lot of crosstown buses, but I can walk faster than most of them travel.)

So, I'm as thrilled as anyone that the system is being expanded.  And here's a little update.

Not-Cool (but not really a big deal):

Not long ago, I  posted some video of the tunnel boring machine working on the new 2nd Avenue Line.  Well, a week or so ago, there were a bunch of apocalyptic headlines about the workers accidentally drilling through the surface of 2nd Avenue -- possibly killing a Papa John's Pizza Store.  After having visions of Godzilla bursting forth from some subterranean lair to terrorize the city, AND DEPRIVE US OF PIZZA, reading the full article revealed that the 22 ft. diameter, 485 ton behemoth was still placidly grinding away 60' or more below ground.  The "hole" in 2nd Avenue was almost 2 inches wide and had been caused by the bit on a long rod that's used to drill testing and pilot holes in advance of the big guy.  Granted, any run-amok drilling in a city that has multiple layers of intersecting infrastructure underground isn't exactly an optimal situation, but it wasn't really quite the same thing as a hole the size of a house either. 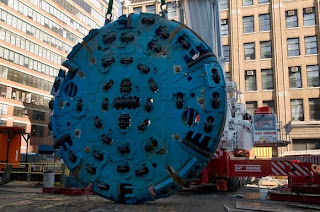 Not-Cool:
The air-conditioning on most subway trains works just fine, thank you very much.  But the system is not air-conditioned.  Every local news outlet does at least one story each year about how unbearably hot the subway stations are.  If I remember correctly, Union Square usually wins, topping out at about 117º or so.  Since we're going through our second heat wave in as many weeks, I'm surprised I haven't seen this year's crop yet.  I hate waiting on sweltering subway platforms as much as the next guy, (OK, maybe not as much as the poor schmucks who have to wear a suit to work), but on this one, I'll cut the MTA some slack.  First of all, the system started operating in 1904 and the state of the art for ventilation consisted of sidewalk grates. 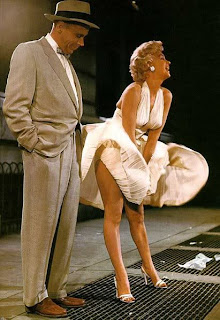 As you can see, they work really well for somethings, but not so much for actually cooling the system down.  The other thing to bear in mind is that the air-conditioners on subways work pretty much like air-conditioners everywhere -- they suck in air and cool it, while blowing out hot air.  That hot air gets blown into the tunnels, and the trains push lots of that hot air into the stations.  And everything else about the operating the trains causes heat too -- brakes engaging, the friction of steel wheels on steel rails, 12 bazillion people exhaling -- stupid breathing people!  Anyway, I imagine the system will eventually get enclosed and air-conditioned -- and I'll get my flying car and win the lottery.
Ultra Cool:
I didn't mention that in addition to building the new line running down 2nd Avenue, they're also expanding the 7 Line beyond 8th Avenue, crosstown to Eleventh.  Eventually, they're expecting to expand it further to go up or down (or both?) along Eleventh Avenue.  I can probably count on one hand the number of times I really cared about having a good cross-town route on that section of 34th Street, but hey, it's a step in the right direction. 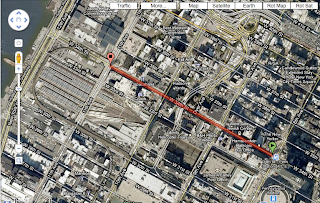 Hey, it's a half mile from 8th Avenue to 11th -- that's gonna save somebody some shoe leather and sweat.  And the cool part is that they broke through to where they've been digging the Eleventh Avenue Station this week.  And the video is pretty damned cool! (You have to bear with about 30 seconds of Mayor Bloomberg's lovely mug before you get to the cool stuff.)
Ultimate Should Be Cool, But Still Not-Cool Subway News:
If you follow Consumerist, you'll know that for years, Subway Sandwich Shops have been tossing cheese on sandwiches willy-nilly, with no thought whatsoever as to random cheese-overlap vs. proper cheese distribution!  Well, way back on June 1st, Subway announced that Worldwide Cheese Tessellation would be their official policy as of July 1st, 2010. 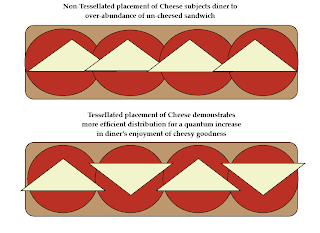 Surely, I can't be the only one who rejoiced at this proclamation. No more would I risk over-cheesing in one bite and utter cheeseless-ness in the next!
Well, I'm truly crestfallen to announce that two days ago, on July 15th, I visited my local Subway (400 Myrtle Avenue, Brooklyn, NY 11205), and they have not yet instituted Subway's highly anticipated tessellation reforms. I've yet to convince their sandwich artists that the meat slices can reach from one end of the bread all the way to the other, so I don't think I'm prepared to take on the science of tessellation with them.  I can only hope and yearn for the day when the Corporate Vice President in Charge of Cheese Tessellation pays a visit and holds the requisite training seminar.  Until then, I'll just have to make do with being surprised with what comes in each bite. Except for the last 3/4" of sandwich -- that's always just bread and escaped condiments.
Posted by Nathan at 1:06 PM

Last summer there were public hearings on service cuts on MARTA, Atlanta's public transit system. It was during a really steamy hot spell.

The comment that got the biggest reaction from the crowd was NOT about the pending serice cuts, but about how MARTA had giant fans near the station entrances for the employees, but nothing on the platforms for the stiffling & fainting passengers.

Within a week, every underground station had several massive 4' industrial fans moving the air. This year MARTA didn't wait for complaints, the fans went in a couple days after our first spring heat wave hit. Granted the fans are chained down this year to prevent thefts, but we at least have air movement!

I think there used to be fans in the subways...like in the 50's? Anyway, we now depend on the wind generated by trains going through the tunnels. It works on the same principle as a convection oven.

Oh, we get that too. Feels great if both trains come into the station at the same time and I'm standing about mid-platform!

But NY vs Boston in Pub Trans? Mass fail!