Today, Jeri posted a picture of Miles looking all adorable and stuff.  Here's the picture I totally stole from her blog. 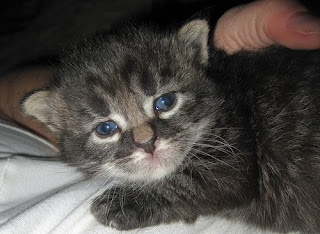 I just challenge you to look at that cute kitten face and not melt into a puddle of "Awwwwww"!  Well, hey!  LuLu was a kitten once too.  She was adorable and awwwwww-inspiring.  Don't remember?  Just look at her here in her "I'm a kitten and everything I do is cute and I only weigh like a pound, so how much damage could I do when cute equals mischievous" stage. 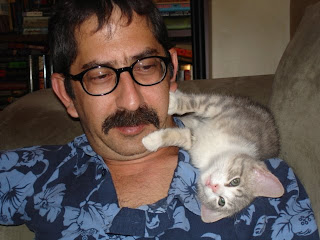 I told you!  Awwwwwwww!
Well, here's the thing. Kittens grow up to be Cats.  And most of the time, that's fine.  But sometimes, they make you wonder whether or not there's an option to just rent kittens until they start getting big and then trade them in for a new tiny little ball of "oh-so-precious"?

Here's a picture of the little LuLu and Teufel from just a little more than a month ago. 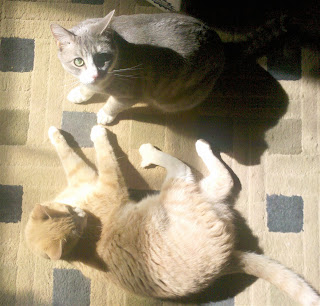 Now, I'll be the first to admit that there's something especially cute and playful about the kitties in this picture.  But if you look at the expression on LuLu's face, you'll have to acknowledge that something else might come to mind.  "I wonder what the hell she's been up to".  " I wonder if she and Teufel are just rehearsing some evil deed."  " I wonder if they're actually plotting our demise." These are just a few of the thoughts that might come to mind.
So let's cut to yesterday morning.  It was something like 5:00 a.m., so GF and I were going about our usual 5:00 a.m. routine; we were dead to the world asleep.  Until a furry projectile came flying up from the foot of the bed.  LuLu!  I think there must have been some claws involved as she used my left foot as a launching point because I started to sit up rather suddenly in surprise.
For the rest of this to truly make sense, you should be aware that for the last couple of years, Widget has been on a diet.  Every time we fed the beasts, we had to close Widget in the bathroom with her bowl of "Fat-Cat Food" so she'd get a chance to eat it before LuLu and Teufel shoved her aside.  At a recent visit to the vet, we were told that LuLu was tipping the scales at 13 lbs. and that she, too, should be getting the diet food.  Fine!  Now, we'd just feed all three of them the same stuff together in the kitchen. (Teufel is apparently the weight he's supposed to be, but he'll just have to eat more than the other guys.  We have faith in him.)  The point of all this is that LuLu has developed some serious mass.  And she's capable of generating amazing bursts of velocity in very short spaces.
And there's some mathematical formulas that discuss mass and velocity and stuff like that, but all I know is that when LuLu manages to get her 13 lbs. up to 48.7 MPH in the space of 4 feet, and then she rams her head into your suddenly startled elbow...it hurts!  And I'm still not sure if the next chain in this little action scene involved my elbow or LuLu's deflected head, but my startled "ouch" was followed by an even more startled "ouch" from GF, who sat up holding her eye and said, "Man! That's gonna leave a mark!"
Well, we managed to discover that our injuries were bearable and, since it was FIVE IN THE FREAKIN' MORNING, we rolled over and went back to sleep.
For a few minutes.  Maybe ten minutes later, LuLu set off to find and kill some imaginary intruder regardless of where the chase might take her.  So, she came charging across the bedroom and leaped straight from the floor, and managed a perfect landing of all her mass and velocity into the tiniest space her two front paws could hit -- which just happened to be on my cojones. I don't know why, but the phrase "ball-peen hammer" keeps popping into my head.
At this point, going back to sleep wasn't really an option.  Even if I hadn't been in a fair amount of pain, I would have been terrified of whatever else she was plotting.  And I know there was malice aforethought involved.  Nobody's aim is that good by accident, and I don't care what America's Funniest Home Videos might want you to believe.
I'm really not sure what the point of all this is, but if it influences someone to start up that Kitten Rental business, I'll be first in line to patronize their venture.
Posted by Nathan at 12:15 AM

You know - if we could keep children small and cute that'd be good too. Bonus - no college expenses! Or weddings! Or shotgun weddings! There's SF written about eternal children, even.

Thanks for giving little Miles a few more minutes of limelight. He deserves it. :)

So happy that my cats don't annoy me until they hear me moving in the morning (unless they're super-hungry). Granted, that sometimes means that Matisse is right in my face and staring at me until I open my eyes - at which point the "I'm hungry!" meowing will start. But he (and the other two) do keep quiet until then. Probably because, when they were younger and not dependent on set feeding times due to available dry food and not needing medication, if they disturbed me before I was ready to get up, I'd put them in the hall and close the door with a towel protecting the carpet, then go back to sleep. They learned pretty quickly not to wake me up.

I just wish kitten-y BJ and Edison had learned that before they chased each other cross my barely awake open eyes.

Yeah, yeah...you don't know what fear is until you wake up from a dead sleep to see the silhouette of a full grown 90 lb german shepard hurtling through the air towards your bed from the doorway 10 feet away.

After a close lightening strike/crash of thunder.

Never knew how she did it. Perfect 4-point landing smack in the middle of the bed. Ouch from two people in the bed.

Miles looks like my Atticus...who is looking for a home..cause i am too young to be the Crazy Cat lady right now. Our kittens are cuddly but I think that is only so we fall for them and keep them. Kind of a survival method. MUST RESIST.

Heh - Pippin (Zach's cat) and Luna (black/white kitten) are going w/ B&Z & Ashley to their apartment. Willow is going back to Ashley's mom. I get my choice of Miles or Strider for my new condo - or possibly both. LOL