I'm So Annoyed I Just Don't Have The Energy To Quantify It.

I've had a couple of posts rolling around in my brain and I haven't had the energy to put together a coherent post about either of them.

One of them is about all of the Anti-Immigrant chest thumping that's been going on.  I don't know about you, but I doubt that the most vocal voices we're hearing really differentiate between Illegal immigrants and legal ones.  Most of the things I hear seem to represent a deep resentment of anyone being let into the country right now.

The other is all of the Islamophobia going on in my own back yard.  I expect that kind of thing from the deep South and from much of the middle of the country, but NYC is supposed to be representative of the country's melting pot.  And, once again, the arguments are completely disingenuous.

If you haven't been paying attention, there's a very noisy crowd trying to stop an Islamic Cultural Center from being built right there at Ground Zero!  Well, first of all, it's not really right there; it's two blocks away and even at it's full planned height, it won't be visible from Ground Zero, since it will be hidden by taller buildings.  Protesters claim "it's like removing the U.S.S. Arizona and putting up a monument to the Kamikazes who sank it in it's place."  Uh...it's really not like that at all.  It might be similar to having a Shinto Temple within shouting distance of the Arizona, but while most Kamikazes were Shinto, I'm not at all convinced that all Shinto were Kamikazes.  Oh, well.

The Community Board, which has a say in what new buildings can go up, approved the Cultural Center a few months ago.  The protesters then demanded that the building that currently stands there, an 1857 edifice most recently occupied by Burlington Coat Factory, should receive Landmark Status, so yesterday there was a meeting of the Landmarks Commission to consider the question.

I'm not aware of anyone in the architectural community who thinks there's anything about the building that warrants preservation.  And if that wasn't enough, the meeting remained on topic (the building's significance), for about ten minutes before members of the public started in on "They're going to kill us all and we're letting them".  Yup, it's all about saving the Burlington Coat Factory Building from rampant development.

Rick Lazio, who will be running as a Republican in the next NYS Gubernatorial Election has demanded that Andrew Cuomo (the current state Attorney General and his likely Democratic opponent), investigate the financing behind the project.  To my knowledge, Cuomo hasn't responded at all, and Mayor Bloomberg said something along the lines of "I don't think we ought to make a habit of investigating every religious group's finances without some evidence of wrong doing."

And lest you think this is only about building a mosque so close to Ground Zero,  you might wonder, then, how far away would be far enough?  Apparently Sheepshead Bay in Brooklyn (about as far as you can get without stepping into the Atlantic), is too close.  A proposed mosque there is being valiantly protested.  Or maybe if you have to cross another bridge and go all the way out to Staten Island.  Is that far enough?  Nope!  They're protesting that one too.  I think my favorite sentiment, and I'm paraphrasing here, was the old lady who said, "I know they have to pray somewhere, but why here?  I just don't think it's appropriate in a residential neighborhood."

So I guess I'm feeling all proud and patriotic right now...like this guy that Diane Arbus photographed. 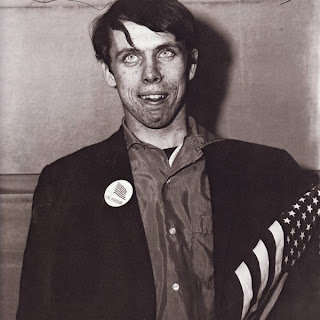 I kinda hate to say it, but the guy in the Arbus photo looks like he's about to drop the flag and make a lunge for her sweet, delicious, nommy braaaaaaaaainz.