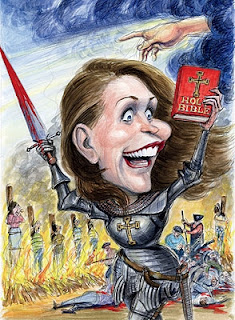 OK, I can't figure this one out.

A couple of days ago, the NY Post ran a story by Josh Margolin; 'Jewish' Bachmann is costing Romney.  In short, (if you can't be bothered to read the already short Post article), there's a supposed tizzy because orthodox Jews are donating to Bachmann's campaign in the mistaken impression that she's Jewish.  As Eric Wemple points out in the Washington Post, every other story, report and blog post on the subject, refers back to the NY Post story as its source and the NY Post story is, to put it mildly, light on attribution.

A little anecdotal background first - and you can translate "anecdotal" to mean "Nathan's gonna pull info out of his ass instead of citing any actual facts": In spite of the (correct) perception that Jews generally support liberal candidates, Ultra Orthodox Jews tend to vote Ultra Conservative.  I don't mean to generalize - (and you can translate that to mean "Nathan's about to generalize for all he's worth") - Hassids are to Judaism as Evangelicals are to Christianity.  They believe they are the exclusive recipients of the real Word of God and everyone else, other Hassidic sects included, are  blasphemous heretics.* The major difference, as far as I can tell, is that Evangelicals feel compelled to recruit everyone else to their beliefs in the hope of saving them, and Hassids don't give a rat's ass if everything you believe is wrong as long as you leave them alone.

But while I may disagree with Hassids on - uh - basically everything, I don't think they're stupid.  Hassids purposely keep to  themselves as a community, but they don't live under a rock.  The idea that they might think Bachmann is Jewish because of a vaguely Jewish sounding name is, well, almost as batshit crazy as Bachmann is.  The more likely scenario is that if anyone (attributable, at least), were claiming she was Jewish, Hassids would be falling all over themselves to prove she isn't. (You may have to scroll down on that link. There's a humongous ad at the top of the page.)  But it's not like she's been shy about her religious affiliation.  If she could, she'd be trotting out the results of Jesus' most recent colonoscopy -- that she administered personally.

Just for the hell of it, here are some other people whose names could be perceived as Jewish -- if you're a fucking idiot:

Which all leads me to the conclusion that someone, somewhere, thinks this helps someone or hurts someone else.  I just can't figure out who.  Is it supposed to somehow tarnish Bachmann's rep among Evangelicals by tarring her as a Hebe?  Yeah, I don't see that gaining much traction.  Is it supposed to plant the idea that she's Jewish and gin up** support?  Again, unlikely. Her stated support of Israel is a better selling point to that target audience and it actually exists.

I'm way too naive to figure out what this little contretemps intends to achieve, so I'm hoping you guys can explain it to me. Conspiracy theorist (and this is a one time offer), are most welcome to chime in.  This one has to be Byzantine as hell in its logic.

*Disclaimer: When I worked on this movie a couple of years ago, I knew I'd have more direct dealings with the Hassidic community than I'd ever had before and while I didn't expect them to embrace the movie I also didn't expect them to have any great objection to it; it's a fairly light bit of fluff.  And I was right in that assumption, at least in one community.  I met with somebody as far up the food chain as you can get within one of the major sects and the gist of his reaction was that the movie got a couple of things wrong but it wasn't particularly offensive.  If we made changes, his community would cooperate actively; if not, they wouldn't stand in our way, but they wouldn't help. Since most directors don't even like the people footing the bills butting in with suggestions, we said "Thanks, but no thanks".

The thing that surprised me was that I kinda expected to come away with a better understanding of Hassids.  I figured I'd experience a bit of "to know them is to love them".  Instead, without going into detail, I'd have to say that familiarity bred contempt.  Let's just say I didn't discover some deep seated sense of kinship and we'll leave it at that.

**As sometimes happens, I just found myself using a word or phrase that I'm totally familiar with, but found myself thinking "Where the hell does that one come from"?  So I looked it up thinking I'd find that it came from some meaning of creating with an "engine" (as in cotton gin).  Imagine my surprise when I discovered that it comes from "ginger up" implying a way to "spice up" or "excite" -- the cited usage being a prohibition against putting "...ginger up a horse's fundament..." as a means of making it appear more lively to a prospective buyer.  Ain't etymology wonderful?

My experience in Rockland is that they vote for who ever they are told to vote for and that is often a Democrat.

Clinton's last pardons pardoned two thieves, we are talking millions, and the communities turned out enmass for Hillary.

How dare you contradict my generalization with specifics!