Hey Kids! Guess who was in town today?

Yup! Those warm and fuzzy folks from the Westboro Baptist Church! They spent the day running around Manhattan and then paid a visit to Brooklyn Technical High School...a mere 8 blocks or so from my house! I honestly wasn't sure why they decided to go to Brooklyn Tech, but here's the text from WBC's website with their schedule of events. 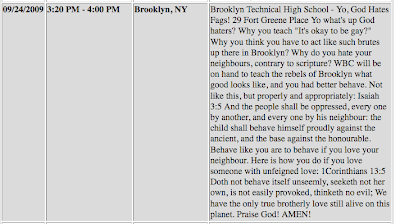 Whatever. Hey, the thing is, I couldn't have them showing up in my own nabe without going to take a look. So, I got my ass down to Brooklyn Tech by 3:00 p.m. meaning to get a good seat. Here's what things looked like at 3:00 p.m.

OK, there's a bunch of students hanging out across the street by the park waiting for the idiots to show up. 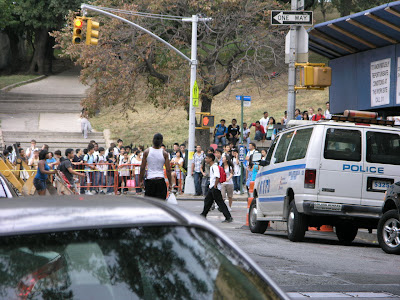 Ft. Greene Place (where the demonstration was scheduled) is strangely tranquil. (That huge 6 or 7 story building on the left is Brooklyn Tech. I think there's a couple of thousand students who go there from all over the five boroughs.) 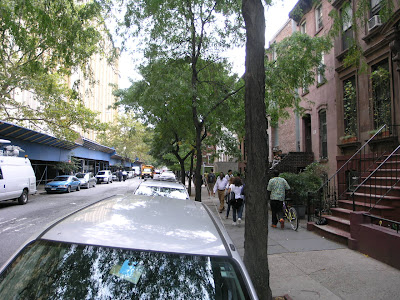 The organized counter demonstrators begin to arrive around 3:15. 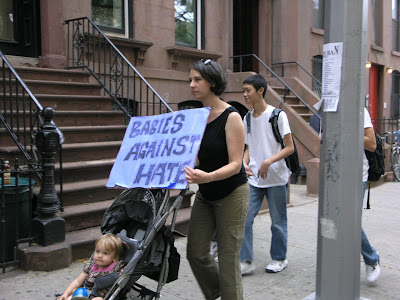 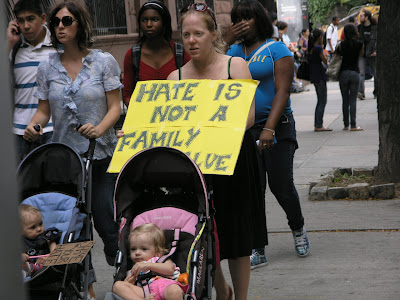 But at 3:20, there still wasn't any sign of the WBC schmucks! 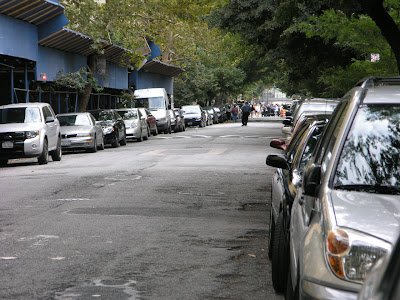 I have to tell you. At this point, I was getting sincerely pissed! I expect punctuality from my hatemongers. If a bunch of assholes say they're going to be somewhere at 3:20pm, they'd damned well better fucking be there at 3:20 p.m. I'm a busy guy.

Well, see...here's the thing. Maybe they were on time. But they went to the wrong fucking place!
Here's a handy map for clarification. 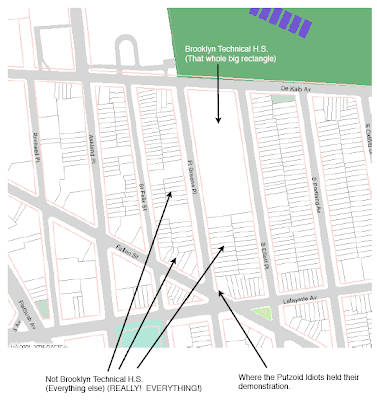 They missed the school by a 1/2 a block! Why? Well, I guess they're just incompetent.

How are they incompetent? Let me count the ways.

-They scheduled their demonstration to begin approximately 40 minutes after the students get to go home. (If you're on the sidewalk when school gets out, you learn how salmon feel trying to swim upstream to spawn. The 4 blocks between the school and the subway are a solid mass of youthful hormones and acne twice-a-day before and after school.)

-They were late. (Clearly, they need help with navigating NYC traffic, or at least knowing how long it takes to get from one place to another.)

-They missed their scheduled protest spot...and this may be my favorite part of the whole thing. Ya'see...as they were about to turn the corner onto Ft. Greene Place, they must have seen the barricades and caution tape set up on the corners. And with their massive inbred brainpower firing on all 3 synapses...they decided, Oh, this must be the designated Putz Pen!

I guess they didn't notice the construction guys. See, the barricades were there because the curbs and the sidewalk were being re-built.

Never mind...they went to the wrong spot and made all of us Brooklynites hike a block further out of our way to giggle at them. Inconsiderate bastards!

Oh, did I mention there were only 5 of them? And maybe 12 cops who looked like they really wished they were somewhere else? And about 200 students who hung around to watch them? And don't forget the baby brigade!

I honestly don't know if anyone on either side was yelling anything. Fulton Street (where they staged their demonstration) has so much traffic noise that you could land a division of Marines a block away in helicopters without noticing there was anything going on. It was pretty pathetic!

Here's some pics of the grand Hoo-Ha! (Note the hardhat in the middle of the first picture trying to figure out if he's going to be able to knock off work by 4:00 pm, like he's supposed to.) 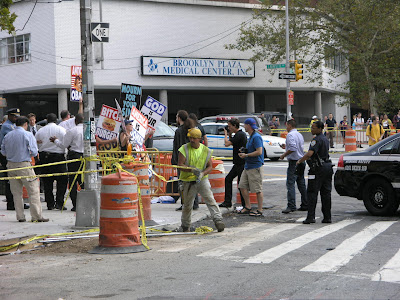 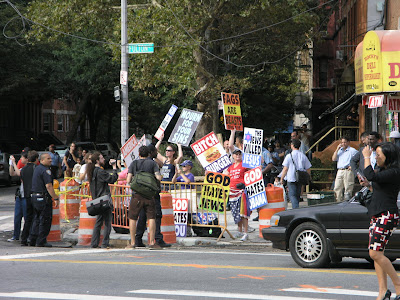 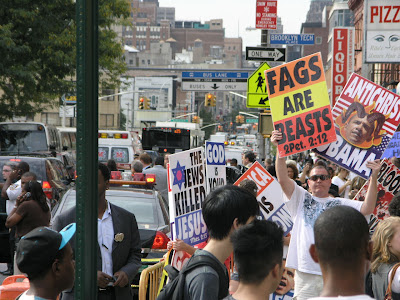 The baby counter-demonstrators do themselves proud! 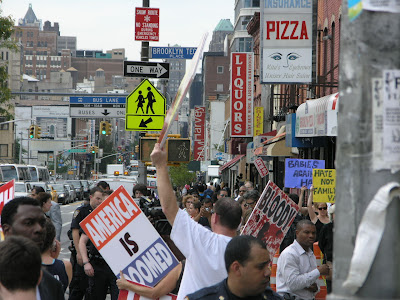 Am I supposed to pick up milk or bread on the way home? I'll get beer. Beer's always good. 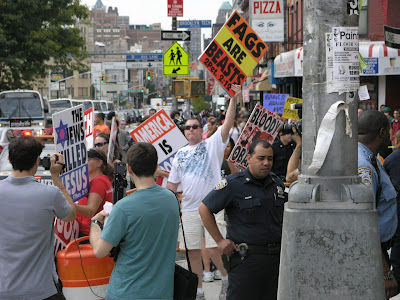 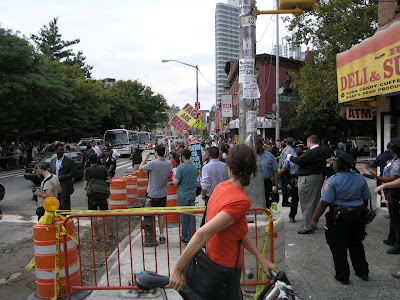 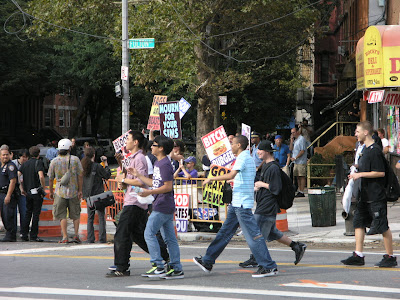 Why couldn't they send me to a riot...or something interesting? 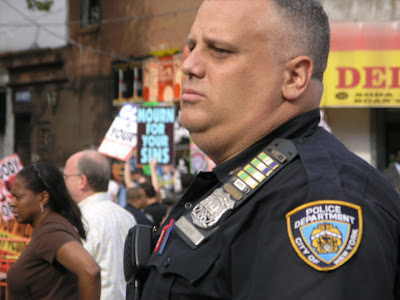 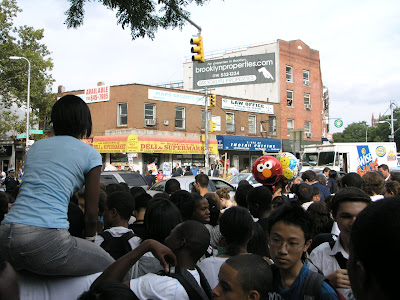 Ah, my favorite douchebags. I didn't realize that God hates Jews in addition to Obama and teh gayz.

I swear, they are so pathetic.


It's early, and I need coffee.

Too, too, too funny. The SciBlogs gang's gonna have a field day with this.

Also... WBC is British or something? "Neighbour"? Really?

Eric, God doesn't just hate maps - He hates ANYTHING that requires critical thought and a healthy compassion for the human condition.

Get with the program, you liberal hippy.

Nathan, look at the image you posted of the website text again. "Neighbour," "honourable"--do they spell "color" with a "u," too? Take lifts up to the third floor? Perhaps their real reason for opposing birth control is that they insist rubbers should only be used on pencils.

What a bunch of assholes. Two years ago a few of them showed up her in IL to protest the funeral of a friend that got shot at NIU just because she happened to be in the classroom that some other major asshole decided to shoot up. In that case the town lined up all their snow plows to block where the douchenozzles were going to be protesting so no one could see them.

I personally love the language of the post. It's a "We're coming to your town to show you bitches how God hates you. Oh, BTW, you better be nice to us and 'behave.'"

So, I brought this baseball bat because God loves team sports, and I wanted to demonstrate the proper swing to knock one out of the park.

My last job was in an office tower overlooking CNN's main building here in Atlanta. On a very regular basis we'd hear shouting, or drums, or yelling over bullhorns, look out and discover there were protesters in front of CNN Center-again.

Worse, the main group would take up the corner & sidewalk on the CNN side of the street and the opposition would be across the street in front of the park. This of course guaranteed them coverage on CNN at some point. Some times we could tell who was protesting what, sometimes not. These fools were regulars!

The police would form a motorcycle line in front of the park entrance and observe. After a while they'd tell them to move on, and if they didn't, well, APD has a precinct in CNN center to cover CNN, the park and the two arenas. They'd just call in the paddy wagons and load 'em up!

But, man, those ejits could really fuck up your lunch plans. Yep, you got it - Lunch central in that part of town is the CNN Center food court!

Eric, I believe the British put rubbers on their feet, over the shoes, when it rains.

I'm glad so many people came out to anti-protest. Yay NY!

ntsc, they also use rubbers to wipe out mistakes.

ntsc and Michelle, these asswipes need to use Americanized rubbers because 1) it's the American thing to do and 2) we really don't need any more of their ilk anywhere.

Hee! Explains so much.