So, this morning, I was trying to find a specific doorway. I know what it looks like and I know what avenues it's between and I know it's in Chelsea. So, even with that rough idea, I should be able to look at eight blocks or so on Google Street and be able to figure out exactly which street it's on before venturing out to find it in person. Right?

Well, when Google sends out their little camera cars to get the shots of streets and some bastard parks a truck with a mural of a totally different neighborhood on one of the blocks...uh, not so much.

Yeah, that'll save me some shoe-leather. 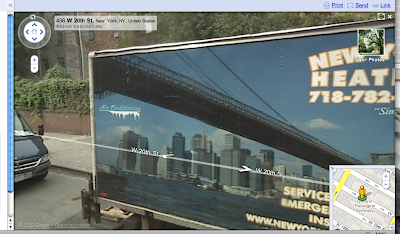 Or, to paraphrase Homer Simpson..."Ah, the internet; the solution to and cause of all of life's problems."
Posted by Nathan at 11:41 AM

AHAHAHAHAHA! Too funny. Hey, what is that bridge doing on my front lawn...get off my lawn!!

Having worked investigating client accidents, google street views come in very handy when you're trying to figure out how an intersection is configured. Amazing how many times the police report, written by an officer on the scene, is simply wrong. It may have the mechanics all wrong, or state there was or was not a feature. The street views often were the difference between the attorney taking the case or not.