I've got an idea. How about a phaser? A low-stun setting at just the right moment might do the trick.

There are times when I'm convinced that every time some other responsibility on set occurs to somebody and there isn't any obvious department to assign it to, Locations gets the chore. One of the little things we're responsible for (that you might not have thought of) is Security. There are any number of times that a movie production might need Security -- watching dressed sets overnight, watching equipment on the streets during the day, keeping fans back from celebrities. All of these are valid reasons to hire a Security company, but frankly, finding good companies is a pain in the ass.

First of all, not too put to fine a point to it, but most Security companies supply you with fairly expensive "paid witnesses", or at best, a guy who knows the cops' phone number. Honestly, that's an acceptable level of competence. Granted, I've had a couple of really good companies -- a retired Navy Seal with a bunch of highly trained Rottwielers in Oakland comes to mind -- but I've had others who were either really bad or just plain useless.

On a music video for a Rap artist, I had a Security Company quit because they were afraid of the rapper's friends. On another job, I had to fire the Security Company because I found three of them beating the crap out of some guy in the middle of the street. (He wouldn't drop the donut he was trying to steal from Craft Service.) An extreme lack of a sense of proportion is a disqualifier in my book.

Another issue I have with Security Companies is the question of uniforms. I tend to like to keep things low key. I prefer something like a T-shirt with "Security" written on it, or maybe the name of the company. A wind breaker is fine too. I don't like having a bunch of guys hanging around set looking like rent-a-cops. I did a job a few years ago at one of those stilt-houses in the middle of Biscayne Bay. (This may actually be the one we used.) 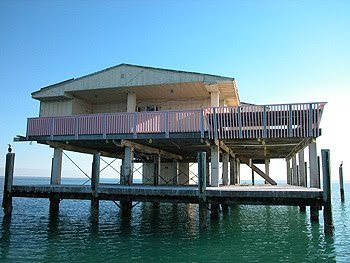 We had three barges full of equipment docked there including all of the cameras, generators, lighting and props we'd need for the shoot. We were informed that even though these houses are a good 20 minutes from shore, if we didn't have Security, everything would be gone by the time we came back in the morning. So I found a company willing to have a Security guy show up at a marina for us to pick him up in a boat and bring him out to stay overnight. I usually don't go for armed guards, but the company didn't want him out in the middle of nowhere all night un-armed, so I said O.K. I told them I didn't care about appearances; in fact, the guy should just bring a lot of coffee and something to read overnight -- it wasn't likely that someone was going to sneak up on him as long as he didn't fall asleep.

So, at the end of the day, the last boat is coming out from shore to bring the guard and to shuttle me and the last few people back to shore and there's this guy standing in the prow, posed like Washington crossing the Delaware. As he gets closer, I can see that he's dressed like this: 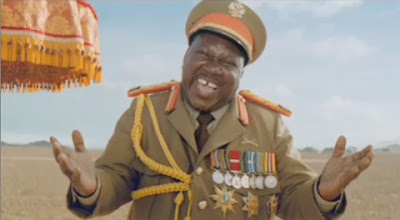 He wasn't wearing a tie though -- He had on a bright yellow cravat!

So, now, I'm thinking that maybe I've been wrong all these years. Maybe low key and discreet is exactly the wrong idea. Maybe I should be hiring a company with the most flamboyant, ostentatious and garish guards possible.

What I need is StarFleet Security! 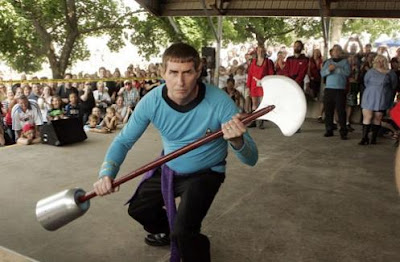 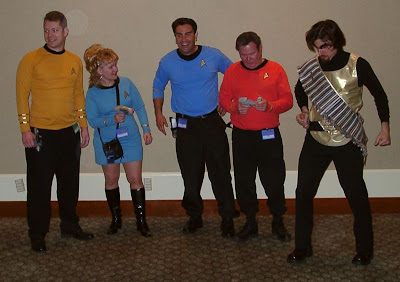 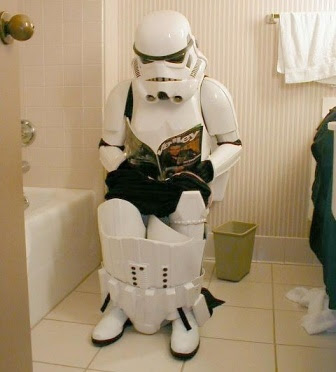 Besides, even Star Wars defenders agree that the Storm Troopers were pretty damned incompetent. 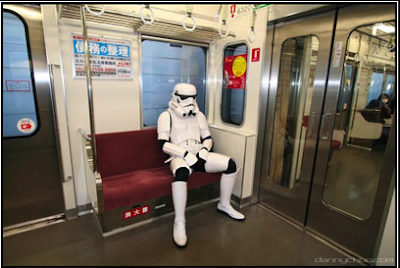 Sure, Stormtroopers were incompetent, but you think Federation security was any better? Poor Worf was the Worst Klingon Ev-ar (dude got his ass handed to him in nearly every episode of Next Generation until they finally just gave him a job pushing the button to launch the torpedos, and he even managed to mess that up by missing or doing no damage with computer-guided photon torpedos--not sure what those actually are, but they sound like they would mess shit up, right? Well not with Worf on the button). And redshirts? It's like they only existed to get killed by salt-leeching aliens or the Addams' butler. Sheesh.

What you want is the guys who designed the Cube. At least that's what you want for home security. For location security, I dunno--invisible razorwire that can only be evaded by math is probably a bad idea. Actually, now that I think about it, knowing how you are about math, you probably don't need the guys who made the Cube doing your home security, either. You'd probably end up on fire or sawed-up into little pieces or sawed-up into little pieces on fire or something. So nevermind. I got nothin'.

Hey Nathan-
Judging from those photos, you're really down here in Atlanta at DragonCon and didn't want any one to know. Hmph.

No Wendy. But my GoogleFu is mighty.

You'd be amazed what fishermen can do, given enough cover of darkness. :p

I never had any doubts about the ability or willingness of some people to steal us blind. I just doubt that if they were showing up in anything big enough to actually accommodate their swag, they'd be rowing out. I figured they'd make at least a little noise getting there.