You are never getting your flying cars. Never!

And because you're idiots and you'll never get your flying cars, neither will I. Thanks! Thanks a lot! IDIOTS! 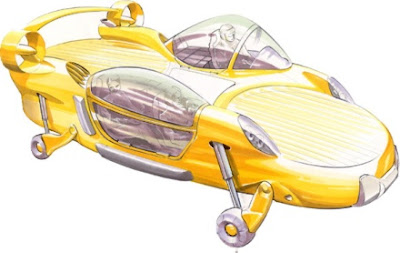 illustration courtesy of these guys.

Look at that thing. Wouldn't that be sweet? But since a bunch of you are IDIOTS, none of us is ever going to be George Jetson. (I didn't think that sort of thing was fair in first grade, but my opinions didn't do me any good then either.)

Allow me to explain this to you just a little more. The U.S. population is a little over 300,000,000 right now. Without any scientific explanation (or research), let's eliminate, oh 50,000,000 as being too young to drive or to old or in a vegetative state or totally blind or whatever that prevents them from getting a regular old drivers license. That leaves us with 250,000,000 potential drivers and if we want to be conservative, we'll say that, oh, 30% of those people don't have a drivers license for some odd reason or other.

This leaves us with the completely made up (or as academia would call it, pulled out of my ass -- aka POOMA), number of 175,000,000 drivers on U.S. roads every day. That's ONE-HUNDRED SEVENTY-FIVE MILLION drivers on the road. Granted, there are a lot of roads, but for some reason POOMA further reveals that of the 87.369% of licensed drivers who take to the roads each day, fully 96.137% of those choose to drive on only 79.804% of the available road space. (I bet you didn't know that POOMA was so specific -- Well it is. Accept it - idiot!)

That means that 146,989,387.1777499979 drivers are operating all in the same place every day. (That number has a margin of error of plus or minus 3. Sometimes Gertrude Krapovski of Brookings, Iowa decides to walk to the market without notifying us and this throws things off a little.)

But back to the point -- that you're idiots and keeping me from getting my flying car. Every day, all over America, you guys are running into each other and into stationary objects at an alarming rate. C'mon, that building and that road and that stop sign have been in the same exact spot since two years after you were born and suddenly, today, it surprised you? PUTZ! 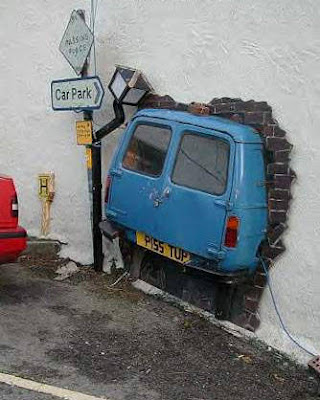 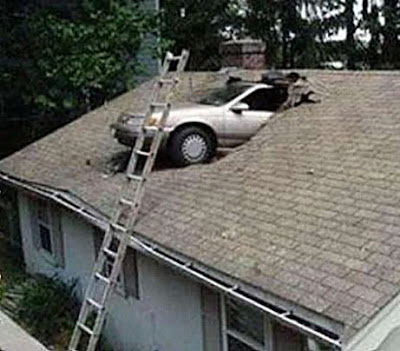 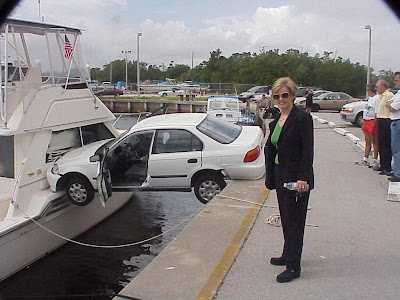 Now, sticking with my most excellent POOMA skills, I can tell you that there are 614,000 licensed pilots in the U.S. (Hah! fooled you. I actually looked that one up!) That 614,000 includes private pilots, recreational pilots, commercial pilots, helicopter pilots and even friggin' glider pilots. These guys also manage to smash into each other on occasion and to smash into stationary objects (uh, like the ground), more often than would be considered optimal. (Anyone who wants to start babbling at me about how much safer flying is than driving can just keep it to themselves. There are almost 300 drivers for every single pilot -- of course it's safer up there.) And they don't even have to worry about running into ditches when they're trying to avoid each other. They're not limited to the width of the road they're on -- they can go up, down, left, right -- they can go freakin' anywhere to avoid running into stuff! And somehow, they still manage to do it.) (It's beyond my POOMA skills, but I'm curious how many licensed pilots are involved in traffic accidents every year. That's not a guy I'd be eager to fly with.)

In the early days of motoring, some places enacted laws saying you had to have a flagman walking in front of your car to avoid collisions...and they still managed to run into shit. 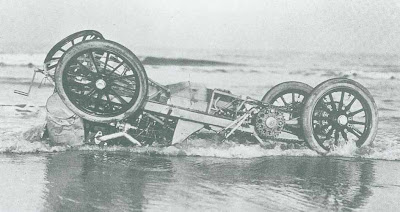 So, here's the deal. I'm never going to get a flying car and it's your fucking fault. I realize there will be advances in collision avoidance systems and air traffic control and all sorts of things, but I maintain that your ability to be an idiot (which will probably only become more profound), is going to keep the rest of us from having flying cars for generations to come.

You're a blight on the advancement of humanity!
Posted by Nathan at 11:26 AM

No flying cars? Count your blessings. If we had those things, they'd be crashing into each other and plummeting out of the sky to slaughter innocent civilians by the thousands. We've got enough problems dodging drivers preoccupied with yakking on their cell phones -- imagine the carnage if they could take their endless conversations to the skies.

Yeah, I'm still pissed I'll never get to stay on the lovely space station hotel shown in 2001: A Space Odyssey or play tourist on the Moon.

Flying cars would be nice, but I suspect they'd have to have some kind of autopilot to be allowed in the skies, to say nothing of the vertical layering that would have to be created so everyday cars would not collide with jumbo jets landing...think Fifth Element-esque vision of future NYC traffic.

Michael, That's sorta the point. I know you've got to be a conscientious and talented driver, but now we all have to suffer because the rest of those jerks can't be trusted.

Did you dump the finger-paints on little mary-sue in first grade? I didn't think so. So why should you have to miss the assembly with the balloon animal guy? It's just not fair!

I'd just as soon skip the flying car and head straight to the instantaneous matter transporter, complete with McCoy-like angst.

Of course, I have my jetpack.

I would like to think that if there were any pilots who were involved in traffic accidents every day we would (hopefully sooner than later) take their driver's license away from them. Those people should be confined to the sky where they belong!